My Misadventures with the Oscars

My late-ish thoughts on the 85th Annual Academy Awards.

Fellini, about the Oscars from Fellini on Fellini


- I was not feeling the Oscars till about 1 a.m. last night and then I could not fall asleep due to the excitement. This was a bad thing since I had to give a film studies exam after eight and a half hours and I had officially stopped giving a shit.
- I woke up at 5:30 a.m. after having slept for only two and a half hours give or take. I was going to start studying but I decided to go on Twitter and Tumblr instead and start freaking out over everyone's dresses. 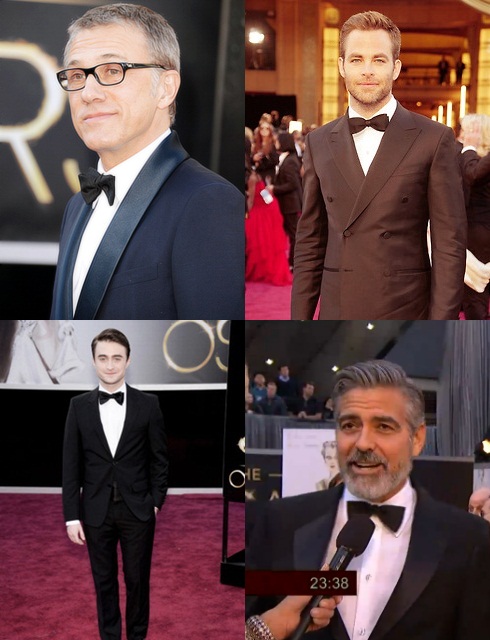 - Kristen Chenowyth was so annoying on the red carpet. Someone tranquilize her.
- Anne Hathaway, why? It will forever be known as the nipple dress. Ask the twitter account.
- So anyways, show starts.
- I can't come to a conclusive opinion on Seth MacFarlane's hosting. It was incredibly offensive most of the time and many jokes fell flat, but his musical stuff and the random jokes in between were pretty funny. I don't hate him though. Just the song "We Saw Your Boobs". Maybe because I did not expect much.

Truer words have not been spoken.

- Tommy Lee Jones laughing!
- Speaking of the good stuff, Charlize "The Goddess" Theron dancing in a flowy gown (with Channing Tatum) followed by a number by Daniel "My Dream Husband Since 2001" Radcliffe and Joseph "Adorbs" Gordon-Levitt (and Seth MacFarlane) were just awesome. I forgive the entire ceremony just for these two things. - I liked the Flight-sock puppet thing.
- First award of the night, Best Supporting Actor, went rather deservedly to (though not my first choice) Christoph Waltz. He quoted Tarantino. Most successful Tarantino actor ever.

- Did anyone think of Leo?
- Oh Paul Rudd and Melissa McCarthy = worst presenters ever. Which did not even make sense because they are usually adorable and hilarious but I could not understand what the hell was going on. Paperman and Brave won though, so yaay for animation!
- A number of The Avengers came to present the visual categories. No Chris Hemsworth, ScarJo or Hiddles though. Once again, I must request the Oscars to give Robert Downey Jr. as Oscar for being himself.
- Worst win of the evening- cinematography. For two years now, this award has been given to the wrong person. I mean, Roger Deakins in Skyfall was beyond spectacular. Someone give him 10 or 20 Oscars already.
- Visual effects for Life of Pi made sense because Richard Parker is a beauty (even though I officially want James Bond to kill him now).
- Orchestra kept playing the Jaws theme to make the winners shorten their speech. It was funny the first time with Life of Pi and all. After that, it was plain rude.
- Anna Karenina won Best Costume and Les Mis won Best Make-up. I agree on the first one though I wish Ishioka would have won. The latter is a pointless category because Cloud Atlas was not nominated.
- The James Bond tribute was mainly shit. None of the Bonds even came. However Dame Shirley Bassey was on!
- The direction was all over the place. They cut to De Niro and Bradley Cooper after some black thing and then didn't show reaction shots for any of MacFarlane's jokes. I heard people laughing. Dunno :/
- Documentary was given out. That dude with that awesome accent was awesome.
- The musical tribute- Catherine Zeta-Jones has still got it. Jennifer Hudson got a standing ovation- what? She was just screaming.

At this point I had to leave to go give my exam. I thought it was a clever decision to leave before Russell Crowe started to sing. Anyways, I was incredibly annoyed throughout the exam and I wrote at breakneck speed and with total disinterest. I should pass but I couldn't care less. Once I finished, I tried checking the results on my phone but the goddamn thing had to die on me then (technology sucks balls) and then I stood like an idiot for fifteen minutes waiting for the traffic flow to change when it wasn't going to for another hour. The ride back home was long and irritating and hot. However, once I was near functional technology again, I was very happy with the results.

- So back to the point I left off. Another good reason to have gone before the Les Mis number-

WHAT IS AIR?! I could not have concentrated on my exam if I had seen this before. I really liked the entire performance. Even Russell Crowe couldn't ruin it.

- Chris Pine! I wish he would have presented with Benedict Cumberbatch though.
- Ugh Ted and Jew jokes. Anyways, aren't the computer generated stuff on the Oscars totally awkward for the audience?
- ZOMG TIE!! Skyfall :)
- Did anyone else think that all the Zero Dark Thirty clips were huge spoilers for the people who haven't seen it yet?
- Question- what if someone had a proper fear of sharks? What would the Jaws theme do to them? I think Fassy is terrified of the film.
- Christopher Plummer is brilliance. "Pick someone your own size." Haha. Also, wasn't Amy Adams just terrifying in The Master? I was happy at Anne Hathaway's reaction. It was genuine. Also, "It came true" is one of the best openings to an Oscar speech ever.
- Popcorn ladies are here again!
- Oh those lucky bitch college students. Man, Hugh Jackman and George Clooney were in that crowd.
- Sandra Bullock's hair accessory was gorgeous. Just saying. Happy Argo won editing. Also, Silver Linings Playbook had terrible editing. Why was it nominated?
- I love that Jennifer Lawrence introduced Adele. She's a huge fan, as she said in the Jimmy Kimmel interview.
- Adele is so perfect. All these people got to see her perform live! :P She was actually singing also, and not screaming. Although, apparently screaming ensures a standing ovation. Really people?
- Nicole Kidman is such a class act. She's a genuine fangirl. Tarantino looked really pissed though. - Daniel Radcliffe presented with Kristen Stewart. I didn't realise she was on crutches (through no fault of my own). They played the Harry Potter music. Thanks for remembering after 10 fucking years, Academy.
- Salma Hayek's introduction was so funny. As was Meryl Streep's later on.
- George Clooney is lovely. He presented In Memorium. I cried. Nora Ephron :( Also Barbara Streisand was really good.
- Chicago crew came to give the music awards. RICHARD GERE! Life of Pi won Best Original Score and "Skyfall" won Best original Song. Oh god, I love Adele. - He and Charlize are neighbours :O
- Poor Leo. Of course he is not there.

- Oh Jane Fonda and Michael Douglas came to present Best Director. I would love for Fonda to introduce me. She's so theatrical, it's great!
- Yaay Ang Lee won! He seems like the sweetest man who ever lived. He said some of the funniest things. Re: the cast- "I can't waste time talking about them" and about thanking his lawyers- "I have to do that." Also, NAMASTE DUDE! 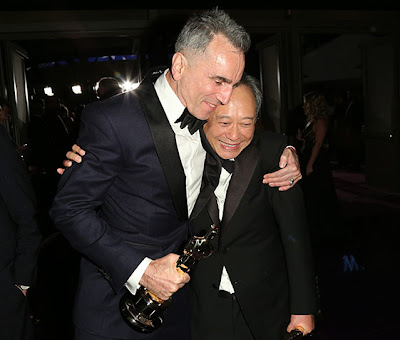 Ang Lee and DDL are the nicest people ever.

- Jean Dujardin is a cutie. YAYAYAYAY JLAW! And she fell, but it was okay because Jean Dujardin, Hugh Jackman and Bradley Cooper all ran to her rescue. And her speech was really endearing given the circumstances. "Happy Birthday Emmanuelle!" - Did Meryl Streep even look at the envelope? Also, Joaquin Phoenix at the Oscars everybody-

- Daniel Day-Lewis is the first man ever to get three Best Actor Oscars, and though I did not care for his Lincoln performance (the voice annoyed me too much), it could not have happened to a better man and actor. His jokes were brilliant. Next film should be a comedy with Meryl, amirite? Ben Affleck's speech was the best. I was watching his and bezzie Matt's Good Will Hunting win yesterday and this is another classic. My favourite part was him thanking the lovely Jennifer Garner, "I want to thank my wife, who I don’t normally associate with Iran, but I want to thank you for working on our marriage for ten Christmases. It’s good. It is work, but it’s the best kind of work and there’s no one I’d rather work with." George Clooney was just the classiest man throughout.

- The final song was nice.

And there you have it. The winners were pretty good and the hosting was somehow still tolerable and ZOMG DANRAD AND ENJOLRAS!