"You may see me only as a drunken, vice-ridden gnome whose friends are just pimps and girls from the brothels. But I know about art and love, if only because I long for it with every fiber of my being."

It has been a good five or six years since I first saw Baz Luhrmann's musical romance Moulin Rouge!. It was one of those experiences that change our lives forever- we think different, see things in a new light, understand ourselves better. You may think that I am over-exaggerating, but I was (am) young and impressionable...and boy that film impressed me! I felt right at home with the revolutionary Bohemians of the Moulin Rouge, and found kind of soulmate in Christian- a Romantic to the core who, without any influence as such, just naturally believes in truth, beauty, freedom and above all things, love. However, when I was watching it today for The Film Experience's Hit Me With Your Best Shot, I also found myself identifying with Satine... "Why live life from dream to dream, and dread the day the dreaming ends".


Therefore you see how this film that often tells me more about myself than almost anything else. So it was a real dilemma to chose my favourite shot, there are just so many things to love in this film. For instance:


1) The sublime beauty of Nicole Kidman as Satine. 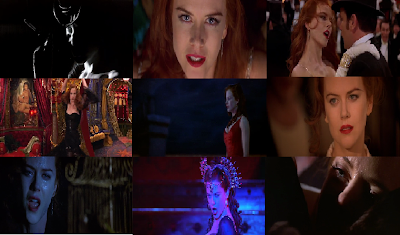 3) Obviously the absolutely gorgeous El Tango de Roxanne, which has everyone screaming at some point, deserves to be shown.

While all these are fantastic, I am now left with two finalists. One is an actual shot within the film, another is a set of six shots that come in the end of the credits.

The Best Shot- This really shows the magic of the film. Here are two people standing on clouds, with an umbrella, the Eiffel Tower and the moon with a face on it in the background. The scene happens when Christian, played by the wonderful Ewan McGregor, is wooing Satine by "Your Song". A melody sung from his heart, for hers, and she is swept away so much so that she imagines a completely unrealistic, yet dreamy place where both of them belong together. I think the background pays homage to the great musicals of yesteryears...the umbrella from Singin' in the Rain, rooftop from Mary Poppins, the Eiffel Tower for An American in Paris, and well the singing moon. I love films which transport us to places, and this singular shot takes me to a wonderland of romance and delight.

The Best Shots- Seriously, this is the favourite part of the film for me. I especially wait for credits to end everytime I watch Moulin Rouge!, because it is incomplete for me until I see these final six shots. I weep, I smile, I feel warm- why? Because these shots reaffirm my belief in the world. The fact that what these wild Bohemians believed in is not something the world has forgotten. We sing the songs that they sing- from Bowie to Kiss to Madonna. Their anthems are our anthems now; art and beauty and freedom and love prospers. It is a little hard to notice with all these Dukes lying around, but come what may, everything the film and its characters holds so dear still exists. That is what the story is all about, and I ardently love it.
Moulin Rouge! is 10 years old now, and I do hope it goes down in cinematic history as the beautiful love story with a Bohemian Can Can twist and a total tribute to the great songs of the 20th century. I mean honestly as lovely as the shots are, the film is nothing without its songs. Do watch and listen!
Posted by Nikhat at 12:15 am