"You know, the only thing that kills the demon... is love." ~ FAVOURITE COUPLES IN TARANTINO FILMS

Quentin Tarantino's name is, by most of us, automatically associated with violence, blood, drugs, Samuel L.Jackson, basterds, awesomeness etc.- and that totally makes sense. However... I also think that Mr. Tarantino is quite a Romantic. So he doesn't have the "You jump, I jump, Jack" thing, rather an "You execute, I execute, Pumpkin" ideal but it ain't love without some madness, right?
These are my favourite couples from QT films:

5) Shosanna Dreyfus and Fredrick Zoller (played by Mélanie Laurent and Daniel Bruhl)- The doomed relationship. He was a Nazi hero, she was a Jew whose family had been hunted down and killed. I found it really sweet how he kept trying to impress her, or as much as his Nazi ego would allow. The last scene between them is so tragic- I mean I understand why it happened the way it happened, and how great it looked, but it would have been interesting if they had hit it off...till the cinema burned down atleast. 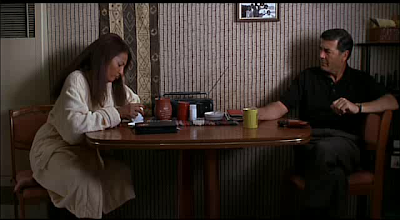 4) Jackie Brown and Max Cherry (played by Pam Grier and Robert Forster)- I found both of them very sexy in the film. I loved how Max instantly falls for her, and practically puts everything in the line for her, while she tells him all her plans. I have learnt not to get very attached to QT characters in the sense that their deaths might cause me distress, but throughout the film I was silently praying that Jackie and Max don't die. QT, ofcourse, never disappoints. Great chemistry, great roles. 3) Clarence and Alabama Worley (played by Christian Slater and Patricia Arquette)- It was a match made in Sonny Chiba-heaven. Clarence, the comic book store clerk meets Alabama, the rookie call girl, and they instantly fall in love. Sure their love leaves behind a trail of dead pimps, drugs, crazy Sicilians etc. but that's the way romance is.

2) Mrs. Mia Wallace and Vincent Vega (played by Uma Thurman and John Travolta)- Vincent is told by his boss Marsellus Wallace to take his wife Mia out for a fun time. So he does- they talk, drink 5 dollar shakes, win the Jack Rabbit Slims Twist Contest, and he ends up saving her life when she ODs on his stash of heroin. Perfect evening. Okay so they're not really a "couple-couple" and don't particularly harbour romantic feelings towards each other, but they are just so brilliant together. I saw the film Pulp Fiction quite late, but I think I've always known the dance scene, and I've always wanted to be them. They are probably one of my most favourite couples ever, but just because of the non-romantic aspect of their relationship, they lose top spot in the list. 1) Mickey and Mallory Knox (played by Woody Harrelson and Juliette Lewis)- Both of them, in my eyes, are the quintessential QT couple. They're violent and murderous and mad, but also they can die and kill for each other. Harrelson and Lewis are extremely convincing in their insanity and insatiety, and they make the characters their own. Sure Mickey and Mallory go on a killing spree and what not, but this line come on!-
"We'll be living in all the oceans now."
Posted by Nikhat at 10:26 pm