"You are the only mystery worth solving."

This week's episode "Hide" was a more stereotypical scary story. Although "Cold War" was much more frightening, I loved the atmosphere this episode tried to evoke- the entire haunted manor setting with psychics and candlelight. However, as everything is in Doctor Who, there were aliens involved, and like one of my favourite episodes of this series "A Town Called Mercy", there are a lot of parallels drawn to the dark, dark world of the Doctor. 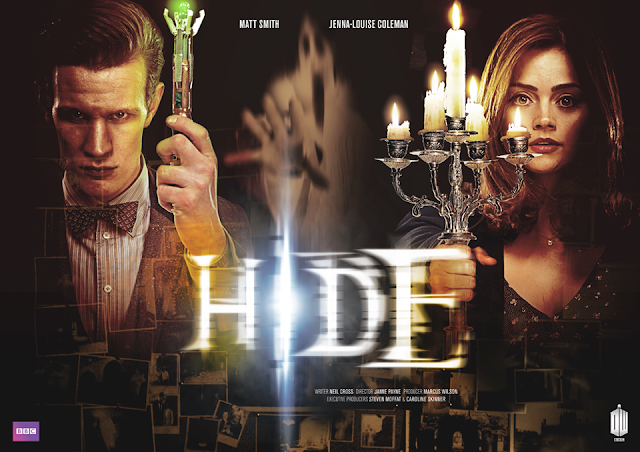 1) I loved that this episode chose to focus on its characters. Apart from the Doctor and Clara, we had Dougray Scott (who I have been watching all week on Hemlock Grove) as Professor Alec Palmer and Jessica Raine as the telepath Emma Grayling. Both were v. good. The episode started with both of them trying to call the spirit of the Caliburn mansion, called the Caliburn Ghast or The Witch of the Well in local folklore. She comes and goes, leaving both Alec and Emma very shaken. And then the door knocks and who is there but our very own Ghostbusters, the Doctor and Clara.

2) Btw, who else remembered Ten and Rose at the Ghostbusters part? *sniff*
3) So the Doctor and Clara start snooping around. I really love how unique Matt Smith's humour has become when it comes to the Eleventh Doctor. "I love the word toggle. Nice noun. Excellent verb."
4) So Alec was secretly from military intelligence. Like "A Town Called Mercy" there are many interesting parallels drawn between his character and the things he has done in the past and that of the Doctor's. Similarly, his relationship with Emma is all sorts of awkward adorableness, that is a total opposite of the easy flirtation between the Doctor and Clara. But there are secrets in both the relationships.
5) As I wrote in the intro, the episode is fantastic in terms of the old school spooky house horror it tries to evoke. Examples- 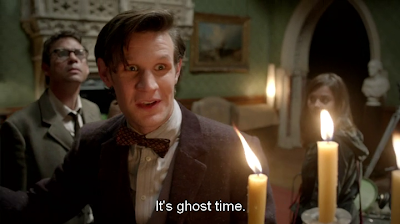 6) Alec tells them about the history of the Caliburn Ghast, which has existed since Saxon times. Clara notices how in all the pictures taken of the Ghast, her position never changes. She is pretty scared but she asks the Doctor to dare her into going snooping along with him. Gah these two.
7) The house starts to get colder. Clara feels like someone is holding her hand and both her and the Doctor race back to Alec and Emma when a black disk materializes in front of them. At the same time a sort of portal opens in front of Emma of a forested setting and the Ghast and then the words "Help me" appear and just as secretly disappear on one of the walls. Spooky.
8) The boys and the girls separate and have discussions of their own. When Alec talks about being responsible for sending so many people to their deaths and being the only one alive among their ghosts, it strikes a chord with the Doctor. He says that he would thank them if he had a chance. And between Clara and Emma, Clara assures Emma that Alec definitely has feelings for her, those that stick out "like a big chin". Emma, howeve,r is less than hopeful about any romance that could happen between Clara and the Doctor as "there is a sliver of ice in his heart" and is not to be trusted. Ooo what does this mean?
9) Now comes the science-y part. The Doctor and Clara race to the TARDIS, which still apparently doesn't like Clara. According the Doctor it is like a cat and takes time to trust one. Obviously.
10) The Doctor takes out his orange spacesuit from Ten's episodes such as "42", "The Impossible Planet"/"The Satan Pit". I love Eleven's disappointment at Clara hating it. Daww.

11) What the Doctor does is take the TARDIS at all points of Earth's history at that spot, from its beginning to its end, and take pictures. This is all fun and rolicky for the Doctor, but it really affects Clara. She calls him out at this, about how he doesn't seem to care that he saw Earth's entire lifecycle begin and die in front of them and how all of his companions must be buried somewhere out there and how they are in fact, ghosts for him. As a reply, the Doctor says one of the best quotes of this season and well, a total pick-up line- "You are the only mystery worth solving." I guess this applies to humans in general and Clara in particular.

12) Also I must say that this was Jenna-Louise Coleman's first episode to as Clara while shooting and she is especially wonderful at this part.
13) This entire hullabaloo (I love that word. I should use it more often) was because the Caliburn Ghast is in fact not a ghost (duh, it's Doctor Who. Like Scooby Doo but with aliens) but a woman, Hila Tukaris, trapped in a pocket universe where time moves much slower than in the normal universe. The Doctor explains all this using balloons!
14) Anywas, she is running from something and Emma, being a powerful telepath, is her only way back to the normal universe. The TARDIS would get stuck there it seems since the pocket universe is collapsing.
15) So instead the Doctor makes a device for Emma using the Eye of Harmony from the planet Metebelis III. There was a huge hue and cry on the internet about how it's pronounced MetEEbelis and not METebelis but seriously, it's a proper noun and get over it. This helps open the portal to the pocket universe, the "well" if you will and the Doctor crosses over, saying "Geronimo" of course, in a tethered vest that is supposed to help him come back.
16) The Doctor finds himself in the forested area which is very misty and eerie as well. He goes around looking for Hila and when he finally does, he has lost the exit. Emma, who is in a lot of pain but still wants to help, creates an echo Caliburn mansion in the pocket universe where the Doctor and Hila race to to escape whatever is in the mists. Hila goes through but unable to sustain the pain any longer, Emma gives up before the Doctor can crossover. The TARDIS cloister bell begins to ring. Uh oh.
17) I am going to stop here but before I do, I must mention the talk that TARDIS interface has with Clara before letting her in. The TARDIS, in an awesome fabulous bitch move, guises itself as Clara herself to talk to Clara as it claims that she only holds herself in esteem. Haha, Clara and TARDIS- frenemies 4eva.

18) Also the fact that the Doctor in fact came to Caliburn mansion not to bust ghosts but to talk to Emma about Clara, about who she is. Emma says that she is just an ordinary girl who is more scared than she lets on. The plot thickens.

The final twist of this episode felt both unnecessary and necessary to me. I kind of like it when Doctor Who is romantic, though this episode might have been wayyy creepier, in a good way, without it. Still, it led to another excellent quote that can be more than applied to the Doctor- "Every lonely monster needs a companion." Sigh.

I am also getting more and more certain that Clara's entire mystery has something to do with Rose. "It's the oldest story in the universe - this one, or any other. Boy and girl fall in love, get separated by events- war, politics, accidents in time. She's thrown out of the hex, or he's thrown into it. Since then they've been yearning for each other across time and space- across dimensions." I just have a feeling this especially holds true for Doctor's relationship with Rose. Also the repetition of Clara being a ghost, and the TARDIS not liking her because she probably is an anomaly like Captain Jack Harness.

Neil Cross really outdid himself with this episode. Not only was it a perfect blend of horror and sci-fi, there were a lot of allusions to the character of the Doctor and how he is, in a way, haunted by the ghosts of his past. They also kept it quite light, especially owing to the infectious chemistry between Smith and Coleman. I know I write this in almost every recap, but Smith is really becoming a better Doctor episode by episode, and this one proves it too.

The look of the episode was perfect, as I wrote above. Director James Payne did a great job. Both Scott and Raine were very good too, especially in their subtle romance and insecurities and feelings.

Next week is one of my most anticipated episodes of this series, one that will hopefully shed more light on Clara's enigmatic character. It's time to take a "Journey to the Centre of the Tardis".