Doctor Who is an awesome show. However, once in a while, there are a few missteps. "The Rings of Akhaten" isn't a bad episode, it looked great and had interesting ideas in motion, but it tried to do too much and failed to reach the standards it had set for itself. 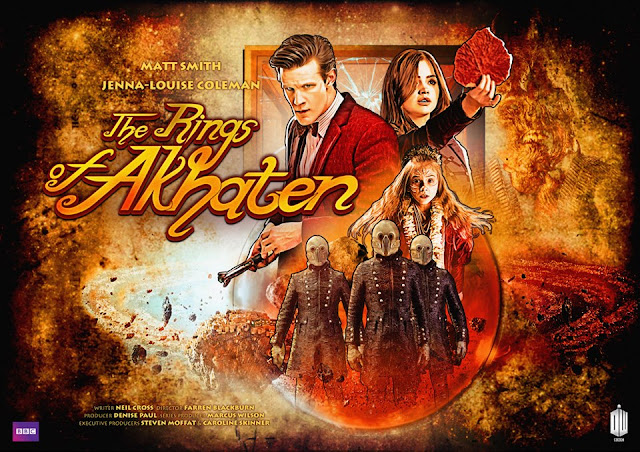 1) The episode starts with the Doctor secretly following Clara's entire life so far- from her parents' first meeting to the death of her mother. While it shows Clara's very adorable backstory, I thought, as did apparently most of internet, that it was a tad creepy for the Doctor to be doing such things. Anyways, this helped explain one of the missing ages from Clara's, or actually her mother Ellie's "101 Places to See" book, since Ellie died when Clara was 16.
2) Also, the leaf which she said was page 1 in the previous episode leaf is shown to be the cause of her parents meeting, and is thus the "most important leaf in earth's history". It's a lovely concept, but how does that make it a page in a book about places?
3) So Clara finally comes aboard the TARDIS, all excited and inquisitive.
Clara: So what’s it made of? Time? I mean, if you can just row right through it it’s got to be made of stuff like jam’s made of strawberries. So what’s it made of?
The Doctor: Well not strawberries. No. No, no, no. That would be unacceptable.

4) She demands to go somewhere awesome and so the Doctor takes her to the Rings of Akhaten, a place where seven planetoids orbit a huge planet Akhetan, and have aligned themselves in a very long time for the Sun-singers of Akhet to sing to a god in a pyramid situated in one of the planetoids where they believed all life in the universe originated from.

5) I loved Jenna-Louise Coleman's Clara at this part. While I am partial to Karen Gillan's Amy because of the redhead-ness, I think Clara is very pretty too with her big eyes and super-shiny hair.
6) So Clara asks the Doctor if they can see the planet up close and he happily obliges. Then we find ourselves in an alien souk which was very cool. So many aliens! 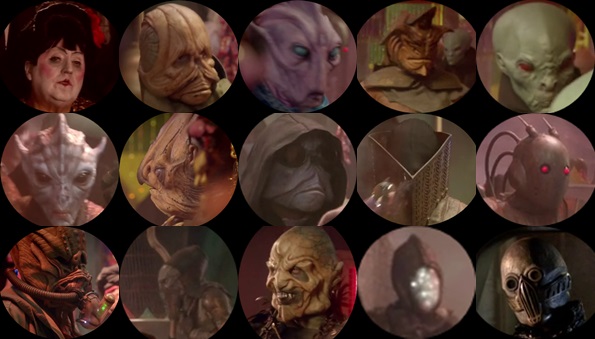 7)The Doctor informs Clara that he had come there a long time ago with his granddaughter.This ofcourse is Susan Foreman who used to be the companion of the First Doctor. For a second there I thought it was a clue to who Clara might be, but I think the writers are looking back at earlier stories because of the upcoming 50th Anniversary.
8) Many a time when I watch Doctor Who, I think they put in situations just because they want to see Matt Smith act like an idiot. Which he does brilliantly, whether it be the pelvic thrust handshake (?) with the Terrabeserker of the Kodion Belt or barking at Dor'een or making stupid faces like this- 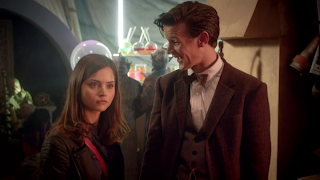 9) Clara then runs into a little girl, Merry Gejelh or the Queen of Years. The young actress who played Merry, Emilia Jones was very good. 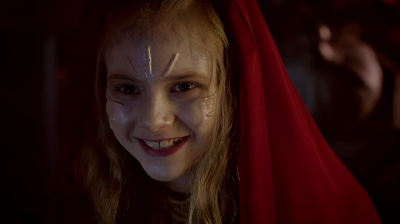 10) Merry is scared of Clara at first but since she is great with children, Clara befriends her and tells her a story about how scared she was when she had gotten lost, but her mother had made her feel safe and defeat that fear. Merry is afraid of messing up the song she has to sing to Grandfather, or the god that lives in the planet, but Clara assures her that she will be fine.
11) This episode is most unexpectedly almost like a musical. The songs *are* pretty, but I still would have liked something with more oomph. Murray Gold and the singers did a wonderful job though.
12) So Merry starts singing to Grandfather, with the Doctor, Clara and all the aliens listening. They all join in too and offer gifts with personal memories to feed the god, since the currency of that place is things with memories and sentimental values.
13) However, the chorister in the temple stops the song, thus making the god pull Merry towards itself. Actually, he was to feed on her pure soul and memories, since she carried the entire history of her people.
14) The Doctor and Clara rent a moped from Dor'een paying Ellie's engagement ring in return, and follow Merry to the temple. The Doctor manages to open the "really quite astonishingly heavy door" to the temple and Clara tries to reason with Merry, but she is convinced that she was the one who made a mistake in the song and hence should be fed to Grandfather. The Doctor has to close the door behind him leading to what I feel was one of the many cultural allusions in this episode-

15) The Doctor convinces Merry that she does not need to sacrifice herself because she is unique and this was all a plan and Grandfather isn't a god but a vampire. He tells her what is probably my favourite theory in physics, the fact that we are all made of stars, and also quotes Lewis Caroll in the process.

16) They start to leave but the creepy Vigil come to force Merry to feed her to the vampire. One question though. If Merry knew all this was to happen due to her vast knowledge of songs or whatnot, why would she act surprised at all? Anyways next, the Doctor got Expelliaramused.

17) So Clara and Merry escape through a secret song that the latter knew and the Doctor joins them, only to realise that the vampire isn't the god, but in fact a sort of alarm clock for the actual god, Akhaten itself. This was reminiscent of a Tenth Doctor and Martha Jones adventure "42" where there was a living sun as the villain, except that was about the evils of exploiting nature and "The Rings of Akhaten" is about blind belief of people put into religious practices that aren't in fact godly, but quite evil instead.
18) Both Clara and her mum have a catchphrase "Oh my stars." Does this mean anything?
19) The Doctor tells Clara to return to the planet with Merry as he has to face the god. This led to some of the most gorgeous Doctor Who effects I have ever seen. 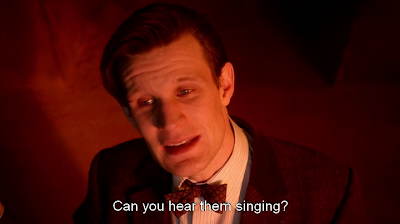 21) The Doctor decides to feed the god all of his memories. Matt Smith is beautiful in this part, talking about all of his memories and everything that he has lost to get them. I think it was a very apt speech considering that this story places a lot of value on sentimental things, and the reason why the Doctor doesn't own any of them is because he has lost everything and everyone he has ever cared for. This is why he is such a tragic character, for all the stupid things one can associate him with. I cried at this part.

"I have lived a long life and I have seen a few things... I walked away from the last great Time War. I marked the passing of the Time Lords. I saw the birth of the universe and I watched as time ran out, moment by moment until nothing remained. No time. No space. Just me. I’ve walked in universes where the laws of physics were devised by the mind of a madman. I’ve watched universes freeze and creations burn. I’ve seen things you wouldn’t believe. I have lost things you’ll never understand. And I know things. Secrets that must never be told. Knowledge that must never be spoken. Knowledge that will make parasite gods blaze. SO COME ON THEN! TAKE IT! YOU TAKE IT ALL, BABY! HAVE IT! YOU HAVE IT ALL!"

212 Also, love the mention of the secret. Whatever is it??
23) But apparently this isn't enough for the god or the writers, so they bring Clara back, who gets some moped action of her own. She presents the god with her parents' leaf which represented all the opportunities that her mother was deprived of because of her early death. This proves to be too much for the god and it implodes.

24) Clara and the Doctor return and she remembers that he was there at her mother's funeral and asks him about it, and so he tells her that she reminded him of someone who had died. Once again I really felt for Clara when she tells the Doctor that she is not a stand-in for someone else and he has to accept her as herself. I was really happy that she said that because it was getting a bit Vertigo-esque.

This is funny though :P

I think the biggest issue this episode had was that as tradition shows, this was to be the companion-centric episode where they prove that they are worthy of travelling with the Doctor. However, then they gave Eleven that wonderful speech too and all that it entailed. Therefore, the episode failed to focus properly on Clara or on the Doctor, which is why it suffered. Maybe if they would have gotten a simpler story for Clara and then done this episode later on, it would have been better. I did like the show's take on religion, where it didn't expressly say that it was a bad thing, but that sometimes it can be used to exploit the innocent because of their beliefs. The story was written by Luther's Neil Cross and I think he has potential to do better.

I have already spoken about the music and how that didn't completely work for me.  Direction-wise, I was a little annoyed with all the close-ups. Of course it was a spectacular-looking episode, from Akhaten itself to all the excellent aliens and their hair and make-up. Emilia Jones was wonderful and as was Coleman. Smith shined in that speech of his but had very little to do otherwise.

Next up, we have a Mark Gatiss story with Liam Cunningham guest starring, set in a nuclear submarine and marking the return of a Classic Who villain, the Ice Warriors. I am really counting on "Cold War" to be awesome because Clara still hasn't had that kick-ass episode yet.