"Could you just ask me that question again?" "Doctor Who?"

It's Doctor Who time again! I know I skipped the recaps of the last two episodes because "Angels Take Manhattan" bore a hole through my heart and "The Snowmen" wasn't all that interesting except for our second meeting with "the woman twice dead"- Clara Oswin Oswald. But I promise to do my zany recaps for all the new Doctor Who episodes. So let's get started with "The Bells of St. John". 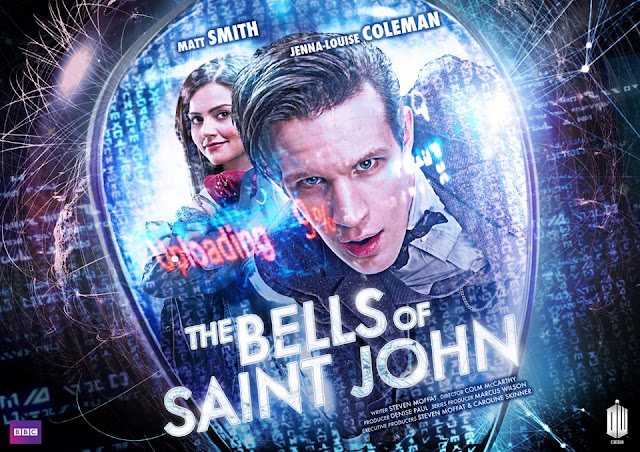 1) The episode starts in a "Blink"-esque way with a character called Nabile warning the the people of earth about a Wi-Fi connection which has strange symbols, which once clicked, sort of sucks in the soul of the person into the network and they gets trapped in there, not knowing where they are. Nabile knows this because he too has been "uploaded" into this Wi-Fi trap.
2) There are new opening critics btw, which are based on the classic Who series. They were first shown in "The Snowmen". 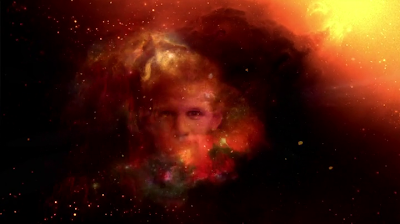 3) So the Doctor has been hiding out in an abbey in 13th century Cumbria, and trying to figure out who Clara is, when the bells of St. John start ringing and he is roused from his meditation. 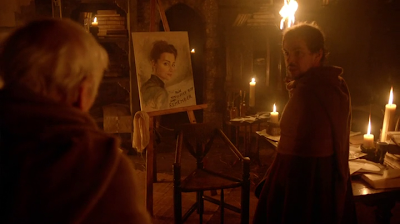 4) And now, we meet Clara proper. She is taking care of children again, as she did in "The Snowmen" as a governess, and is having problems with the internet so calls "the best helpline in the universe", which is *obviously* the TARDIS, a St. John Ambulance telephone box.

5) Oh the book that Clara tells one of the kids to read is "Summer Falls" by Amelia Williams. AMELIA WILLIAMS, PEOPLE! I totally missed it at first but then had a huge freak-out. She speaks about how chapter 11 is her favourite and one cries their eyes out in it. What? What does this mean? MOFFAT, STOP PLAYING YOUR MIND GAMES! 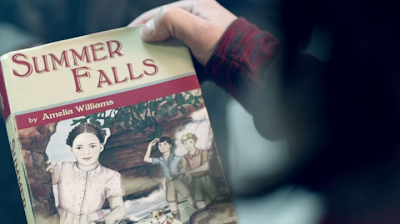 6) I was reading reviews of the episode and many people have been speculating how this entire episode could have been inspired by a telephone conversation, and I can definitely see that. Clara keeps talking about how she can't find the internet and the Doctor is first extremely baffled and then irritated by it, though once Clara enters the password, everything changes. The password is "rycbar123", or "Run You Clever Boy And Remember 123". Ooooooooooooo.

I found this really funny, Idk why.

7) Clara muddles up and then accidentally clicks on the same evil Wi-Fi that Nabile was talking about in the beginning.
8) Though the Spoonheads are the monsters of this episode, the villain is Ms. Kizlet, a ruthless but quite brilliant business head who is running this whole operation. Celia Imrie was absolutely fantastic as her.
9) The Doctor turns up just then, monk costume, floppy hair and all and is overjoyed to see Clara, who does not remember him, but he keeps asking her to say "Doctor Who" because he realises how much he likes the sound of that, only to have the front door shut on his face.

10) The Spoonheads in themselves are actually kind of creepy, unlike what the name suggests. One shows up in Clara's house, in the guise of the protagonist of "Summer Falls" and then she rotates her head to reveal the spoon, that is actually a walking base station that hoovers (whovers?) up people and starts to do the same to Clara. 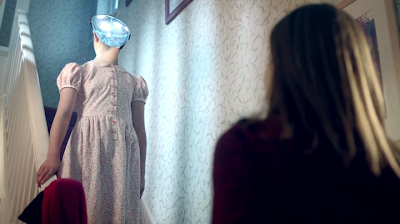 11) The Doctor in the meantime returns to his "mobile phone", ditches his monk apparel- "Monks are not cool!" and gets a whole new wardrobe. For some reason, I found the whole wardrobe change part very attractive, mostly because Matt Smith.

12) The Doctor finds Clara unconscious and being uploaded and stops it just in time, going into crazy typing mode and then saves her, while sending Kizlet and co. a message very reminiscent of what he had said to the Atraxi in "The Eleventh Hour"- "Under my protection" and signs it off as the Doctor, which worries Kizlet and she contacts her clients.
13) Btw, shouldn't the Doctor not publicize the fact that he is THE Doctor, since he is supposed to be dead and all? I know he's erased all of his records, but surely people remember?
14) Eleven taking care of Clara is adorable, as is him taking in the aroma of a jammie dodger. He flips through one of Clara's books, "101 Places to See" which records all of Clara's birthdays except her 16th and 23rd ones. What does this mean too? There is also a leaf that seems to confound the Doctor for whatever reason (more on that later).

15) There is another lovely conversation between the Doctor and Clara when she finally wakes up and sees him under her window (sigh), where he is guarding her after having spoken to her dad about the government and inventing the quadrocycle. Btw, isn't that a car?

16) So Kizlet and co. still want Clara and they light up the entire suburb by switching on the people and switch off all of London, making them a perfect target for... an out-of-control plane. The Doctor tells Clara to get into the police box with him, which she has now christened the "snogging booth" or for short, the "snog box". Then there is the much expected "it's bigger on the inside" moment, which was slightly disappointing after "The Snowmen", when that Clara goes "it's smaller on the outside". Also, the TARDIS is a total nightclub now. I like it.
17) Just as how the Doctor does it, instead of flying them out of safety, he flies them into the plane and then flies it even though he doesn't know how, 'cuz you know, he's awesome and all.
18) The internet at this time though fell in love with Clara...'s tea cup. Brits :D

19)The Doctor also then drives an awesome motorbike across London and he and Clara go to a cafe to find the location of Kizlet and co. When Clara had been partially uploaded into the Wi-Fi network, she somehow absorbed madcap computer skills. Seeing Doctor and Clara fight over her laptop was hilarious where the Doctor claims to have 27 brains to get his way, but Clara wins.

20) Some of the Doctor's finest moments come at this time when he asks Clara about her being a nanny and not doing "young things with young people" to which she answers "What like you? Down boy," the total meaning of which hits him gradually and much to his shock. I love their flirting. Also the Doctor acting like a 5 year old when he sees chocolate cake.

Can I just say, the Doctor stole my dance movies.

21) Kizlet then starts hacking into the people of the cafe and telling the Doctor her plans, while a Spoonhead in the guise of the Doctor uploads Clara completely.
21) At this point, I will stop. There is a very cool ride up the Shard, which is where Kizlet and Co. are located, thanks to Clara Oswald "FTW Oswin"'s computer genius, and him saving the day.
22) Kizlet and co. are shown to be working for the Great Intelligence, the villain of "The Snowmen" with a very welcome cameo by Richard E. Grant who has fed on the human minds and grown. It might be the big villain of the remainder of the series, which I think is cool because it too works with people not being to see it and the power that wields, like quite a few of the Moffat nemeses.

Now for things I loved about this episode. It was written by Steven Moffat and directed by first-timer Colm McCarthy. Moffat, in continuing with the blockbuster idea of this series, went with an urban thriller this time with more than a few shades of James Bond, what with a character like Kizlet and the Doctor being a badass with the anti-grav motorbike. This episode was also a part social commentary in the present age of people being sucked into their virtual worlds. "Human minds trapped like flies in the World Wide Web, stuck forever, crying for help." "Isn't that basically Twitter?" McCarthy was very good in capturing the urbane feel of London a la Sherlock. I especially liked how well-handled the plane sequence was.

Coming to the cast, let's start with Imrie as Kizlet. She was brutal but in such a fabulous way. She had some of the best and most darkly humoured lines in the episode like "The abattoir is not a contradiction. No-one loves cattle more than Burger King." OHHHHH BURN! And her final scene is just spine-chilling.

Next comes Jenna-Louise Coleman as Clara Oswald. As I said in my Clara post, she is becoming a fast-favourite of mine. This Clara is a slightly less feisty version of Oswin from "The Asylum of the Daleks" but is still very fun. Her flirting with the Doctor is especially fun and also calling him out on the ultimate pick-up line of all time- "All of time and space, right outside those doors" or variants thereof, which let's face it, we will all fall for. But Clara doesn't, or at least doesn't show it and asks the Doctor to come the next day to ask her again, in his "snog box". Also, is the etymology of Oswin really from FTW? Like seriously, Moffat? The leaf in her book is page 1 and as we can see in the poster and pictures of next week's episode "The Rings of Akhaten", it will feature there.

Finally, there is the Doctor. Matt Smith is becoming even more and more unique as the Doctor. From the floppy hair as the mad monk to his joy at picking up a bow tie, to his awkwardness around Clara, to being the dark timelord that he is- he is perfect. This episode allowed the Doctor to be rather goofy at times, and Smith shone there. Plus, I love the fact that he is sort of smitten with Clara, rather than the other way round. This is going to be fun!

So there you have it. They also have new music now which I feel is quite modern. All of this is of course leading up to the 50th Anniversary in which *insert loud triumphant music* DAVID TENNANT AND BILLIE PIPER ARE STARRING! YAAAYYY! AND JOHN HURT! YAAAYYY! This picture was released today and it is literally everything because a) hot British men b) to see them act opposite each others, as their Doctor-selves, will be quite the event of the year.

Join me next week as the Doctor and Clara go on their first adventure to the amazing planet of Akhaten.
Posted by Nikhat at 1:52 am