"Now there will be a second red planet. Red with the blood of humanity!"

Last week I wished for Doctor Who episode 7x09 "Cold War" to be awesome, and it gives me great pleasure to say that yes, it was freaking brilliant! Mark Gatiss's best story yet, with the fantastic return of a Classic Who villain and one of the scariest episodes of Doctor Who so far- ah it was bliss. 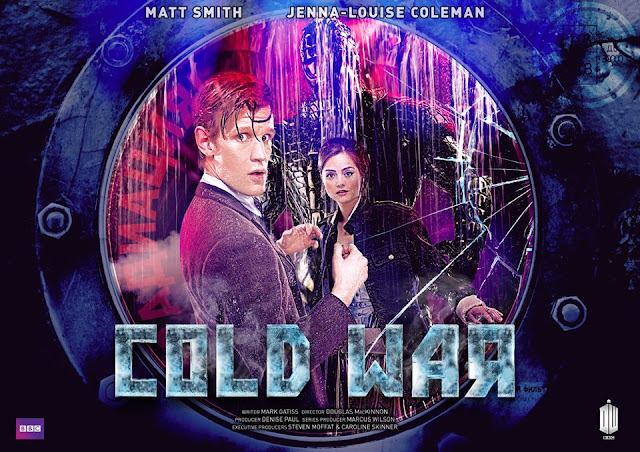 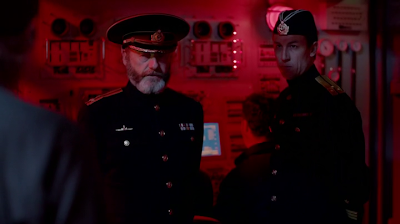 3) Though both these actors and their soldier characters were good, I adored David Warner as Professor Grisenko the most. Ultravox 4eva!
4) Oh man, that idiot shipmate (submarine-mate?) who decides to unfreeze the Ice Warrior. I mean yes, he didn't know it was a Martian from 5000 years ago and thought it was a mammoth instead, but still, why must he thaw out a mammoth in a submarine, thousands of miles from home?
5) This results in the Ice Warrior attacking the submarine and the people in there and the submarine starts to descend out of control. And right then the TARDIS materializes. Obviously.
6) The Doctor looks awesome in his glasses. And Clara looked so adorable and young in this episode. They were on their way to Las Vegas but instead find themselves in a sinking Soviet submarine. 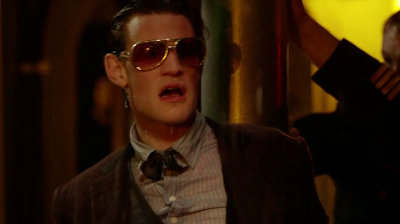 7) The Doctor saves the ship from descending further and they sort of land on a rocky terrain, underwater of course. The Doctor Who team used a big model of the submarine to do all the external shots. V. cool.
8) Woo hoo 80s! Everything's bigger baby! Why the fuck does the Doctor carry a Barbie?? Also the TARDIS flies away.
9) The scene where the Doctor realises that the Ice Warrior is standing behind him is hilarious. "What is that, gas? Could be gas? Ah."
10) So basically the Ice Warrior isn't just any Ice Warrior, but their greatest hero, Grand Marshall Skaldak. The Doctor tries to soothe out the differences between him and the submarine's crew of Russian soldiers, hence "Cold War", but Menzies's war-loving character Lt. Stepashin shocks Skaldak with a cattle prod. The Doctor quickly tells them to chain him up because well, they're screwed.
11) Okay so short version of who or what an Ice Warrior is-

12) Anyways Skaldak is very shocked to find out that he has been buried in the ice for 5000 years and he sends out signals to his race.
13) Also, then it's time for another "Flying with the Doctor" lesson for Clara when she realises that she has been speaking Russian all this time because of the TARDIS translation matrix.

14) The Doctor tells Cunningham's character Captain Zhukov that he must go and try and appease Skaldak and how Zhukov can't go because he will recognise that he is a soldier and become hostile. Zhukov asks Doctor if he won't do the same with the Doctor, which I thought was very cool, because after all he is "the Oncoming Storm". I have always found the Doctor's persona as a soldier of peace very interesting, because even though he can and has destroyed worlds, he does it for the greater good, how much ever it haunts him.

15) So obviously, Clara goes in. Her salute is adorable.
16) She tries to speak to Skaldak, who tells her of his daughter and their first battle. He realises that the Doctor is speaking through Clara and starts addressing him. While all this is going, Clara keeps moving in closer to the tied up Ice Warrior, only to then realise that he has left his suit of armour or as she later dubs "shellsuit" and is out. The Doctor tells Clara to get out of there immediately.

16) As he rescues Clara, Skaldak has escaped into the submarine and is very dangerous, as he believes that his people have abandoned him and he has nothing to lose. Even the Doctor has never seen an Ice Warrior without its armour on.

17) Okay random bit of trivia regarding Matt Smith and submarines. His directorial debut, Cargese which is a TV show, stars Submarine star Oliver Tate. Oooo.
18) So Skaldak is running amok the ship, trying to glean information about the submarine, which as it were, is a Soviet one with loads of nukes in it. So they do have a lot to lose.

19) I loved the Alien feel of this episode. Skaldak minus armour was genuinely terrifying.

20) There were even glimpses of blood as Skaldak apparently "disassembles" the soldiers trying to find out information. Herein of course lies one of the biggest differences between a show like Doctor Who and one like Game of Thrones. One is a children's show, even though it is becoming scarier, and the other one happily shows nipples and hands being cut off. 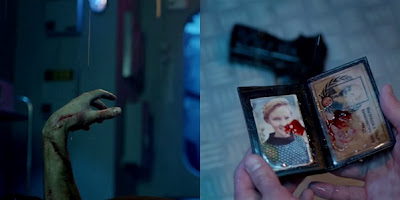 21) Still, this makes Clara realise that it isn't all sunshine and daisies travelling with the Doctor and this is pretty much the first time that THIS Clara sees real danger.
22) Love the part when the Doctor tells Clara not to wander off, and SHE DOESN'T! :O

23) Now I don't want to give the rest away except *obviously* the Doctor and Clara save the world, making it another "Flying with the Doctor" lesson.

Now before I give my final thoughts about the episode, some geeky speculations. What did people think about Clara singing "Hungry Like The Wolf"? Does Rose aka Bad Wolf have anything to do with this? A lot of it maybe coincidences but I am pretty convinced that Steven Moffat has left frustrating clues all over. Do remember- 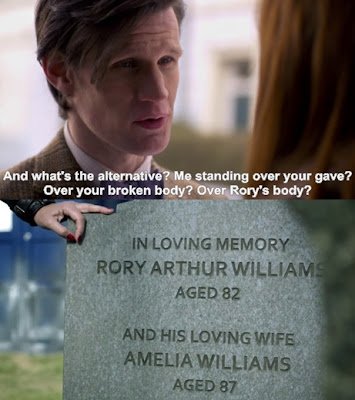 Also Doctor's Barbie doll, which people have suggested looks like Rose. I am sorry but that is one of the creepiest things ever if true. And finally, there is the red setting of the sonic screwdriver as seen towards the end, which is something that River Song had told the Doctor about in his first meeting with her in "Silence in the Library"/"Forest of the Dead". 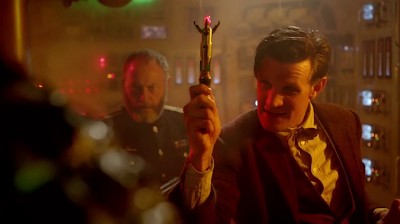 Now coming to the episode as a whole, I really enjoyed it. It was one of the scariest Doctor Who episodes that I have seen, and the best one written by Mark Gatiss so far. I have already spoken about how it reminded me of Alien in many parts. Also, as it seems is the aim this series, there are bigger issues being spoken of here, about the Cold War and whatnot. This episode coincidentally aired in the week of Margaret Thatcher's death too. Apparently there were a lot of nods to Patrick Troughton's era as the Doctor. I don't watch Classic Who but as I said last week, I think they are putting references to previous Doctors in preparation of the upcoming 50th anniversary.
Matt Smith, Jenna-Louise Coleman and Nicholas Briggs as the voice of Skaldak were on top form. I loved that the episode never became too dark and had its running jokes, but also took itself with utmost seriousness where it had to. The look of the episode was fantastic, from the submarine's interiors to the revamped Ice Warrior. Director Douglas Mackinnon did a wonderful job.

Next week, Neil Cross returns with his ghost story "Hide" which is apparently spookier still.

Can't quite decide what to make this a reaction gif of...