Making the Case for Best Ensemble Cast for The Avengers 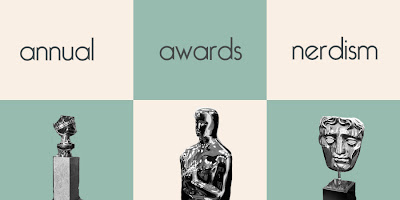 Stevee at Cinematic Paradox has come up with an excellent blogathon in which we get to write about films that will not feature highly in the awards season that is more or less already upon us.

Now most cinephiles I know are greatly obsessed with awards, including yours truly. We immediately start thinking "Oscars" when we like a particular element of a recent film. Stevee's blogathon is tapping into this habit of ours and taking it further to mostly be about the films that won't actually make it through even though we want them to. It is kind of depressing to write about them because our convictions will not translate into physical awards in most cases, but it is also kind of relieving because at least we have voiced our support. I commented on Stevee's post about how I wish she had done this blogathon last year and all my feelings towards the Harry Potter films and their relationship with big award shows would have gotten a much needed avenue. Still, I am glad she has started this brilliant blogathon  and for this year, I will make a case for The Avengers getting nominated for the Screen Actor's Guild Best Cast Award. 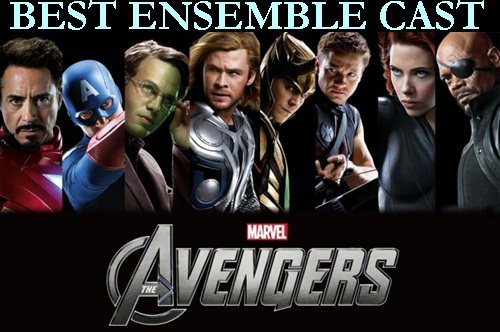 Having just watched the superhero blockbuster bonanza that is The Avengers for the fourth time, I am still amazed by the fact that it works so well. And the biggest reason for that is the cast. I do indeed find it hard to believe even now that a film with these many heroes, many of which have been the star in their own more than adequate films, can use each and every one of them and the other characters this economically. Every person in the film has their specific role to play- no one is wasted, no one overexposed.

Each character and actor has his or her own fan-following after the film, who can actually justify their choice. Robert Downey Jr. as Tony Stark/Ironman is, as someone said, one of the most ideal casting choices of the last decade- he is hilarious and heroic. Bruce Banner/Hulk finally gets the perfect duality between a being a being a big green rage monster and a meek genius thanks to Mark Ruffalo's acting chops. Scarlett Johannson's Natasha Romanoff/Black Widow is one of her best performances to date. The dry wit and total badassery is to die for. Chris Evans was born to play a superhero, and his Steve Rogers/Captain America is as courageous and sincere as ever. Chris Hemsworth's Thor makes one truly believe that he is some sort of a god- he just looks and feels that mighty. One of the biggest surprises of the film was Jeremy Renner's Clint Barton/Hawkeye, who in spite of being the new comer to the group, fits right in and gives off this aura of cool. Samuel L. Jackson as Nick Fury makes even the cheesy lines sound infinitely awesome (a stereotype, but still a total fact). Clark Gregg as Agent Phil Coulson ends up being the hero for many people, because he is the ordinary man in these extraordinary circumstances, and Gregg owns that role. Finally we have Tom Hiddleston's star-making turn as the villain god Loki who is just snarky and grand and a believable adversary for all these heroes. Even Stellan Skarsgård, Colbie Smulders and Gwyneth Paltrow are perfect in their minor roles.

Joss Whedon directs all these actors and characters in many situations where they verbally and physically spar and that further shows how evenly matched everyone is. Though obviously aided by visuals, the final action scenes with all the Avengers actually working together is so much fun and satisfying to watch. I say satisfying because we see the relationships and arcs of the various characters throughout the film and it is literally awesome to see them all come together at the end.

Now I know that The Avengers will almost certainly not even be considered for the SAG Best Cast Award. The fact that it is a superhero movie, its massive box office earnings, people's preference towards the other big superhero film of the year etc. will be massive obstacles in its path and I doubt even poor Hulk can remove them with all his strength. We will have the usual suspects being nominated instead, the "Oscar-friendly" kind, which isn't something I abhor but I wish people would look beyond that.

I will conclude by saying that a great ensemble piece is one in which every character, big or small, gets to shine but not outshine anyone and I truly believe that The Avengers, of all the movies that I have seen in 2012, achieves this best. 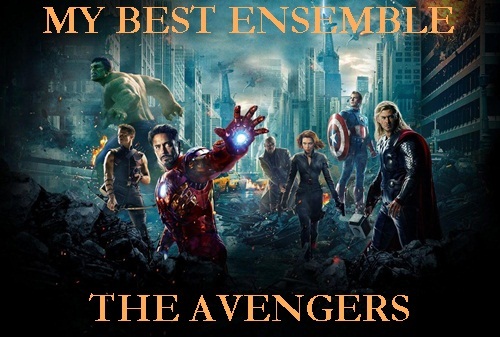