The power of denial is astounding, but it is time to face the facts and write this post. The time of the Ponds ended on Doctor Who with the fantastic "The Angels Take Manhattan". I don't think there is any point in me trying to recap the episode, since it has been out for more than two months now. Instead, I will look back on the run of Amelia Pond and Rory Williams, my very first companions and the longest-running ones in the modern Who series. 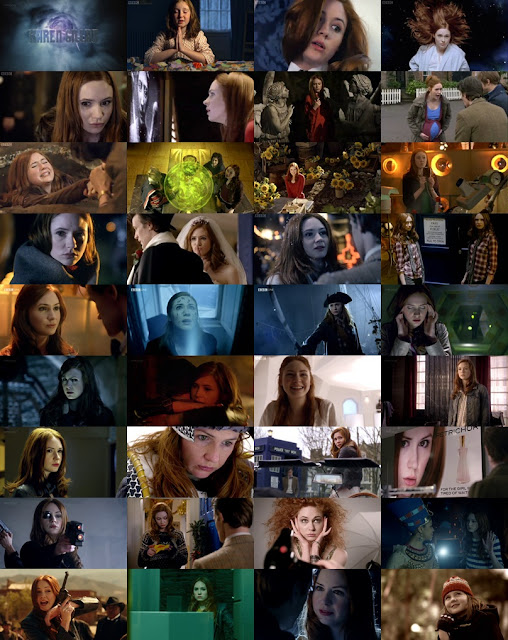 We first meet Amelia "Amy" Pond when she is seven years old, a Scottish redhead living in a little English town. The TARDIS crashes into her garden and out pops the newly regenerated Doctor, dressed in rags and begging for an apple. He promises to take her on adventures in his time machine after he fixes it in five minutes. Little Amelia sits all night in her garden waiting for this raggedy man to reappear, but he doesn't come. In fact he doesn't come until twelve years later, when Amelia has become Amy, the beautiful and feisty kissogram. Played by the gorgeous Karen Gillan, I think Amy is the best looking companion in the new Who. Amy's and the Doctor's adventures start then- she meets Winston Churchill, saves a space whale, becomes possessed by a weeping angel, inspires Vincent Van Gogh, and then when her fiance Rory joins the gang too, she has many many more of these unbelievable experiences.

Amy Pond was an awesome companion. She was fiercely brave, bitingly sarcastic, and a strong and sensitive woman. As 'the girl who waited', she spent a great deal of her run with a fear (literally) of having the Doctor abandon her like he did when she was a kid. Still, he is her bestfriend, and they have a beautiful, tender relationship because he was her childhood hero and she was the wonderful little girl who was the first person he met and cared for. Her other relationship, which is even greater than that with the Doctor, is with her husband Rory. Though unsure of the degree of her feelings towards him at first, we see how Amy falls more and more in love with Rory throughout her run.

The first series of Amy was probably my most favourite. She was young and wide-eyed and had a lovely chemistry with an equally youthful Doctor. Growing up with a crack in her wall, which was actually caused from the end of the universe, she was the crux of the series. The second series of Amy was not the best one in terms of realistic character development. Yes, she dresses like a pirate and gets kidnapped by aliens and so on, but she is a little unbelievable in her reactions to the crazy things that happen to her. This was when Amy stopped being my favoruite companion, but then the seventh series, which was Amy's last, happened. She came back with a bang and she was the sensitive yet badass Amy again. Her relationships with both Rory and the Doctor were at an all-time high and her farewell scenes were truly heartbreaking. 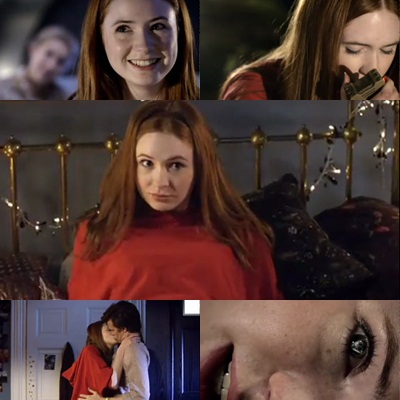 This, along with its first part "The Time of Angels" was my first encounter with the terrifying weeping angels. Though they are scarier in their usual form, I did think that being possessed by them might be the worst thing ever. Poor Amy gets possessed by one of them, but she still makes it through, even while walking in a creepy forest with her eyes closed. Then of course, she came on to the Doctor, which is both funny, and well, a bit of a dream. 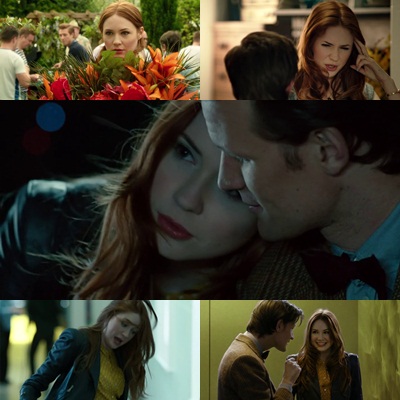 The more I think about this episode, the more I fall in love with it. Right before the last episode of the Ponds, we see what Pond life is really like and what happens when the Doctor comes to stay with them. Her fragile, complicatedly simple relationship with the Doctor is beautifully explored in this episode. Also I think this was the episode in which Karen Gillan looked the most fetching as Amy Pond. 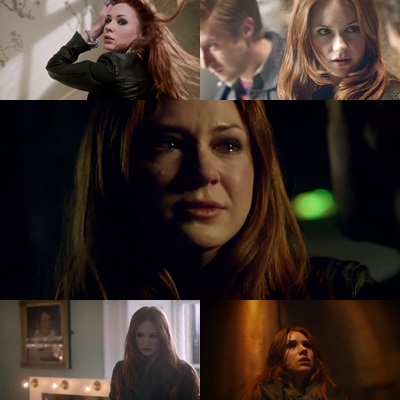 As I said, Amy had lost a bit of steam in the sixth series, but with the first episode of the seventh series, she comes back as her most mature and maybe damaged form yet. It starts shockingly with her giving divorce papers to Rory, and through this episode we see why she did so and how much she actually loves him. Heartbreaking performance by Gillan. 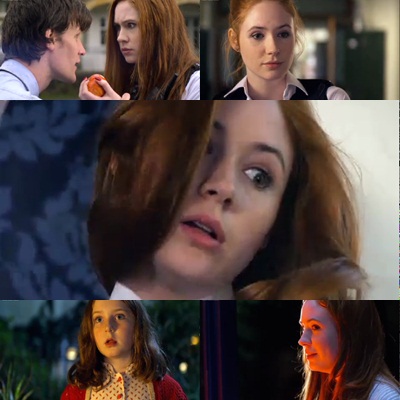 This was her first episode, and she was seared into my heart since then. I have never wanted to be Amelia Pond more. We all have our childhood fantasies, and hers actually comes back to get her on his time machine. Also Amy is so feisty and sexy in this. 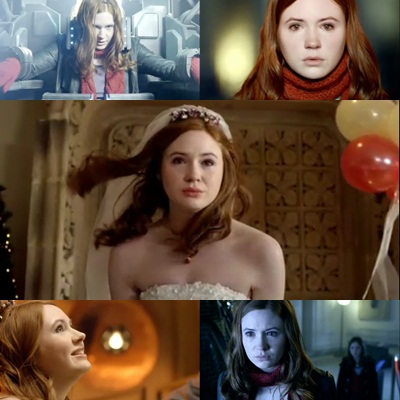 Throughout the fifth series, we find out more and more about the crack in the wall of Amy's bedroom and how it has affected her. We see how she ends up being the most important person in the universe- how her love waits 2000 years for her and how her imaginary friend is ready to be wiped from existence for her, but she brings everyone back and saves the day.

RORY WILLIAMS
"The boy who waited." 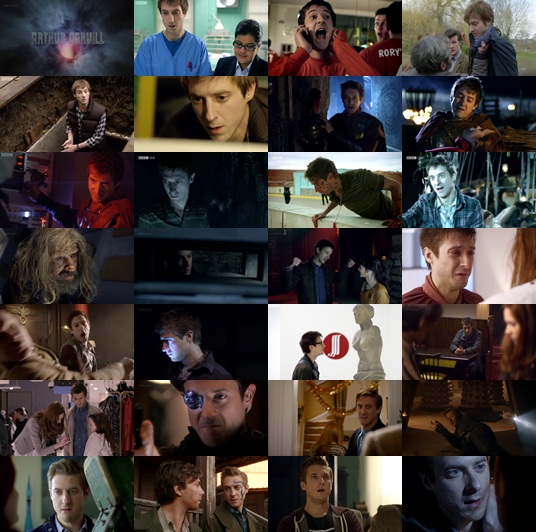 I think Rory "Pond" Williams in Doctor Who is almost how Ron Weasley was in the Harry Potter books. He started out as a sort of comic relief- slightly bumbling and confused, but slowly became the bravest, funniest, nicest and well, one of my most favourite companions ever. In fact, he is tied at the top spot with Donna Noble. A huge reason for that is the way the incredibly gifted Arthur Darvill plays him.

Rory is the sort of the perfect man- he is akin a hilarious knight who can live and die for his love. And by die, I mean die over and over and over again. It is kind of a joke that even Rory himself acknowledges- the number of times he has died in this show is ridiculous. But all that fades when one thinks about how he waited 2000 years outside a box to protect the woman he loves. The Last Centurion is mighty in every way. He has a consciousness that is even older than the Doctor.

Of course his relationship with Amy is to die for. Along with that, it is interesting to see his dynamic with the Doctor. Though always a bit insecure about Amy's closeness to the Doctor, he too can do anything for the man. In the seventh series, we also saw Rory with his adorable dad Brian, who for me is possibly the most tragic character I have seen in Doctor Who yet. His farewell scene, though necessary, were maybe a bit disappointing because I wish he had had a more emotional goodbye. 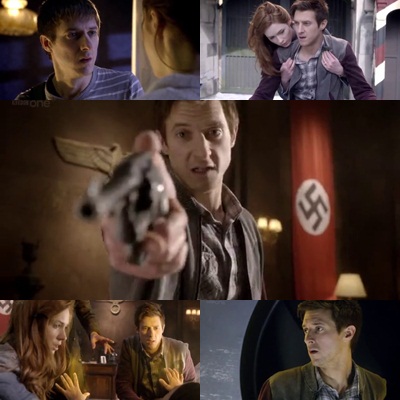 Because Rory is the coolest. I mean he friggin' punches Hitler in the face, man! I love this episode because it gives Rory a sort of edginess. He can punch the Führer and drive a motorbike with utmost ease. He is suddenly an action star, but with enough of his Rory-style humour left. 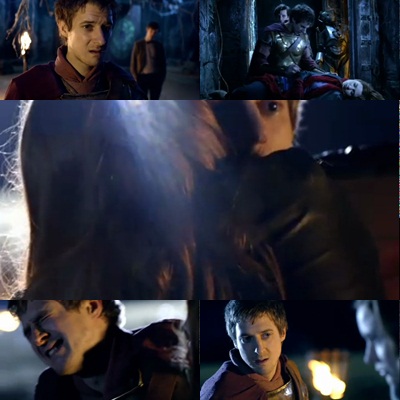 This is the return of Rory, and his first appearance in the Roman soldier uniform. Through all odds, he returns and perhaps more in love with Amy than ever. I love his struggle at the end. I think Arthur Darvill has the prettiest eyes. 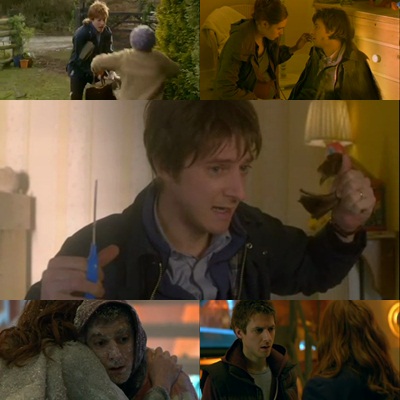 Why would a girl will choose a country doctor over the coolest being in all of universe? Simple. Because it is Rory. Rory, with his sweetness and caring and even a ponytail, battles with his insecurities over Amy's childhood infatuation with the Doctor but still does everything for her, and she realises her true feelings towards this magical man in this episode. 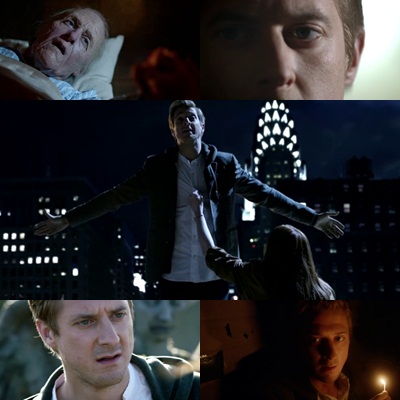 This episode culminates everything that we know about Rory- his deaths, his humour, his bravery and above all, his love for Amy. When Amy asks him if he would be able to let her sacrifice herself if it means that she wouldn't have to live to her old age without him, like he had just witnessed his own past/future self do, Rory's face and the way he says with utmost conviction, "To save you, I could do anything" just shatters me. Darvill is amazing here. 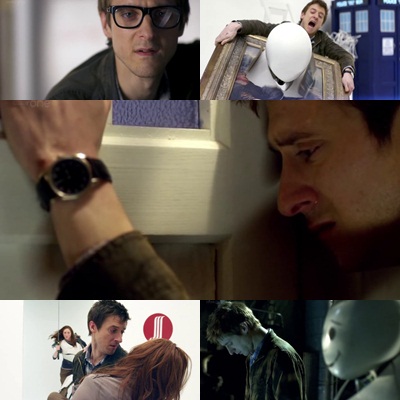 Yes this is a big Amy episode too, but for me, it is all about Rory's unparalleled love for Amy. He would love her at any age, however she looks and acts. The final moments in this episode, when the Doctor asks him to choose between old Amy and young Amy, and that he is forced to go with a choice, are so poignant. That may be the hardest thing that Rory has done in any episode and such love is just staggering. Arthur Darvill is phenomenal in this episode.

With this, I come to the end of the post. As much as I will miss Amy's boisterousness and her red hair, and Rory's humour and legendary nose, the thing I will miss most about the Ponds is their love for each other. Their's is one of the greatest love stories I have seen period, and I am so glad that that had a happy ending. 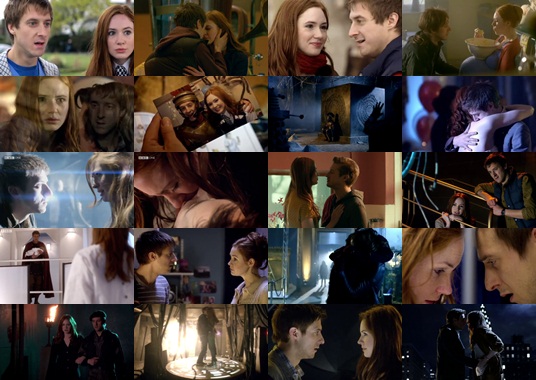