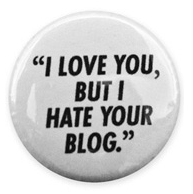 1) So I lost two followers within the last week... I totally understand why- I post really less and the quality of the posts aren't amazing, but to my remaining followers (and I sure hope you remain with this blog), I will honestly try to up the standards of Being Norma Jeane, including trying to post these Weekly Thoughts posts on time (sorry :-( ). I have been a little low on ideas lately, but I am optimistic about things changing for the better. Also the button in no way implies that anyone loves me; I just thought it was kind of funny.

2) On casting news, Ashton Kutcher will be playing young and hippy Steve Jobs in the biopic Jobs. I am not that against the idea. I'm certainly no Kutcher fan, but I don't think this project will be some big acting bonanza, so meh we'll see. But this article did make me chuckle quite a bit. Nicole Kidman will be playing Grace Kelly in a biopic about her trying to save Monaco from conflict with France in 1962. It will be called Grace of Monaco and it will be directed by Olivier Dahan, who made the lovely La Vie En Rose. It sounds fairly good and I love Kidman, but god January Jones was born to play Grace Kelly. Still the film is set later in her life, and Kidman is a solid choice. Lastly, we have an unfortunate un-casting news and that is Joseph-Gordon Levitt would not be starring in my most-anticipated film of this year, Django Unchained. I mean he is swamped with projects- The Dark Knight Rises, Looper, Lincoln and his directorial debut Don Jon's Addiction which has Scarlett Johannson and Julianne Moore (!). Still, it would have been great to see him in a Tarantino film. Let's hope Kill Bill Vol 3 will fulfill our wishes.

3) So I rewatched all of Pushing Daisies this week. That show was such utter brilliance. Why did they have to end it?! I want them to restart it. I don't care if Lee Pace is in Lincoln and The Hobbit and stuff! Please I need Ned the piemaker back into my life!!

4) Quick question- which shows do you wish were never cancelled?

5) Loads and loads of trailers- Chris Pine is on my mind as two of his upcoming films have released their trailers. First is People Like Us which looks nice and had a good cast. I still refuse to believe that Michelle Pfeiffer is playing Pine's mother. They should be playing lovers. But it's a family film and I'll mostly watch it because of Pine's sparkly eyes. The other is the second-best trailer of this week, Rise of the Guardians, which is made by the Oscar-winning director of The Fantastic Flying Books of Mr. Morris Lessmore, William Joyce. It tells the story of how Santa Clause, Jack Frost, the Toothfairy, the Sandman and the Easter Bunny are the guardians of the children of the world, and they have to save them from the evil Bogeyman. It is a Dreamworks film, very evidently, and has a brilliant voice cast with the likes of Hugh Jackman and Jude Law. Then there is Safety Not Guaranteed which has my role model Aubrey Plaza in it. It looks really fun and quirky and different and I'm really excited about it. What To Expect When You're Expecting looks really awful. I'm not a big baby person. Also why is someone as hot as Rodrigo coming in a stupid dad movie? Take This Waltz has the wonderful Michelle Williams and it looks really sweet. She's like always on a role. The Giant Mechanical Man looks sort of awesome and I can already see me loving it. Also, so glad Topher Grace is still getting roles. There is Total Recall which has Colin Farrell as the big action lead. Speaking of whom, I was rewatching In Bruges day before yesterday and man I'M SO FRIGGIN' EXCITED FOR SEVEN PSYCHOPATHS! Anyways, it seems like a good enough action film though John Cho looks insane. And insane is also the ideal word for the trailer of High School. I kind of like Adrien Brody being crazy like this, but it makes me a tad morose too. So much talent being wasted! Also, the whole film is in the trailer, so big fat fail to the trailer people. The king of the trailers this week is The Dark Knight Rises Lego Trailer. Words cannot explain how awesome it is.

6) Finally, the BEST NEWS EVER of last week was that Anchorman 2 is definitely being made. Yaaayy! Here is some Anchorman math for you-

Milk was a bad option and byee.