In this blog, I usually only write about films that I love. And when I love them, I love them unabashedly and don't care what other people think. But there are also some films that are generally loved by many that I happen to not like at all. I know I wrote 'hate' on the title of this post, but that's just because it sounds cool. Also I feel like being a bit controversial; quoting Todd Ingram, "Sounds like someone wants to get... funky." Well, it is what it is. But still with the exception of maybe a couple, I don't hate any of the following films. I just dislike them.


a) The Pretty Vacant I first heard about this film on Tumblr and god does it have mad fans. After seeing it though, I don't know what they were thinking. I mean yes, it is probably one of the most beautiful-looking films that I have ever seen. I love the many instances of Indian imagery, the ambitious locations and the bright colours as well as some truly wonderful moments of childlike wonder that Tarsem was able to capture on screen. But apart from that, this film is dripping in cheap emotion and the story is so bland and weepy that I cannot possibly love it. In the end it reminded me of a quote from Le Petit Prince, "You are beautiful but you are empty. No one can die for you." This is the exact opposite of The Fall in terms of the look. Dark and gritty and mostly in black and white, it does look stunning. But god everyone in it is so repulsive. I hate the characters and their stories. This film makes me feel icky and gross. So many actors but no one to root for in the least. Now I love Wes Anderson, but his most popular offering is probably my least favourite from among the ones that I have seen. Sure it has quirky characters and his signature look, but apart from Margot Tenenbaum (who I absolutely worship) and the colours in the film, I could not bring myself to care about anything in it. I actually fell asleep mid-way the first time I saw it. First of all, I am not a Westerns person. Never have been, and after seeing this much-acclaimed and apparently the more-talkative hit of the genre, I don't think I ever will be (gulp!). Again this film did nothing for me. As much as I love Paul Newman's pretty blues, I just couldn't care about anyone in this film. Okay agreed that the train blowing up part and the iconic last scene are quite awesome, but apart from that I couldn't find anything really impressive about this film. I saw this fairly recently and my expectations for it were sky-high. Unfortunately, it did not deliver according to them. I think I generally take a long time to actually get to watching a war film as the genre makes me uncomfortable, but once there, I really admire the film. But in the case of this "modern classic", apart from maybe the relevance of the location and a ballsy directorial effort, I didn't care much for it. Okay great, war is a drug for some people. So what?

c) Put the Blame on Mame Now this film and the next are not liked by me mostly because of my own misgivings. I was dying to see this film when it came out but couldn't for whatever reason. The people who did see it just raved about it forever, and increased my already gargantuan expectations for this film. When one night it finally came on the telly, I sat down to watch it with a lot of eagerness. But then I felt as though it went on and on (probably because of the commercials), and I got more and more annoyed with it. I was sleepy and irritated and I didn't like the characters of Christian Bale and Hugh Jackman, two actors I usually love. So by the end of it, it became one of my worst movie experiences ever. I think I will eventually give this a chance and maybe start to like, or even love it. But until then, oh pain! If you know me at all, you know of my bordering-on-disturbing love for the endlessly sexy and talented Ryan Gosling. And he delivers one of his best performances in this film, so you can understand how much I wanted to like it. But call it inexperience or naivety or stupidity, Blue Valentine is a film that I could not connect with. Everyone who loves this film does so because of the emotional impact it had on them. Since I couldn't really relate to it, it ended up being a really fruitless experience for me, in spite of that incredible "You Always Hurt The One You Love" scene. It is almost too raw for me. Hopefully in a few years I can love it like others do.

d) All's not well that ends not well 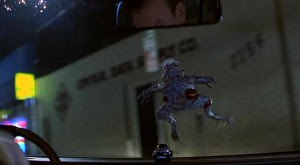 Those fucking frogs. *SPOILER ALERT*
I mean I was really into the movie and its mixed bag of unique, lonely characters. And then it starts to rain fucking frogs! Up until then I had associated frogs with science projects and princes. But now- run in the opposite direction!! I mean just look at that picture- eugh. I know it had a Biblical context and that I should look past these things when watching a film and try to look objectively at the whole thing, but goddamnit, I am stubborn and easily-freaked-out wimp-of-a-girl and I will always hate that scene and the movie as a result of it. (Loss of followers commencing). I am really sorry, but I do not like this film. There are two reasons for that. One is that the character of Anton Chigurh grips me with paralyzing fear. Like if he, the fucking frogs and maybe a few rabid dogs were put in a movie together and I was made to watch that, I would never make out alive. The other reason is that I don't care about everything else in it. I just do not get why people love it so much. If the answer is the Coen brothers, well, you lost me there too (more followers gone). I'm not a fan of their's, and between the crippling horror and the total indifference, I don't like this film at all. Sue me. 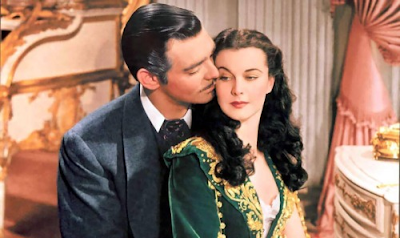 This one I hate the most out of all of these. I find it painful to sit through. So much unnecessary drama! I must say that I love Vivien Leigh and Clark Gable in it, as well as the look and the costumes, but the story and all the other characters and everything else is annoying. And after 3+ hours of seeing Scarlett marry losers and pining after the hugest loser of all, Ashley Wilkes, with interludes of everyone else just dropping like flies around them, it doesn't end! Oh how that ending infuriates me! Not to mention that Scarlett is probably the biggest idiot in all of cinematic history. Also the most loathsome Melanie and all her self-righteousness that makes me think of the puke-inducing Indian soap operas. God bless Rhett for being the only sane character there and the almost-saving grace of the story. I write almost because frankly my dears, nothing can really save this film in my eyes. Blame it on Scarlett's "massive" 21-inch waist.

If I have any followers left after this, thank you for sticking with me. Just remember it's one woman's opinion and just how I won't start liking these films no matter what you say, you won't start hating them no matter what I say.
I hope you enjoyed it. Somewhat. I'll be waiting for the burning torches and stuff.