So last year I made quite an extensive list of films releasing in 2011, and I was a bit off in my predictions. I will make a similar list this time round- of films I will watch, and then of my most anticipated films of 2012. 10) The Woman in Black
Daniel Radcliffe's first film role after Harry Potter (no HP film this year, or ever again *my creys*). The trailers have been fantastic, and it has the potential of being a really good scary movie. I hope it delivers. 9) Prometheus
After seeing Alien and Aliens recently, I am seriously hooked on to this series. Plus super-sexy cast with Fassy as an android. 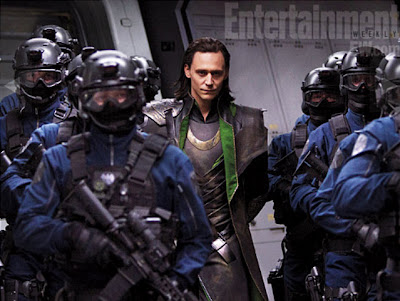 8) The Avengers
The trailer looked like fun, and this will be the real clash of the titans as too many superheroes may spoil the broth. Love Loki though! 7) The Gangster Squad
The picture alone guarantees a spot here. But it does have a stellar cast and everyone is getting serious L.A. Confidential vibes from it. Oooh. 6) Gravity
Alfonso Cuarón's next is about two scientists played by Oscar-winners Sandra Bullock and George Clooney who are stuck in space together, and promises to be absolutely mindblowing with things we have never seen on the silver screen before *drool*. 4) Brave
I am in love with Princess Merida, and my devotion to Pixar is absolute. They will make a comeback with this, I am certain. 3) The Dark Knight Rises
Uh duh. I mean The Dark Knight has to be one of the best films ever made, and Christopher Nolan is a certified genius, and the trailer of this looks fantastic. Also Catwoman :D

2) The Hobbit: An Unexpected Journey
Oh look it's my husband there with Gollum! I am so excited for this. LoTR is one of the greatest trilogies ever made, if not the greatest, and The Hobbit is certainly on the right track with that amazing trailer. 1) Django Unchained
The wonderful and violent genius returns with a Western. After what he did with Inglorious Basterds, I can't even fathom (not that I can ever fathom anything in any of his movies) what sort of pure brilliance is going to be shown here. Plus, Leo as a villain seems too delicious a role to miss. Absolutely dying to see this.

* I completely forgot about Nero Fiddled (formerly known as Bop Decameron) which is Woody's next and stars Jesse Eisenberg, who was born to act in a Woody Allen film.
** Also the Untitled Terence Malick project... though Ben Affleck makes me want to puke.
*** Martin McDonagh's Seven Psychopaths, because we love In Bruges, don't we?
**** P.T. Anderson's The Master, as anything following up to There Will Be Blood has to be a cinematic event.
***** The next Refn-Gosling venture- Only God Forgives.


It will be a great year, ouie?