Mini Reviews- The Art of Getting By, La Belle Personne, Submarine, Like Crazy

"Young love" is the theme of this mini reviews post. Different views on it, but all are essentially romantic films based on the young and the impressionable. There are a few spoilers, but I think one can live with them. Basic Plot- George is a high school senior who is disillusioned with life and death and has figured that in the grand scheme of things, homework just does not fit. All his teachers and his principal are tired of trying to make him mend his ways. In all this he befriends the beautiful and popular Sally, and his life starts to change.

No, I could have not written a more generic synopsis. That is because this film was really that unoriginal. I was originally on-board with the homework idea. Seriously, it is true- if we are all going to die alone in the end, why bother doing homework? This question has been asked by students for centuries. I say Kill Homework! Woo-hoo!! I was slightly cynical towards the film, I admit. But seriously, if someone tells you today that "Since the dawn of recorded history, something like 110 billion human beings have been born into this world. And not a single one of them made it," will you not ask them "What about Edward Cullen?" (Breaking Dawn and head-board breaking non-sex FTW!) Then there is Freddie Highmore. His expressions, or lack thereof, killed me. First of all, his face still looks like that of a ten year-old, or rather like Charlie Bucket. Second of all, he was just not believable. Mopey teenagers are played by most actors, especially child actors who want to break out into "more serious roles". Yes they are aloof, but there is a stubbornness to that, or a sadness, or something; see Kieran Culkin in Igby Goes Down, see Anthony Michael Hall in The Breakfast Club, heck see Joel Courtney in Super 8 who wasn't mopey but so real. Highmore was just bland and stupid-looking. I thought Emma Roberts was pretty good. They make a cute couple, no doubt about that, but it was all so obvious and clichéd, that I was quite irritated by it all. Also, Alicia Silverstone played like a catlady. As if!

The film in general looked quite beautiful and gave us a quite calm and serene looking New York instead of all the glamour and glitz. I thought that if Sally had gone in the end, the way their relationship would have ended in a more ambiguous and slightly novel way would have made me like it more, but yeah, they didn't do that. I also wish that George would have stayed stubborn and not done any of his homework ever, but then I realised that this is a film in the end, and we must give out good messages *snort*. I suppose it is a good date movie. Basic Plot- Based on the seventeenth-century French novel La Princesse de Clèves, the film follows the beautiful Junie as she moves to a new school after the death of her mother. At once everyone wants to be friends with the pretty and mysterious girl, but she chooses cute and sincere Otto amongst them and they promise themselves to each other. But then the handsome Italian teacher Nemours comes into her life, and they both instantly fall for each other, but Junie cannot be unfaithful to Otto.


Ugh, the French and their beauty! Everyone is so beautiful and delicate in this film. None more than the leads Léa Seydoux and Louis Garrel themselves, who play Junie and Nemours respectively. I thought this film was like a dream.  Everyone loved one another. Ofcourse there was the pretentiousness of being a teenager, but more than anything, it was all the maddening desires that hormones bring along with them. It was a very good modern adaptation of an old story about duty versus love. The dialogue was lovely and poignant, as was the use of the music. There is a scene where the enticing Seydoux just sits and listens to a sad French love song, and her face is just so emotive- god learn something Highmore! Garrel, who is only two years older than Seydoux, has been a favourite of mine since Bernardo Bertolucci's The Dreamers. He has that Romantic lead look down to the bone, but I could not easily accept his position as a teacher who constantly is after young female students and no one cares. It's probably because of my background, as both my parents are teachers, but yes, that did bring out some of my reservations. I also felt the film was a bit dull, and I didn't like the twists so much while watching, but they've grown on me. Especially Otto's twist, which I was horrified by at the time, became touching when Junie later remarks "Otto is the only man who'll love me all his life."


All the actors, especially those who played the teenagers, were very good and they were all honest portrayals. I am so in love with Seydoux, just like everyone else. I know it is a given to compare any and every French actress to the sublime Anna Karina, but I think Seydoux really is like her in the sad, bewitching way. Garrel too was very good, almost cute in his love-sickness and I adored Grégoire Leprince-Ringuet as Otto. I think this film will be an excellent double feature with Amelie, as it is almost exactly its opposite, but really is quite well-made. 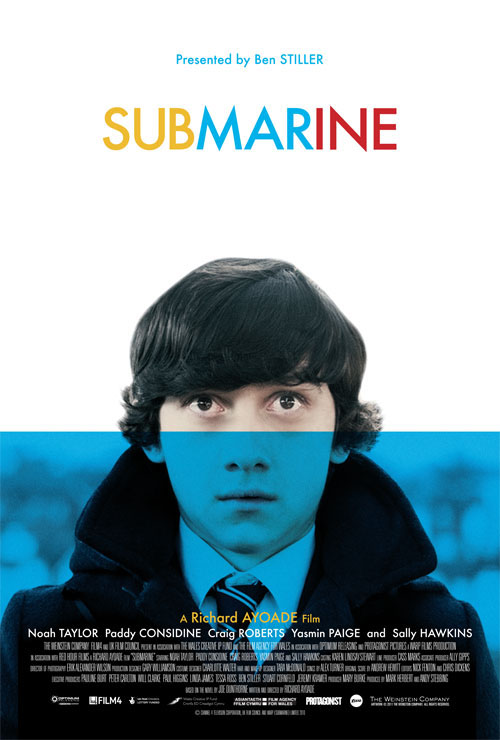 Basic Plot- I am tempted to write that this is the film The Art of Getting By tried so hard to be. Oh wait, I just did! It follows Oliver Tate, a teenager living in Wales during the 80s, who is a loner and thinks very highly of himself. He starts going out with slightly outrageous Jordana Bevan, but in the middle of all their romance, starts suspecting that his mother is having an affair with his neighbour, a new-Age guru, Graham. He is also worried about what this would do to his already boring, and evidently prone-to-depression father. Oliver must save the day now, but things don't exactly go as per his plans.

I loved this film! Ayoade has made a sweet little gem of a coming-of-age film adapted from a novel of the same name by Joe Dunthorne. Let's start with the beginning in which Oliver imagines the kind of sorrow that would waft over his family, classmates and essentially everywhere if he dies. Then when he thinks about what it would be like if a film-crew follows him around all the time, seeing him do and say clever stuff. Also  the way the beginning of his relationship with Jordana plays in his mind like Super 8 film. OH MY GOD- words cannot explain how much I relate to all of this. We teenagers are a self-important lot, aren't we? Despite all of this, the film never really takes itself that seriously to show us crucial life-lessons that can be learnt through Oliver's chronicles in understanding himself and the world. It's just a fun film about a boy who is a bit different.

I thought it was really funny. Not in a HA-HA way, but the kind that leaves you giggling throughout. Craig Roberts as Oliver is so hilarious and kooky, yes that is exactly the word for him, and genuine. He did remind me of Bud Cort from Harold and Maude a great deal... he has the same slightly morbid expression on his face all the time. His narration was very good, and real. I loved Yasmin Paige as Jordana too. She was really the yin to his yang, or rather the red overcoat to his blue. One of the main reason the film worked so well was because how endearing and charming the leads were, together and separate. The supporting cast too was brilliance, with Sally Hawkins, Noah Taylor and Paddy Considine, especially Taylor with his "wild" stories. Another thing I adored about the film was the soundtrack by Alex Turner. It was perfect, and I am quite addicted to it. The backdrops and views used in the film were just gorgeous, being set in the beautiful scenic city of Swansea. The whole look of the film, which cleverly dodged all the digital camera stuff, made this story so much more warmer and happier. A great directorial debut by Ayoade! Basic Plot- When Anna and Jacob meet in college in L.A., it looks as though they have met their soulmates. But due to a reckless overstay in order to be together, their perfect romance gets riddled with immigration problems. A look at modern cross-border relationship between two young and idealistic lovers.

This is slightly grown-up as compared to the other films, and well, me. Quite honestly, I think it should be used as a propaganda film for arranged marriages. It was just so sad. I really wanted to like this, but I could not relate to it at all. I know relatability isn't, and shouldn't be a factor in liking films. But I could not wait for it to get over because it just seemed to drag on. I suppose I find it easier to like the more whimsical things than the real "real" stuff. For example, Jacob builds her a chair. What? I am sorry but I do not find that romantic at all. It wasn't even a funny-looking chair, or a comfy one, or a throne. It was a wooden chair with "Like Crazy" written on it, and not in a *insert Jeff Spicoli's voice* "Dude this wooden chair is totally like crazy," but in a serious way. And he gives her a bracelet with "Patience" engraved on it. He was like a grandpa.

But apart from that both the leads- Anton Yelchin and Felicity Jones are great. They are sincere and sweet and their feelings really transcend the screen. I get how immensely difficult it must be to find one's own footing in the world while being apart from the one person who can give you all love and support you need, and Jones and Yelchin pour their hearts out in portraying this lovely young couple. The supporting cast had Jennifer Lawrence, who is just beautiful, and Alex Kingston AKA River Song from Doctor Who AKA one of my favourite characters of all time, who played Anna's mother. I really felt bad about Lawrence's character Sam. She was such a nobody, along with Simon, played by Charlie Bewley. Even though the film revolved around Jacob and Anna, these characters were just cast away like garbage.

I thought it was directed well and the story was a simple, nice one. It is sort of like this year's Blue Valentine, just much sweeter and less devastating. But the devastating bit is what made Blue Valentine so memorable. Like Crazy does no such thing, and that chair was just annoying. Too real for me, sorry...