Sorry for the delay, folks! I had originally intended to tackle the Apu trilogy later on during the year, but we were made to watch Pather Panchali, the first part of the trilogy, in film studies and so I thought it made sense to watch the other two too. Unfortunately, finding their DVDs with English subtitles was more tricky than I had anticipated. 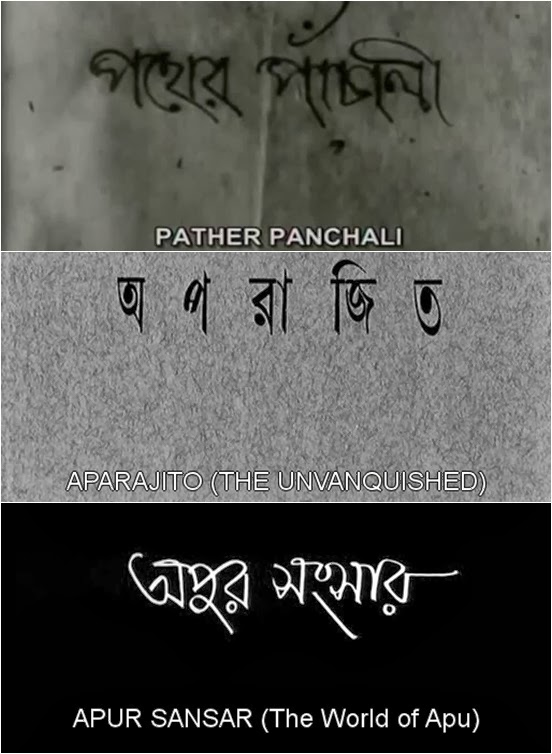 Satyajit Ray's Apu trilogy is considered as one of the milestones in world cinema. A bildungsroman set in pre-Independent India, it follows Apu from his birth to adulthood, chronicling the experiences of him and his family while also capturing the spirit of rural India and the coming of modernity. 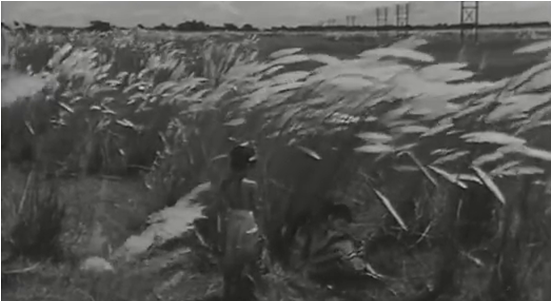 In the first film, we are introduced to Apu and his family- his practical yet emotional mother Sarbajaya, his happy-go-lucky father Harihar, his free-spirited older sister Durga and their elderly relative Indir. They live in their ancestral village, Nischindipur in quite poor conditions, but still try to make most of it. However, something terrible happens and shakes his whole family.

In many ways, this film is least focused on Apu from among the three and is more about showing a way of life. While it is difficult to deny the cultural, historical and ideological importance of Pather Panchali, I will say that I was left a bit underwhelmed. I still liked it a lot, especially the cinematography, but its narrative style did little for me. I won't say that I was bored but the film was a tad too still for me at times and I can see why my father had challenged me to watch this movie without falling asleep (which by the way, I totally won and he now owes me some kind of gift, preferably money hehe). It can be watched as a standalone film though more for the women- Indir, Sarbajaya and Durga, instead of Apu. It's also a pretty accurate portrait of an Indian village and the way that life and death take place there. 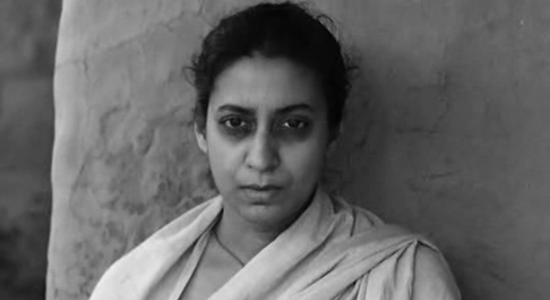 This film follows Apu from his childhood to teens. His family moves to Benaras but tragedy strikes and so they have to live in another village. Apu starts his formal education and it turns out that he is an excellent student and so he gets a scholarship to a college in Calcutta.

This is the only film in the trilogy that I feel cannot be watched on its own. You need the basis of Pather Panchali to care for the characters and Apur Sansar is where this story of Apu finds its catharsis. There are of course very important events that take place in Aparajito- the deaths in the family, and Apu's education and transformation into a modern man.

I think this film solely lies on the talents of Karuna Banerjee, who plays Sarbajaya. She always has a look of sadness, like she wants more from life but at the same time knows how limited her circumstances are. Yet, she remains determined and Apu really owes his life to her in every way. 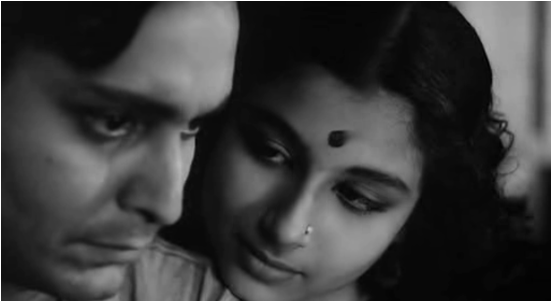 Apur Sansar (The World of Apu)

In the final film of the Apu trilogy, we meet the adult Apu. Apu finds love in this film and then loses it and has to come to terms with his tragic life.

This was my favourite of the three, which isn't a very popular opinion but ah well. Apu has a fully rounded personality in this and his marriage with Aparna, played by the sublime Sharmila Tagore, is just lovely. While this film can be watched on its own, I think the poignancy of it is enhanced when seen in relation to the rest of Apu's life. I happen to like romantic relationships in movies and this film has that kind of a narrative, and so it becomes obvious why I would like it best.

Also, I suppose I have a fondness towards movies set in my city. It's not a particularly stunning city, but it is full of life and I appreciated that this film was the liveliest of the lot too. 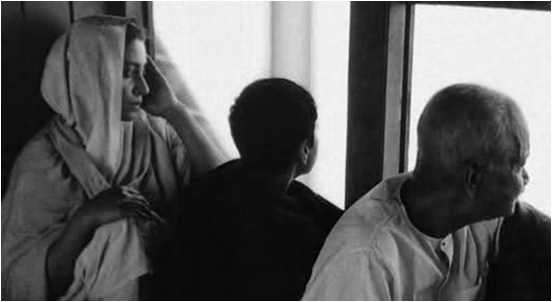 The trilogy is based on two books by the writer Bibhutibushan Bandopadhyay which were somewhat autobiographical. I haven't read them but according to my professor, they show how the coming of modernity in India was a sudden, forced action and for it to stay, the older traditions had to be done away with. They apparently have a more romanticized notion of the modern man, but Satyajit Ray made the movies almost twenty-five years later, during which the Kokata riots had taken place and India had gained independence from the British. Therefore, it is not a direct adaptation as Ray is also critiquing this modernity through the figure of Apu, who loses everything in his life to become a modern man.

There is much tragedy in the life of Apu as we see it, but the handling of the material makes is quite realistic because of how subtly the films move. Ray was was trying to change the idea of cinema from the melodramatic, theatrical features that flocked the screens at the time to something with a distinct language and an aim to capture real life. He was greatly influenced by the Italian neorealists and it is very easy to see elements of The Bicycle Thief in this movie. While I am sure that in the era when it was made, the Apu trilogy was a great departure from the other mainstream movies but seeing them now, they still feel a bit too overly dramatic at times, mostly because of the score though that might be a personal opinion. 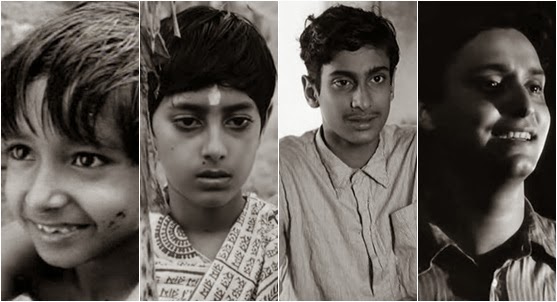 Apu was played by four different actors- Subir Banerjee as the youngest Apu, Pinaki Sen Gupta as the slightly older Apu, Smaran Ghosal as teenage Apu and Soumitra Chatterjee as the adult Apu. All of them were good but I will have to say my favourite was Chaterjee, who is considered as one of Bengali cinema's greats. Until Apur Sansar, we never really get a sense of who Apu is because we always see him with his other relatives. It is once he starts getting educated that we understand his character and in Apur Sansar, it is all about him, his thoughts, his poetry and his love. This Apu is also the one death affects the most and we feel more easily for him. 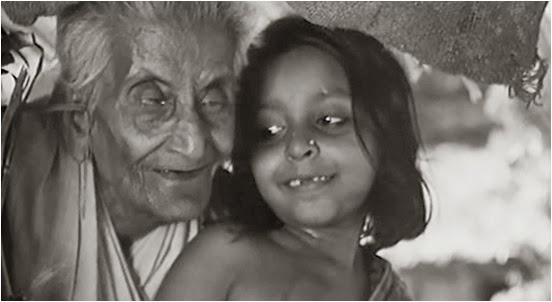 One aspect of the movies I really admired was the role of women in Apu's life. As I said, his father Harihar, played by Kanu Banerjee, is someone pretty bland and complacent and if it was not for the patriarchal structure of the world this is set in, is quite unnecessary altogether. Coming to the women, as I wrote above, Sarbajaya is the driving force behind most of Apu's life. She too is bound in her role as decided by the society, but it is her want for her better life that Apu inherits. His sister Durga, played by Runki Banerjee and Uma Dasgupta, is the person young Apu is closest to and they have a deep bond between them. Indir who is absolutely terrifying to look at, was played by Chunibala Devi, and represents many of the thematic ideas of this story. She is closer to Durga than Apu though. Finally, Aparna is Apu's great love and their relationship is very beautifully depicted. Each of them are responsible for the path Apu's life takes and being a story about a modern man, this becomes a very interesting concept. 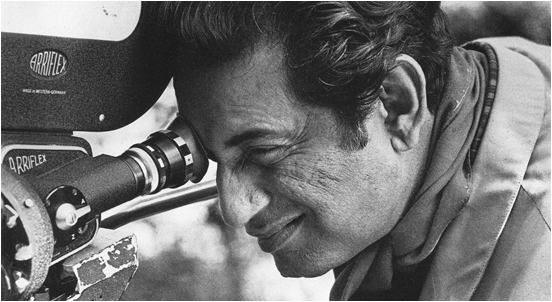 These were the first movies that Ray made, and he worked with a lot of people who had also no experience in filmmaking. The three movies were made on a budget of 150,000 rupees, which is less than $2500 dollars today. These facts are astounding, even moreso when you have watched the movies. There is nothing amateurish about them and they look like something made with a vision. Indeed, Pather Panchali didn't have a script and was made from Ray's drawings and notes. Ray actually lived in a village for some weeks to get a better understanding and one can see how well he emulates the feeling of such a place and the kind of lives people have there. Critics have called it "pure cinema" and due to my still limited film knowledge, I cannot say whether they are right or wrong but I will say that these films are indeed a very beautiful, honest look at a young man's life. And as sad as the story is, I do think that the open-ended conclusion is hopeful and that makes it more touching and life-like. Otherwise, what is the point?

On a final note, I had always been greatly embarrassed by the fact that I hadn't watched any of Ray's movies, being from Calcutta and loving movies and all that. I am really glad that I have fixed that and I am very enthusiastic about watching his other films. 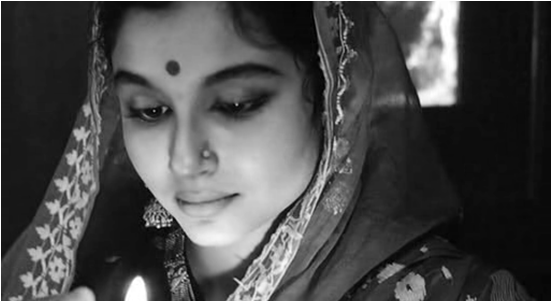