Another late Thoughts post and I have nothing to say for myself except that I have been lazing around in my house ever since my summer vacations began last week. I haven't even started preparing for the exams that will start once the holidays are over. Sorry folks!

1) The Across the Universe Podcast that I have started with Mette and Sofia released its first episode and the feedback has been excellent so far. We are also on iTunes now where you can subscribe to the podcast and download and listen to the episodes, which are all free.


2) Andrew Garfield and Ken Watanabe will starring in Martin Scorsese's next, Silence. The film will follow Garfield's character, a 17th century priest who goes to Japan to find his mentor, but is instead faced with religious persecution. Watanabe will play his interpreter. Scorsese has been working on its script since 1988 when he read the novel of the same name by late Japanese author Shusako Endo, but has had trouble filming it due to its sensitive nature. I think this sounds excellent and so does the cast.

3) Charlie Kaufman is set to co-direct a stop-motion animated film Anomalisa which is, as its Kickstarter page reads "about a man crippled by the mundanity of his life". It will follow a character named Michael who is a celebrated motivational speaker who has, so as to speak, lost the motivation in his life, but all that changes when he meets a girl called Lisa. Sounds quite Kaufman-ish, and hence awesome. Voice cast so far includes David Thewlis and Jennifer Jason Leigh. Cannot wait.

4) Scarlett Johansson is going to direct her first film. Summer Crossing is based on the lost first novel of Truman Capote. It's a film that has been close to her for a long time now and it will be out in 2015. The story follows a 17 year old girl who falls in love with a Jewish parking attendant in 1945 New York.

5) Speaking of directorial debuts, my favourite one is well into its shooting now. How to Catch a Monster better be good, especially seeing how Matt Smith has shaved off his gorgeous, gorgeous hair for it. It is an interesting look overall though, and it doesn't hurt that he's shirtless throughout most of it. He is playing the antagonist Bully in the movie, and after the last Doctor Who episode "Nightmare in Silver" where he got to be a villain and was extremely effective at it, I cannot wait to see what he does.

6) Cannes Film Festival is also in full swing now. I did not know that Vidya Balan is in the jury. She is easily the best working Indian actress right now and I couldn't be happier. Plus I love her outfits. She and Christoph Waltz need to come in a film together. Also movie-wise, Asghar Farhadi's The Past is getting rave reviews so far, which is great because his A Separation is one of the most flawless films I have ever seen.

7) Jesse Eisenberg, Isabelle Huppert and Gabriel Byrne are going to star in Joachim Trier's Louder than Bombs. I have seen one film by Trier and it was Oslo, August 31st, which was a very well-made and affecting film, so I have high hopes for this. The official synopsis says that it is a Rashomon-style drama that "revolves around the character of a famous, late war photographer played by Huppert. On the eve of a retrospective of work, some three years after her untimely death, her husband and two sons discover an unsettling secret from her past." It sounds intriguing to say the least.

8) Johnny Depp, Meryl Streep and the ADORABLE James Corden are slated to star in Rob Marshall's adaptation of the musical Into the Woods. Joining them is the lovely Emily Blunt and also, scruffy gods Chris Pine and Jake Gyllenhaal are said to appear as princes. The last two are small parts but it feels like Hollywood is hacking my brain because good lord, aren't they like princes already? I am getting excited about this.

9) Reese Witherspoon is going to join her Walk the Line co-star, the great-faced Joaquin Phoenix in Paul Thomas Anderson's Inherent Vice. I really need to watch Walk the Line, but I guess this is a good choice. I have faith in PTA.

10) Nymphomiac is going to be some film. The first cast photo has been released and everyone's doing weird shit in it, as one would expect from a Lars von Trier movie. He is in the photo too with duct tape over his mouth. Read the text he sent to Nicolas Winding Refn. Read the entire interview while you're at it. It's hilarious.

11) Btw, the Doctor Who series finale is today and I am going CRAY CRAYYYYYYYYYY!!!

12) LOADS of trailers- August Osage County which looks fairly typical but I do like the idea of seeing Meryl Streep and Julia Roberts as a bickering mother-daughter pair. Also, what is up with Benedict Cumberbatch's hair? The Butler has that annoying uplifting music playing throughout which really distracts me from the trailer. Although that can be a blessing in disguise because who really wants to see John Cusack playing Nixon... sober? Still, I kind of want to watch it for Oprah. Pacific Rim has another fucking awesome trailer out. Jean-Pierre Jeunet has a delightful new movie out called The Young and Prodigious Spivet which has a lot of his characteristic elements in it. Jim Jarmusch's vampire flick Only Lovers Left Alive has two clips out (both of which are in that video). I think it looks amazing and Hiddles and Tilda Swinton have insane chemistry together. Richard Curtis is back with another awesome-looking romcom About Time which has time travel in it so huzzah! It stars Domnhall Gleeson, who looks adorbs in it, and Rachel McAdams and Curtis-regular Bill Nighy. I already wrote a whole post on the trailer of my most anticipated film of 2013, The World's End. Finally, the king of trailers this week is the one and only Gravity. It looks mindblowingly spectacular and I really hope they don't release anymore trailers because this is perfect. I want this film. Give it to me!!

13) Finally, my ultimate girl-crush Emma Watson is wowing everyone at Cannes. Her W Magazine shoot, entitled "The Prime of Miss Emma Watson" is stunning- 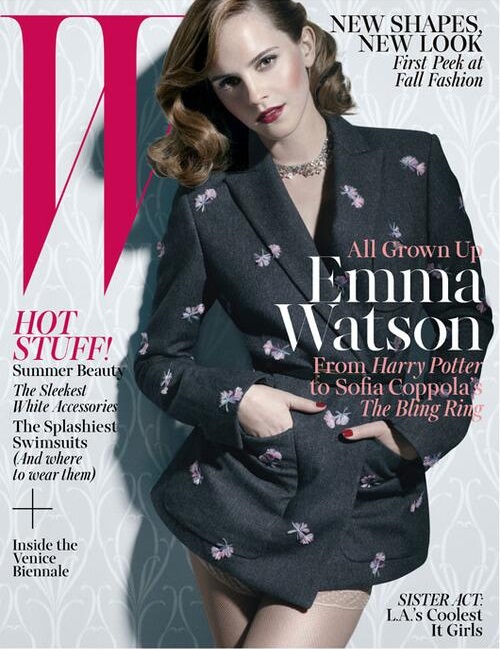 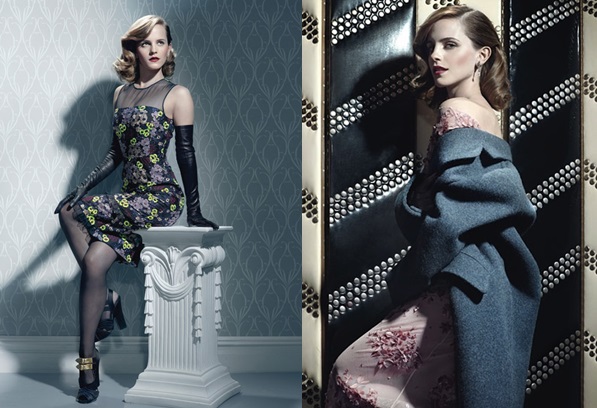