Once again, series 7 part 2 has failed to reach the expectations set upon it. However, it might have been unfair on my part to expect that "Nightmare in Silver", penned by celebrated sci-fi fantasy writer Neil Gaiman, could be as amazing as his perfect "The Doctor's Wife" from series 6. For one, it was a very different story. While "The Doctor's Wife" was about the oldest friend and companion of the Doctor, his "Sexy" TARDIS, "Nightmare in Silver" is about one of his oldest foes, and one that I find exceptionally boring and unimpressive, the Cybermen. Still, there were missed opportunities that were almost made up for by a most jaw-droppingly spectacular performance by Matt Smith. Almost. 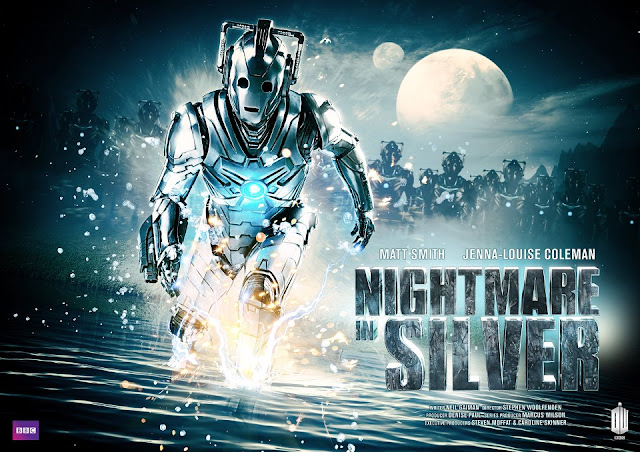 1) The episode follows the end of the previous episode "The Crimson Horror" when the two kids Clara babysits, Angie and Artie, have discovered that she is a time traveler and they blackmail her to take them on one of her adventures. So where do they go? The biggest amusement park in the universe of course- Hedgewick World. He even has a golden ticket.

2) I will like to say from the get-go that the children were unnecessary and annoying, and I properly wanted Angie to die. SO FUCKING PISSING OFF!!
3) So the place has been closed ever since the war with Cybermen. It is under the surveillance of military troops. The Doctor uses his trusty psychic paper to get them off their back .

4) They meet the owner, Webley, who takes them on a tour where they encounter "the 699th wonder of the universe" a Cyberman. 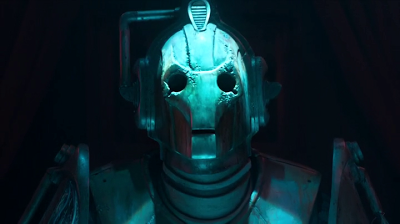 5)The Doctor obviously gets scared but Webley tells him that the Cyberman is deactivated and is only for playing chess a la the Hungarian chess-playing machine, the Turk. It defeats Artie and when The Doctor pokes around, he finds out that it is operated by a dwarf named Porrindge.
6) Porridge was played by the excellent Warwick Davis who was another saving grace of this episode .
7) After the kids have a go at the anti-gravitational Spacey Zoomer and Clara thinks that they should leave, the Doctor refuses because he has seen some funny insects.
8) These funny insects are in fact Cybermites who are awakening the Turk-Cyberman and the two other deactivated Cybermen. The Turk-Cyberman even attacks Webley.
9) In the meantime, Angie, being the annoyong teenager that she is, has wandered off, in spite of the Doctor telling them not to (not everyone is Clara and Brian, Doctor) and gone to the troops leaving Artie alone who gets kidnapped by a Cyberman.
10) When The Doctor, Clara and Porridge go to the troops to get Angie, another Cyberman attacks and using super-speed kidnaps Angie. These effects were v. cool.

11) So the Doctor puts Clara in charge of the troops and tells her to make sure that no one blows up the planet while he goes and rescues the children.

12) I really liked Clara as the captain. She finally got to be spunky like how Oswin was. As all communication with the rest of the Empire is cut off, Clara relocates the troops to Natty Longshoe's Comical Castle.
13) The Doctor finds a Cybermite, and after telling it that it is beautiful, he uses it to transport himself to wherever the Cybermites are getting their signals from. Here he finds that the minds of the children and Webley have been incorporated in the Cyberiad, a sort of psychic network between the Cybermen and while the former are just on stand-by mode, the latter is well on his way to become a Cyberman. He informs the Doctor that the Cybermen that were wounded in the battle have been coalescing in that place and the tourists that go missing are used as spare parts for them. They needed children's minds to further upgrade themselves because of their imagination, but they had stopped coming after the amusement park was closed. He hails the Doctor as the saviour of the Cybermen and then tells him that they don't even need children even more as the Cybermites have been scanning the Doctor's brain that is exponentially more advanced. The Doctor reminds them that he is useless to them as he isn't human, but Webley-Cyberman informs him that they accept any living matter now and then throws the Cybermites on the Doctor who then incorporate him into the Cyberaid too. Well, nearly.
14) The thing is, the Doctor is too smart and too strong for the Cyberplanner in his head and still controls a large portion of it. Matt Smith here is fantastic. His right side is shown as the part controlled by the Doctor and the left by the Cyberplanner, or as he calls himself, Mr. Clever. The way Smith jerks around going from side-to-side or personality-to-personality, subtly changing his mannerisms, his voice, his expressions- it just goes to show why he indeed is one of the best actors to play the Doctor. His flaily movements and twirling have never been more effective than here. As I read in a review, no one can possibly be a better nemesis for Eleven than darker Eleven himself. It was just incredible watching him in this episode. I must add here that this episode has made me even more excited for his movie How to Catch a Monster, aka my most anticipated film of all time, as he is playing the antagonist in it and my god, he will be just beautiful.

15) Also, there are conversations between the Doctor and Mr. Clever inside the Doctor's mind and it is absolutely stunning. I loved the Gallifreyan versus Cyber-tech look. Plus the part when all the Doctors are shown.

16) Mr. Clever and the Doctor decide to play a game of chess to take control of the 0.238% of the his brain that isn't under any of them, and whoever wins it, will get to control the whole brain. Also, if the Doctor wins, the children are to be freed and the Cybermen should leave without killing anyone, and if Mr. Clever wins, he gets access to all of the Doctor's memories, including information on time travel.

17) A Cyberman attacks one of the soldiers in the troop. When Clara asks the erstwhile captain what their strategy against the Cybermen was, she answers it was blowing up the planet, a command that only she can give. Still, Clara takes the detonation device from her.
18) As Mr. Clever and the Doctor play their chess game, the Doctor uses his knowledge of how Cybermen operating systems could be disrupted using gold, the one in his golden ticket, and takes control of his brain for a while.
19) The ex-Captain wants to follow her duty by activating the bomb, but a Cyberman kills her. So Clara and the rest of the troop decide to fight the Cybermen, and Clara kills one in an extremely cool manner by the only anti-Cyber gun they have. 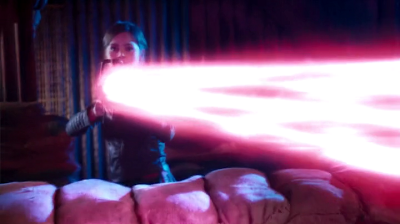 20) The Doctor comes to the castle with the children, informing Clara of their situation. He's super funny here. He tells her to tie him up, hands free for chess of course, and continues the game.

21) When he removes the golden ticket, Mr. Clever comes back and starts taunting Clara and tells her that she is the impossible girl. Even though Clara is so far too much of an enigma and hence slightly bland, I still adore all her conversations with Eleven. Her reaction to both Mr. Clever and the Doctor here is very entertaining to watch.

22) Oh when Eleven says "Fantastic" and "Allonsy". All the joys!

23) Clara decides to electrify the moat around the castle, and then Mr. Clever who is pretending to be the Doctor, calls her and tries to wean information out of her. She sees through him, but he still manages to get hold of the detonator and breaks it and then, in an almost spine-chilling moment, informs her that all the Cybermen are ready and coming. And there really are loads.

24) I'll stop here. The chess game is won in three moves, a lot of Cybermen attack, we meet the Emperor, and there is even a marriage proposal.

This episode was created to make the Cybermen scary again. I have never found them scary except perhaps in "Closing Time" when the absolutely adorable Craig is being made into one. But even then, it was probably because I couldn't imagine someone so full of life to become so dull. I guess Gaiman did manage to give the Cybermen a slight edge. I did like the super-speed and how one of the Cyberman takes off his head to fool the soldiers, but nothing more. The Cybermites were pretty creepy though and I did love the way both Webley and the Doctor looked with the Cyber-tech on their face.

I felt that the whole concept of Cybermen lose in an amusement park was completely wasted. The park wasn't exploited as a setting at all. Even the comical castle had nothing comical about it. Then there were the children who could have easily been scrapped. Clara did not really seem to care all that much about them, but in her defense, she does have an astonishing amount of faith in the Doctor. Angie was annoying as hell and I literally groaned everytime she spoke. The soldiers were kind of boring. Only Davis as Porridge was interesting and endearing. 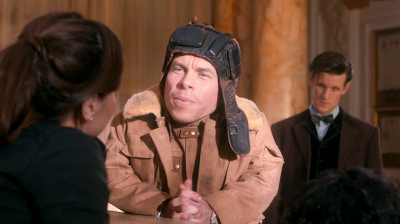 The look, as it has been this entire series, was pretty spot on, even with the limited settings. And then of course, there was Matt Smith. I know that no one would even consider Doctor Who for a serious award, but if that ever happened, this is the episode which could get him a lot of accolades. He was simply that incredible in it. Also, smart move making an entire episode on Smith's profiles, which are gorgeous.

Next episode is the series finale, when we finally find out about who Clara is and how she will save the Doctor when he goes to Trenzalore and his greatest secret is revealed. "The Name of the Doctor" better be good and not continue this series trend of not reaching expectations. It has already been leaked and I am in super-paranoid mode trying to avoid any and all spoilers. The only preview I have read has been v.v.v. positive, and I am cautiously hopeful that it will rock. Also, the Doctor will cry which will kill me. Plus, River Song returns. And then there are the Whispermen which look terrifying.

AAA what does this all mean?