In series 7, part 2 so far, Mark Gatiss has emerged as the best writer. His "Cold War" was one of the scariest episodes in a long time, and his second story, "The Crimson Horror" is easily the most entertaining episode in the second half yet. This was especially great because I had almost forgotten about this episode amongst the glitzy titles and plots of the rest, but where they fell behind on reaching expectations, "The Crimson Horror" ends up being a joyride into a Victorian dystopia with Doctor and his gang. 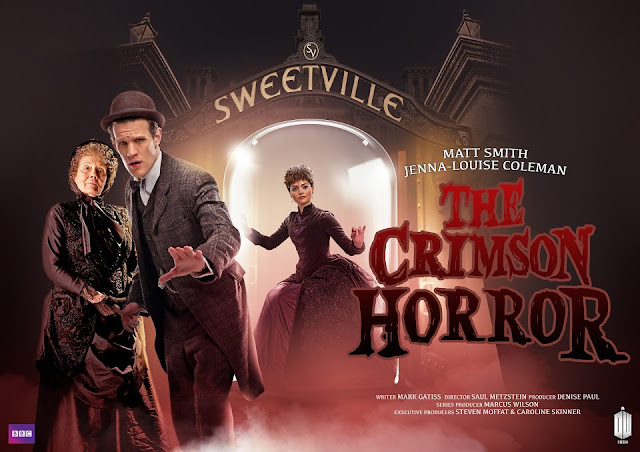 1) Interesting how both the Mark Gatiss episodes this series have had Game of Thrones actors in them. This time it's Dame Diana Rigg who plays the awesomely sassy Queen of Thorns in the latter. In "The Crimson Horror" she is the fanatical villain, Mrs. Gillyflower. 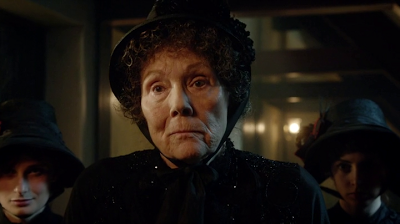 2) So the episode starts with a journalist called Brandon investigating the 'Crimson Horror' in Yorkshire, a plague in which the victims are found with their skin turned red. However, he too falls into this trap, and is found dead in the same condition.
3) His brother, Mr. Thursday, seeks help from our favourite Victorian lizard detective and her chambermaid wife, Madame Vastra and Jenny. Also joining the gang is the adorable nihilistic potato-man, Strax. It turns out that Mr. Thursday's health suffers from well, aliens, as he seems to faint whenever faced with one.
4) Vastra and Jenny see that dead Brandon's eye has somehow managed to capture the image of none other than the Doctor. And so they set off to Yorkshire.
5) Jenny attempts to infiltrate Gillyflower's Sweetville, a community which will save its perfect inhabitants against the coming apocalypse.

6) Here we meet Gillyflower's blind daughter Ada, played by Diana Rigg's own daughter, Rachel Stirling. She gave my favourite performance in this episode and was, as the Doctor will say later on, splendid. Gillyflower uses Ada's blindness to scare people about how doomed they are. I thought that the make-up department did a fantastic job on her. 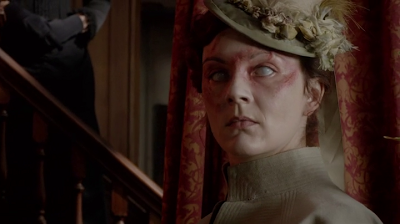 7) So Ada has a secret, a "monster" she has kept locked in a room towards whom she has tender feelings.
8) Back to Jenny, who is picking locks to go deeper into Sweetville, finds out that no actual work is being done in the mill and the noise of the mill actually is made by a number of huge gramophones. I loved this visual. It was v. steampunk. 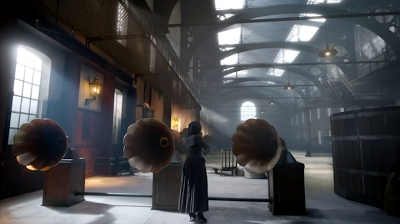 9) Vastra has been doing her own investigating in the meantime and finds out that this "Crimson Horror" is something she had encountered 65 million years ago.
10) Jenny finally finds the Doctor, who was the said monster. To her and well, my horror, he has also been "crimsoned", though it seems to have affected his ability to talk and move, making him mummy-like in a way. Also, red is apparently not Matt Smith's colour. He looked positively frightening. 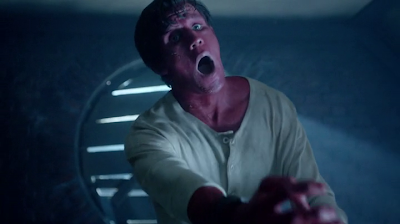 11) They escape and find that all the recruits of Gillyflower get immersed in a vat of some sort of red liquid. This reminded me of Stepford Wives a lot.
12) The Doctor then takes his clothes and his sonic screwdriver with him inside a small closet, and after a few moments, emerges as his awesome man child self again! Also he sweeps Jenny off her feet and kisses her, and she slaps him. THAT'S WHAT YOU GET FOR KISSING A VICTORIAN LESBIAN, DOCTOR!

13) He says that he has to find Clara, much to Jenny's confusion. He then recounts his entire journey so far, which was shown most delightfully in the style of old cinematograph movies. Absolutely loved the direction in this episode.
14) Basically Clara and the Doctor arrive at Yorkshire instead of London, as was intended. For the fans of Classic Who, there were a number of references to the Fifth Doctor and his companion Tegan Jovanka here. The Doctor and Clara decide to stay when they hear a scream and discover this whole case of "Crimson Horror" from Brandon. They pretend to be husband-wife, Doctor and Mrs. Smith, northern accent and all and join Sweetville. When they ask Gillyflower why she hasn't named the place after herself, she replies that it's in the honour of her silent partner, the elusive Mr. Sweet. But then the Doctor and Clara discover that the inhabitants of the place are kept in glass jars like dolls, and before they can do anything, they are captured and immersed in the red liquid. This liquid is a diluted poison that Gillyflower is using to preserve "worthy" people for the coming apocalypse. Clara survives this, but it affects the Doctor negatively as he is an alien. However, he also doesn't die like the other humans, and Ada, upon finding this, thinks he is special and hides him away. It is in his crimsoned state that Brandon finds him before dying and thus the Doctor's impression is preserved in his eyes.

15) Meanwhile, Strax and Vastra are lost. Love it when Strax blames the horse pulling their carriage and threatens to kill him.

16) Jenny is still confused about Clara being alive; remember she met Clara Oswin Oswald, the governess/barmaid who had plunged to her death- and is even more so when she and the Doctor find Clara Oswald in the glass jar. I would like to point out here that for all the fuss about chairs later on in the episode, the Doctor uses one first here to break the jar and rescue Clara.
17) The Doctor starts to fix Clara the same way he got cured when the other, fully-converted inhabitants of Sweetville come, which the Doctor hilariously calls "the attack of the supermodels".
18) He whips out his sonic screwdriver to fight (TWSS) them, but Jenny takes the floor instead, taking off all her boring Victorian clothes to reveal a leather catsuit underneath. The Doctor's reaction here *tsk tsk*.

So the Doctor got a sonic boner...

19) And then Strax and Vastra come too. Strax has another winning line here when he isn't allowed to go on a full-blown attack.

20) Clara comes back to her own self. She's adorable here.

21) Ada discovers that her monster has escaped and when Gillyflower finds this out, she decides to launch her attack immediately. Ada asks her if her if she would include her in the her "heaven" but Gillyflower declines saying that there is no place for people like Ada in it. What. A. Bitch.
22) As Vastra informs the Doctor, the "Crimson Horror" is in fact the poison of a prehistoric red leech that had plagued the Silurians. Clara figures out that the chimneys don't smoke, which means that they must be used for something else.This being a huge rocket that will rain down the poison onto everyone except Gillyflower and her supermodels.
23) The Doctor and Clara go after Gillyflower while Vastra and Jenny attempt to steal the poison vat. The Doctor runs into a weeping Ada, and thanks her for saving him. He asks her about Mr. Sweet, but she still won't betray her horrid mother. I found this accurately Victorian and hence commendable.
24) I will stop here. Now we find out who or what Mr. Sweet is, the confrontation between Ada and her mother from hell, Strax firing a laser, the Doctor still not explaining Clara, and a happy ending essentially.
25) Also, Clara returns to the house of the kids she babysits, she finds out that the two of them, Artie and Angie, have figured out that she's a time-traveler from pictures of her on the internet. Of course, the real question is who was taking pictures in a sunken submarine in "Cold War" or in a haunted house in "Hide", but as Matt Smith so famously once said, "NEVER apply logic to Who." She finds another picture that is actually of Clara Oswin Oswald from Victorian London and not Victorian Yorkshire, thus accidentally admitting that she is in fact a time traveler. The kids then blackmail her to take them in one of her trips.

As I wrote above, Mark Gatiss, who one of the reviewers called the "most Victorian man in England", was made to write this story. His first Doctor Who story was also set in the same era, "The Unquiet Dead" that was about Charles Dickens. "The Crimson Horror" was a better story as he seamlessly mixed the creepy with the mysterious and the fun, with a touch of the poignant in the character of Ada. His writing was brought completely to life by director Saul Mesztein who gave the episode a lot of steampunk touches and that wonderful little old school segment.

Performance-wise, it was all about the mother and daughter. I thought Rigg was an excellent villain, diabolical to her last heartbeat. And then Stirling, who even with whitened eyes, was able to emote so much. Her pain, her anger, her love for the Doctor- it was all very touching. Also I loved the part when she got to call her mother a "perfidious hag" and a "harpy" :P

I call this the "Doctor effect" on (straight) women.

Vastra, Jenny and Strax were as fun as ever and I really liked that Jenny got to do some ass-kicking this week, since she is often overshadowed by the other two. I love the Doctor and Clara's chemistry too much. I just read that they have actually based it on that of Indiana Jones and Marion Ravenwood, which is awesome. Also, Matt Smith needs to do a northern accent more.

I must also talk about the behind-the-scenes video of this episode. It was brilliant! Gah I miss Confidential sooooo much! All the opportunities of seeing Matt Smith act like an idiot lost. Also, Mark Gatiss everyone!

Next week, we have the much-anticipated Neil Gaiman-penned episode "Nightmare in Silver" where the Doctor, Clara, Artie and Angie get ready to face the return of the Cybermen. The reviews have been extremely positive so far, so it seems we have another winner on our hands after the magnificent "The Doctor's Wife." Plus, it has Matt Smith doing a Christopher Eccleston impersonation :O