I don't know how but I have gotten into this terrible habit of posting my weekly thoughts every two weeks. I am late today as well and will probably be next week too as I am going to UAE for my summer hols. I promise to work on being better though.

1) First of all, Something Is Afoot.

2) Old, old news to get off my chest- Lee Pace will be the villain in Guardians of the Galaxy. Even though this means that all of his beauty will probably be burried under tons and tons of make-up, I am really happy that Pace is getting the big break he deserves. He is also in talks to star in the second season of Hannibal, along with fellow-Pushing Daisies stars Kristin Chenowyth and Anna Friel. Him, Mikkelsen and Dancy- yummy! (See what I did there?) Next, people are trying to remake The Crow, which I feel is an excellent idea because the story and the character are very interesting and the 1994 original is almost too cult to do them justice. Among the people whose names have been thrown around for playing the titular character are James McAvoy, Tom Hiddleston (who would have been perfect, imo), and now Alexander Skarsgard is in talks. Speaking of Hiddles, he will be starring in a Robert Capa biopic along with fellow Marvel-actor, Hayley Atwell. Me likey. His Marvel brother Chris Hemsworth is going to star in a new Michael Mann cyberthriller along with Viola Davis. I think this is a very interesting pairing and am excited to see what comes out of it.

3) Jessica Chastain is in talks to star in Christopher Nolan's next big space adventure movie, Interstellar. She will join Matthew McConaughey, Anne Hathaway and Nolan-regular, Michael Caine. Give me this movie NOW!

4) Daniel Radcliffe continues to make bold, cool choices with his post-Potter career. He is going to star in the adaptation of Tokyo Vice which is based on a true story about a reporter whose crime stories and a final scandal get him into trouble with a Yakuza boss. It is going to be directed by music director Anthony Madler, who is making his feature film debut with this. I really like how this sounds. Let's hope it's awesome and DanRad with it.

5) Paul Thomas Anderson is set to start shooting his next film Inherent Vice this month. It will star his The Master-collaborator, the great-faced Joaquin Phoenix (what a face, man!). I am still a bit sad that Robert Downey Jr. won't be in it instead. I think he and PTA would have made quite a pair. Still, cinephiles everywhere are rejoicing of course.

6) Michael Fassbender and Natalie Portman are going to "Bard" it up in Justin Kurzel's adaptation of Macbeth. I wasn't the biggest fan of the Scottish play when we studied it in school, but if anyone can make me change my mind, it is Fassy. I think he will be perfect. And Portman, who so cleverly joined this project after being denied the chance to work with Fassy in the now-annoying-with-its-casting-problems Jane Got A Gun, is a very intriguing choice to play Lady Macbeth, who was probably the only character I liked in the play. Kurzel, whose debut film Snowtown is apparently very violent, is again a most interesting choice as the director. I can see this working v. well.

7) Other casting news- Bradley Cooper is going to star in Steven Spielberg's next American Sniper, which is based on the autobiography of Navy SEAL Chris Kyle. I have become quite the Cooper fan since Silver Linings Playbook and am thus looking forward to this film. My husband, Logan Lerman, has joined Brad Pitt and Shia LaBeouf in David Ayer's World War 2 tank drama Fury. The film is about a five-man American tank squadron who go to Germany to fight off Nazi forces. Lerman, according to the site, will play, "Norman Ellison, an Army typist and the youngest and most inexperienced member of the crew who is thrust into being a tank gunner." Sounds pretty good to me.

8) Only one poster worth talking about really, and that is of Lars Von Trier's potentially v.v.v.v.v.v.v.v.v.v. controversial new film, Nymphomaniac. I think it is brilliant. People have been calling it a Tumblr fan poster, but that's exactly what I love about it. Fan posters often highlight the most important features of the respective film and just drown out all the noise and that is what this poster is doing. This two-part film is about the sexual journey of a woman, played by the underrated Charlotte Gainsbourg, and the poster is implying this in the most simplest of ways. Genius!

9) Trailers- The Bling Ring's official trailer is making me want this film even more than I do, which is A LOT. Also, I am so going to be talking like (well, trying to) Emma Watson for a week after I watch this. Thor: The Dark World looks cool, especially with Game of Thrones director Alan Taylor at its helm. I expect loads of fight scenes. My favourite part of the trailer is Loki, obviously. Violet and Daisy looks very interesting and lovely. Love the duo of Alexis Bledel (Rory Gilmore!) and Saoirse Ronan. Kristen Wiig's follow-up to Bridesmaids, Girl Most Likely looks like a whole lot of fun. I think she and Annette Benning, who plays her mum, are a charismatic and awesome match, and Matt Dillon and even Darren Criss are great. Joss Whedon's Much Ado About Nothing looks so so so so good and I really hope it releases here. I am certain that I will love it. Finally, for trailer of the week, Pacific Rim looks unfuckingbelievably out-of-this-world fantastic! 2500 tons of awesome to be exact. I can't wait to watch this now.

10) Finally, my most anticipated film of all time has started filming- 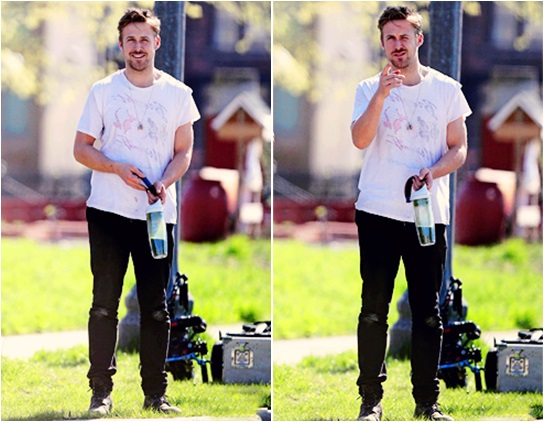 Hottest director ever, anyone?

Also, I am guessing (and hoping and praying) that the picture below is for How to Catch a Monster and not Doctor Who- It *is* a bit of a shock, but I think it is fine, all in all. Hair generally grows back.

However, when this picture got released, this is what happened to Tumblr-

This is coincidentally what is going to happen to my ovaries once the Gos and Matt Smith start filming together. Can't wait.