1) Trailers- So last week I completely forgot to put some of the v. important trailers because I'm stupid. First we have the two identical Man of Steel teasers, except for the voice overs- one has Kevin Costner as Jonathan Kent and the second has Russell Crowe as Jor-El. They are, as many have said, extremely Terrence Malick-esque, with butterflies and whatnot, but I kind of like it- especially the flying bit at the end. Then we have, what might be the most anticipated film of the year for many, many film lovers, P.T. Anderson's The Master. It looks very intriguing and the cinematography is beautiful. Next is Brad pitt-starrer crime flick Killing Them Softly. I like Pitt in this avatar and love the trailer especially towards the end. Kirsten Dunst, Lizzy Caplin and Isla Fisher star in Bachelorette, which is kind of like Bridesmaids (it even has Rebel Wilson), but perhaps meaner and less depressing. I really want to watch this- I love Kiki being a bitch, and gosh her clothes in the trailer! The best trailer of this week is obviously of Skyfall, the next James Bond movie. It looks absolutely badass and gorgeous. Love Judy Dench as M, love Ben Whishaw as Q, love eerie Ralph Fiennes and Javier Bardem, and love love love Daniel Craig and his suits. I am so stoked! Also, I must talk about the Doctor Who series 7 trailer. Though I liked the teaser more, this one is pretty awesome too, with River Song, aka the love of my life, making an appearance, and also all those blown Daleks, which is supremely cool. CANNOT WAIT!


2) Peter Jackson is making The Hobbit into a trilogy. I don't know how I feel about this. I mean, will we even get to hear Benedict Cumberbatch's awe-inspiring voice in the first one? Poor Jackson doesn't ever want to stop making these movies, understandably so. Also, he should definitely take some of Total Film's attempts to name the third film into consideration. My favourite :')


3) Emma Stone will star in the next Cameron Crowe film, Deep Tiki. It has a really weird plot about a disgraced military contractor finding himself when he is sent to some top-secret base in Hawaii. I am only writing about this because in Emma Stone's fantastic acceptance speech for the Trailblazer Award in MTV Awards, she talked about Crowe being one of her role models. And since she is one of my role models, and my fake BFF, I hope this is a great film for her sake.


4) The Olympics have started and no, I am not going to discuss the sports since I hate all sports; this is about the opening ceremony made by Oscar-winning director Danny Boyle. I sort of liked it. I saw all of it, minus whatever was cut during the fucking commercial breaks and between the march of countries that begin with the letters J-P, because I fell asleep then. In my defence, it aired from 1:30 am to 5:30 am here. Here's what I did like- Kenneth Branagh coming out of nowhere, James Bond and the Queen jumping off a helicopter (though I don't know how much I like the idea of both of them um, together... Bond has quite a reputation with the ladies, you know), J.K. Rowling, who is my queen, reading Peter Pan, big bad Voldemort, Rowan Atkinson being awesome, the whole music bit (except that cellphone love business), especially The Sex Pistols playing with the Queen present there, head banging to Arctic Monkeys at 4:30 in the morning, that one hot torch runner, the lighting of Sauron's Eye Olympic torch, the pretty fireworks and just the fact that Paul McCartney was there. There was a lot of weirdness too, the weirdest being the creepy giant baby that obviously was from Boyle's very own Trainspotting.


5) It has to be spoken about- Vertigo has replaced the fifty-year champion of Sight and Sounds "Greatest Films" list, Citizen Kane. Now I haven't seen the latter in the longest time, but I remember being blown away by it. Vertigo, not so much. In the entire top 50 list, I have seen 21 movies, which is decent-ish. From this list itself, another Hitchcock giant, Psycho, would probably top for me, followed by Taxi Driver (or maybe the other way round...), and then In the Mood for Love. The director's list is slightly better, with Taxi Driver at least in its top 10. Also I have seen 8 of the films, so yaay! Also check out the choices of some of the best directors around.


8) Finally, you know what I said about Daniel Craig and his suits- 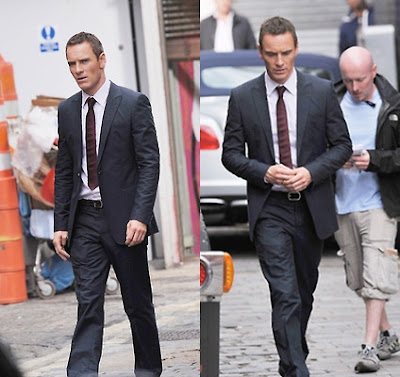