Yes, I didn't write a Thoughts post last week.
1) Reason: I thought I would post my thoughts on Star Wars instead but I really do not like what I've written and I don't know if and when I'll post it.


2) The Oscars are right around the corner. Everyone has their predictions up now. Most of it is really obvious. The categories I am really looking forward to are Best Actor, Best Actress, Best Original Screenplay (they better give it to Woody) and anything with Harry Potter in it because COME ON! ONE OSCAR AT LEAST!!!! I will almost definitely do a thoughts post on this after the ceremony.


3) I have been posting my end-of-year lists for the past few days. I had intended to post one everyday but I couldn't do one yesterday as I finally got a chance to see some of the films I had missed. I think I have seen everything I wanted to see, for these lists at least, except Shame. These are my favourite villains, scenes and shots of 2011. Hang around for favourite performances and films, and The Social Network film of the year.


4) Anyone watches Top Gear? Fassy came! He is too cool with his shark teeth and all. So he has signed on for Ridley Scott's next that will be written by Cormac McCarthy, who is the author of The Road and No Country for Old Men. It is called The Counsellor and is actually being described as "No Country for Old Men on steroids." Now Anton Chigurh still haunts my nightmare, so I don't know if I like the sound of this. But for Fassy's sake, I hope it's not that scary and I will be able to watch it. Fassy is also going to star as a Irish mythological hero Cuchulain in Irish Myths, who is sort of like Achilles. I like this one. Fassy back to his Stelios days (I am an unapologetic fan of 300).


5) It is unfortunate that Fassy is so very booked, otherwise he would have been the *perfect* Beast for Guillermo Del Toro's Beauty and the Beast, which is definitely being made now. The previous news were all rumours it seems. Emma Watson will be Beauty (inspired casting) and after seeing My Week with Marilyn, in which she wasn't totally horrendous as I had expected her to be, I think she'll do alright. If the producers of this film only listen to my pleas and cast Matthew Goode, all will be great. They cannot cast Ron Perlman right? As that will be frightening and make young girls lose faith in fairytales forever.


6) THE film news of the past two weeks is of course that Michael Bay will be returning as the director for Transformers 4, which will be a reboot. Why? I think Michael Bay was made by Skynet so that he can make all the money they need for the future while simultaneously making people loose their brain cells as they watch these films, so that then the real robots can come and take over the world and we will be too senile and bankrupt to protest. AND WE SHALL ALL BURN! Okay yes, I should really cut down on the melodrama, but seriously whyyyyyy??


7) Trailers. Only one trailer this week, but I think it is a pretty awesome one- Abraham Lincoln: Vampire Hunter. I like this idea. I like the trailer even though it looks very OTT at times. I do like the tree-chopping, if you would call it that, in the end and think it's very clever. I am hooked.


8) Oh you must read this. Reading people's lists on why they love films makes me feel really happy and really ignorant at the same time. Gotta watch more films!!


9) Finally, I saw The Woman in Black. My reactions- 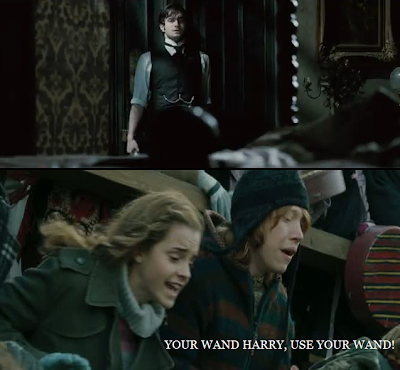