Hi guys! Remember that time when I stopped writing these posts for like 3 months and then promised to never do so again and then did not write them for another month- yeahhhh... sorry about that. I am kind of out of ideas about what to do for this blog. Do you guys have anything that you might want to see me tackle (probably badly but still)? Help, I'm useless.

1) Sofia Coppola is going to direct the live-action adaptation of Hans Christian Andersen's The Little Mermaid (and not the Disney one)! YAAAAAAAAAAYYYYYYY! I literally cannot imagine what this will be like, apart from the gorgeous cinematography *obviously*, and that's kind of awesome. Coppola is such a feminine director and I am really psyched to see what she does with the story. It's based on the original story, i.e., the one with the sad ending and the script is by the writers of 50 Shades of Grey and Shame so that's, er, interesting.

2) So Marvel has apparently lined up movies till 2028. What the fuck?! That's total madness. I'm sorry that I'm an age freak but I'll be 36 then and it's disturbing to think that even though I have no idea where I will be or what I will be doing (hopefully Ryan Gosling- BA DUM TSS) at that point in my life, I *know* that I will be watching Marvel movies then. I can't even imagine what the world will be like in 2028. Just UGH!

3) Pixar is going to make The Incredibles 2 and Cars 3. Even though I was initially pissed off about the former (not even going to address the latter- your mess, Pixar), I heard that Brad Bird is the one making it and then thought about how Pixar DID make the Toy Story trilogy and now I'm on board. Also, even though I forgot to add her, Edna Mode was one of my honourable mentions in Sati's spin-off blogathon because I would love a film just about her. She better return. #nocapes

4) The sequel to Magic Mike is going to be called Magic Mike XXL and I love it. Duh. They haven't finalised the cast yet but going by my recent Google searches, I would like Chris Evans, Sebastian Stan, Ryan Gosling, Matthew Goode, Jack O' Connell, Xavier Samuel, Rodrigo Santoro, Daniel Sharman, Fassy, the twins from Teen Wolf and so on. Anyone would actually do because the first film made me like people like Alex Pettyfer and it was also the beginning of McConaissance for me. Just let there be some good ol' fashioned male stripping and you have my money (in singles. Duh).

5) Almost casting news- David Fincher wants Christian Bale to star in the Steve Jobs movie that Aaron Sorkin wrote. I dig this. Ryan Gosling might be producing and starring in a Busby Berkeley biopic. This is fantastic. I am slightly bored of his silent, conflicted hero roles. If he does this film, he will be dancing and choreographing and stuff. HELLZ YEAH! Also lots of romancing because Berkeley was married 6 times. HELLZZZ YEAHHHH!!! Chiwetel Ejiofor is being considered to play the villain in the upcoming Bond 24. I am completely on board with this.

6) I don't know if I have declared this yet but 2014 is going to be the Year of Jack O'Connell and I'm super excited about that. The news that he will star in Joe Cornish's next feature Section 6 has increased my excitement tenfold. Cornish's previous movie Attack the Block, which was also his first, is one of smartest and most thrilling movies in recent years so this is excellent. The film is a historical spy thriller about the formation of MI6 after WW1 and its first director, Sir John Mansfield Cummings, who was actually the inspiration behind M in the James Bond series. O'Connell will play a young protege of Cummings.

7) John Green recently made the announcement that following the release of the adaption of his latest novel The Fault in Our Stars, the same team behind it will make the film version of another of his novels, Paper Towns. I really love Paper Towns too and I feel it has a more unique premise than TFiOS and so it could be a pretty interesting movie if made properly. Nat Wolff, who played Isaac in the TFiOS movie will be playing the protagonist Q in Paper Towns. I approve of this because he looks like how I imagined Q to be, unlike Ansel Elgort who is playing Gus in TFiOS.

8) I know most of you guys don't listen to Bollywood music but I have a feeling you might appreciate this if you like music in general. Those of you who do, this is kind of pure genius.

All the songs are listed here. I love most of them before the 2010s.

9) Trailers- I'm going to go from best to worst. So my favourite trailer that has come out in the last *sigh* month is Frank. I have seen it like a million times now and it cracks me up every time. I have this really strong feeling it might become my favourite movie of the year and possibly my favourite Fassy performance. Yes, I know his Steve McQueen movies will always have his best performances but the heart wants what it wants and if I know my heart well enough, it wants Fassy wearing a giant head and acting nuts (I should be a lyricist). The latest X-Men: Days of the Future Past is a tad impressive though I still think the film is going to fail, which sucks because it has incredible actors. Lucy pretty much looks batshit crazy and I really think the film isn't going to be good but hot damn, I LOVE SCARJO SO MUCH! She looks amazing and I definitely want to watch this. The True Blood season 7 teaser which is pretty much useless but I am sooooooooooo glad this show is ending. Jupiter Ascending looks like the kind of movie that will inevitably suck but at the same time, there's Eddie Redmayne in it and so I'll have to watch it. I don't particularly like the trailer of Night Moves because it looks pretty meh but I've read that the film is excellent and I do like the cast so I'm interested. Same goes for Begin Again although its USP for me is that it's made by the guy who made Once, which is a perfect film. Sex Tape can't possibly be an entire movie, right? With that thin and stupid a premise? Also, I like chubby Jason Segel and this weight loss makes me sad. And now, we get to the *really* good stuff. Bad Johnson has one of the craziest premises and posters I have EVER heard of/seen in my life. The trailer is relatively tame but just, WOWSERS! Also, this is exactly the kind of movie I expect Cam Gigandet to do. I saw the next trailer before Captain America: The Winter Soldier so just imagine my reaction- Pizza is a horror film about a pizza delivery man which is actually a remake of a South Indian film and it has just blown my mind. And finally, THE worst trailer of the month is that of the Indian movie copied from Sherlock, Samrat & Co.. No. Just no. Stop it, Bollywood!

Side note: I should totally just start a segment called "Stop it, Bollywood"/ "Why, Bollywood? Why?" and just cry over/rant about Bollywood. It just makes me so mad!

10) Finally, this reunion of Matt Smith and Karen Gillan brings me immense joy- 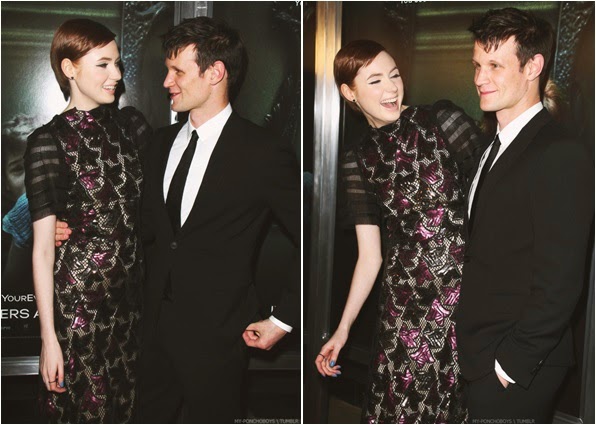 They should just get married. Well, the only people Matt Smith is allowed to marry, in order of preference, is me, Karen Gillan, Ian McKellen and Jennifer Lawrence. Since he hasn't found me yet, Gillan would do.