Nik's note: Lately, I have been intending to focus on Bollywood slightly more in this blog. And there are few Bollywood movies I love more than Rajkumar Santoshi's cult comedy Andaz Apna Apna. It recently celebrated its 20th anniversary and I thought it would make a perfect post for my blog. Unfortunately though, I am terrible at writing stuff for my own blog and so I asked one of my good friends Ratna to help me out. She's an even bigger fan of the movie than I am and as you will see, has a hilarious style of writing. Ratna has Indianized her article very well and for those of you who might not get her references, I will explain them at the end of the article. I hope you enjoy the post and check out the movie. It is a total classic! 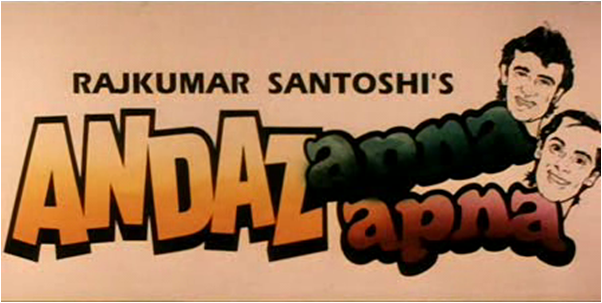 I am not going to make this a regular tribute post for Andaz Apna Apna, and there are a couple of reasons why. Firstly, I am not a 90s kid, i.e. I did not grow up in the 90s when this film came out (I was, by a happy coincidence, born in the very year the film released) and hence will not be able to chart the miraculous growth the film’s popularity saw over the course of these two decades. Secondly, I am sure there are plenty of Bollywood-knowledgeable people out there who have already written great tributes for the film, catching on nuances and Bollywood references in it which my comparatively less-competent eyes have missed even after watching the film half a dozen times.
Keeping these conditions in mind, what possibly could I, a kid from the new millennium, the millennium of shoddy sequels (read: the Dhoom franchise) and disastrous remakes (read: Ram Gopal Verma ki Aag) possibly write which involves Andaz Apna Apna? Well, if recent Bollywood buzz is anything to go by one topic comes to mind- Why We Should Never Ever *Ever* Make A Sequel to Andaz Apna Apna. 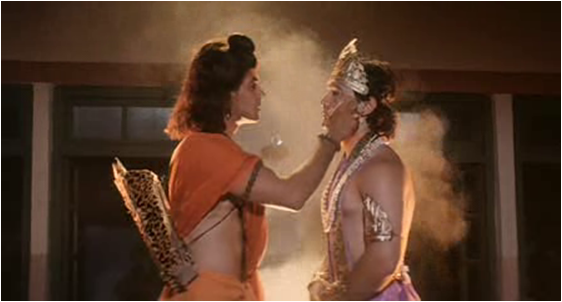 A couple of weeks ago my friends alerted me to the report that this gem from the 90s is going to be remade, and my first question was, "Who will play the leads?" 'cuz, let’s face it, it is no easy job recreating the magic Aamir and Salman created in the original. The only other place such crackling chemistry has been seen is between Ram and Bharat from the Hindu epics, as testified by trusty Sevaram Ji1. Now that tells you something. Coming back to the story, I got the heart-breaking reply: Ranbir Kapoor and Imran Khan. 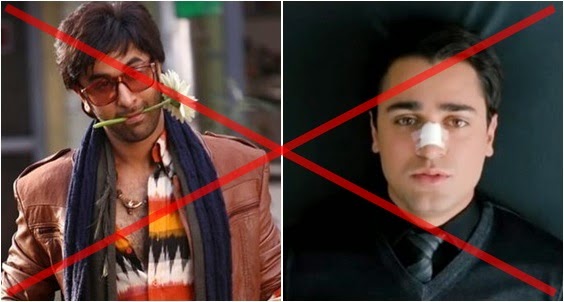 Now, don't get me wrong, I love Ranbir Kapoor. I really do. I mean, if there is one young man in Bollywood today who is making my dil badtameez2, it's him. But honestly, Ranbir Kapoor and comedy? That’s more like a badtameez combination, period. I knew it right in the interval of Ajab Prem ki Ghazab Kahaani that this blue-blooded, doll-faced, mind-blowingly talented heart-stealer is just not chalked out for the comedy stakes. His overacting (perhaps an attempt at overcompensating for the insipid punchlines in the script) was unbearable after a point and after the film I was almost ready to give up on him, when BAAM came Wake Up Sid! Anywho, point is, his Happy Club left me more perplexed, dejected and bored than happy. I was like, "Is this the same hottie from Bachna Ae Haseeno?!?" I did not even attempt to watch Besharam. The good people who made the film’s trailer put enough material in it to have me warned against such a life-threatening endeavour. Besides, once bitten, twice shy.
Don’t even get me started on how inappropriate Imran Khan is for starring in Andaz Apna Apna. Or for acting, in general. After a very promising start in Jaane Tu... Ya Jaane Na and Kidnap (though I have a creeping suspicion I am the only one who likes the latter. What? He showed enough of his abs in the film to keep me happy. Don't judge me, okay!), this Khan lad has sped his way downhill into the tooh3 of overacting. He showed some hope in Ek Main Aur Ekk Tu and then crushed it again brutally with the comic take on Swades that was Gori Tere Pyaar Mein and the plain nightmarish horror that was Mere Brother Ki Dulhan. While the rest of the acting world gets better with each film they star in, hamara Imran4 chooses to be the Benjamin Button of acting: worse with every consecutive film. 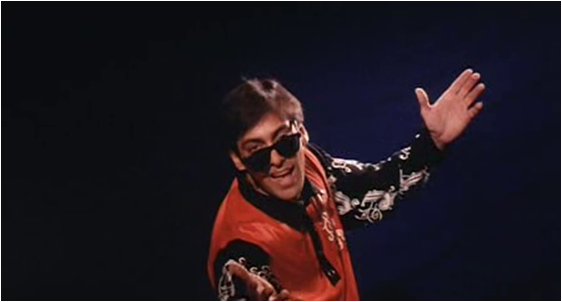 It's not Ranbir or Imran’s fault really. Comedy is a difficult genre to master and the best have tried and failed at it. These two are supposed to be two of the best that Bollywood has to offer today, and they are both *terrible* at comedy. I am not saying Salman Khan was a brilliant comedian when he did Andaz Apna Apna, but you have to agree there was something endearing about his portrayal of the slightly naïve, slightly stupid, slightly wicked Prem that has immortalized the character in the annals of Bollywood comedy. Who can forget the high-pitched "Oooi ma!5" he sounded at the drop of a hat? And Aamir’s Amar? It was Aamir’s Amar, enough said! Amar was the original bloody #1 most stupid duffer (waddup Monsoon Wedding reference) smartass with a heart of gold and a seldom appearing intelligence, and Aamir Khan nailed it with his infamous perfection. I mean, just look at his face6 in the restaurant scene where Prem stands on the other side of the glass laughing at their unexpected switch of fortunes. Pure, unadulterated over-smartness going into the perfect degree of shock that is required off someone who has to clean the plates of the couple of dozen guests at the restaurant that evening after realizing on the *same* evening that one is not going to marry the daughter of the crorepati7 from London after all. In two simple words, class acting! I admit I don't know who would be playing what, but neither could Ranbir pull something like that off nor could Imran match his uncle's supreme comic timing by even half. 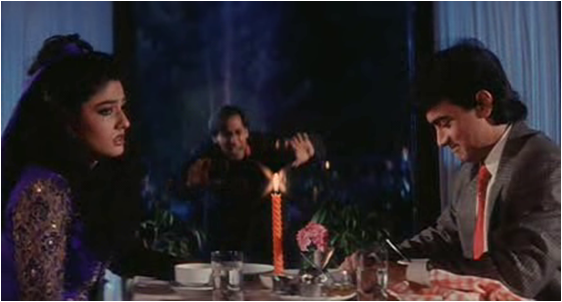 And it's not just Ranbir and Imran. There are plenty of other reasons why Bollywood is no longer capable of producing more Andaz Apna Apna’s. Look at the other members of the cast and crew, the film's director, Rajkumar Santoshi, to begin with. Whatever happened to him once he hit the 21st century?! What are all these ajab gazab prem kahaanis8 and phata poster nikla heroes9 he is subjecting us viewers to? Unlike the genuinely humorous Andaz Apna Apna (whose initial failure at the Box Office still remains a mystery to every Indian cine-goer, more so to us products of the next decade), I highly doubt Ajab Prem ki Gazab Kahaani and Phata Poster Nikla Hero will stand the test of time to emerge as cult hits. And I suspect it has a lot to do with the kind of scripts Rajkumar Santoshi has started directing. Suddenly it's no longer about comedy arising from unforeseen, albeit hilarious circumstances being tackled by ingenious methods by the stupidly smart and smartly stupid heroes anymore. Sure Santoshi is still following his tried and tested formula of the initial good-for-nothing becoming the eventual saviour of the day, but where are all the dhamaal10 punchlines and the listen-carefully-or-you'll-miss-it Bollywood references that are supposed to zing up the script? All we get in a Santoshi film now is idolization of the single hero for the first half-hour, followed by a couple of run-of-the-mill romantic songs between the hero and his arm-candy (who we will be returning to later) before the interval, followed by the rushed confusion of the story's climax where every character from the script crowds the scene in what is supposed to be a hilarious fight sequence (if it were not for its predictability) before we are lead to an abrupt resolution where the hero saves the day. Where are all the adorably memorable supporting actors of Andaz Apna Apna that have contributed to half of the film’s current status as a comic classic? I dare you, find me one supporting character from Santoshi's recent comedies that is as memorable as a Crime Master Gogo or a Raabert11. I mean, Santoshi made the original Andaz Apna Apna and now even he can’t make another Andaz Apna Apna. This, unfortunately, points to the fact that no one anymore can make an Andaz Apna Apna. 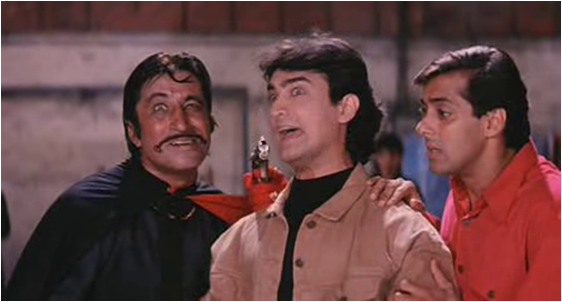 And here we come to the arm-candies, aka the Katrina Kaifs and the Ileana D'Cruzes of Bollywood. Enough has been said about their utter dispensability as far as the script is concerned, and yet it is proclaimed that no one would go watch a film that does not have at least one number where the heroine shakes her stuff on the dance floor. Perhaps this is one of the reasons I respect Andaz Apna Apna so much: the film does not objectify its female characters as overtly as they are done today. Yes Raveena Bajaj and Karishma were the trophy girls with the bucks who both boys were competing for and who were stupid enough to not recognize a guy from seeing him a day before in the garb of Nawabs12 (Wow, that sounds astonishingly like Taani from Rab New Bana Di Jodi13), but they made no qualms about it. They tempered their silliness with just the right amount of seemingly genuine wide-eyed innocence for them to not get annoying. Unfortunately, this can hardly be said of Katrina’s rendition of her character in Ajab Prem ki Ghazab Kahaani. And their costumes! That point I made about the ladies not being unnecessarily sexualized or objectified holds good here. Who can forget the teeny tiny white shorts over black bodysuit monstrosity that Karishma (Kapoor) flaunted in the scene where Dr. Prem Khuarana makes his entry in the house? I believe her stylist at the time must have been Superman. Anywho, the point is that instead of feeling the need to "strengthen" their film with an "item number,14" filmmakers of the 90s had enough confidence in their material to let their heroines look as unattractive as they wished to (surely Karishma Kapoor and Raveena Tandon were aware that they look unattractive in their outfits, right? Right?!). Which actress today has it in her to be able to pull that off? I suspect the answer once again is ‘no one’. 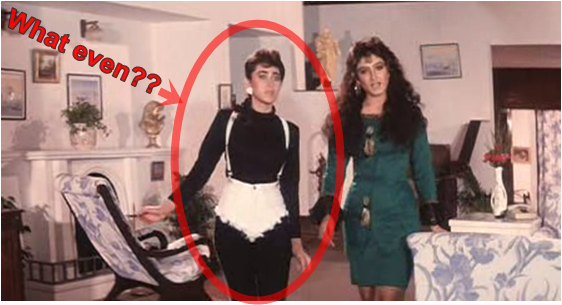 Among the reasons for not making a sequel to AAA elaborated above, there are a couple of others which jolt me out of sleep with cold shakes at night, such as the thought of the sequel having a Yo Yo Honey Singh15 soundtrack in it where the original Amar and Prem will be made to dance to lyrics like "Aaj green hain grass grass grass grass…16" Terrifying!
Anways, here's some good advice for the misguided folks of Bollywood who are considering making a sequel to Andaz Apna Apna: don’t do it. Every time you feel the idea creep up to your brain, remind yourself of what happened when the makers of Hera Pheri thought it would be a good idea to make Phir Hera Pheri, and that should do it. Amar-Prem there can only be one! 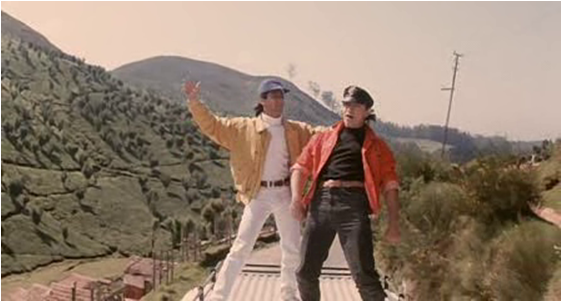 -by Ratna A. Chaudhuri
(If you liked this article, please pay Ratna in Benedict Cumberbatches. She says thanks.)

All the movies referenced in the article:

Isn't 90s Bollywood dancing just the best? I wonder what the choreographers were on...