I think I need to start off by saying that my choices for the Blind Spot every month are done completely at random. I believe that some people have some kind of a thought process behind what film they watch when, but for me it's generally just availability and some sort of variety that factor into what my blind spot will be, which is why after last month's Blue Velvet, I decided to go with Judgement at Nuremberg for my April Blind Spot. 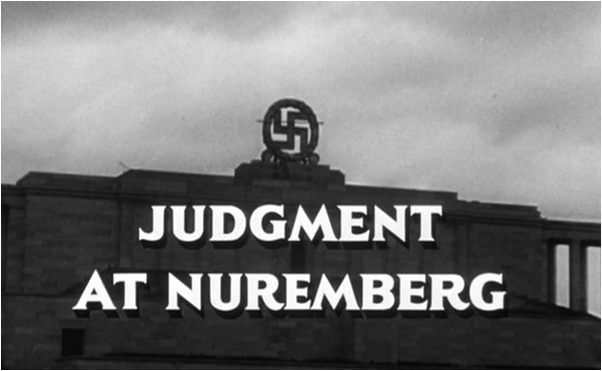 Now I gave this entire preamble because I needed to point out that even though it was chosen at random, there couldn't have been a more apt time to watch a movie like Judgement at Nuremberg. With the current state of affairs in Europe and also in my country, where a man connected to crimes of religious intolerance is one of the leading candidates for the upcoming elections, I couldn't stop thinking about how important the things shown and explored in this movie are. I know that I ought to view a film objectively, especially in the case of these blind spot movies where we see "bonafide classics" with new eyes, but like Justice Ives at the end of the "judgement" in the movie says, we need the true perspective of history to understand what has happened and what has been shown to us, so it was really impossible to not to let present circumstances have some bearing on it. I'll even go as far as to say that I am not sure if my reaction to the film would have been the same if I had seen it before watching The Act of Killing.

To put all this in perspective, I should first explain what this movie is about. Judgement at Nuremberg us based on the Nuremberg Trials that were held in Germany after the Second World War. In the film, Judge Haywood heads a three-man tribunal that try four prominent German judges and prosecutors who had operated during the Third Reich, including famed jurist Ernst Janning. The film chronicles these trials and Haywood's evaluation of them through events held in the court and his interactions outside. The trials themselves prove to be quite the battleground- between morals and laws, individuals and society, right and wrong- and these are argued over by the ruthless prosecutor Col. Lawson and the spirited defence lawyer Herr Rolfe. 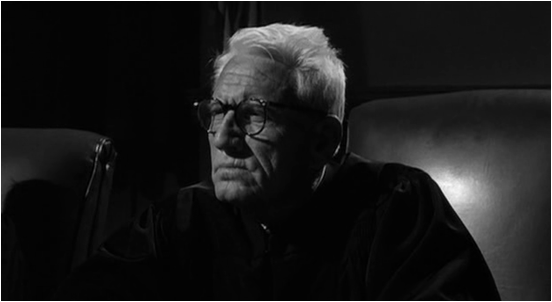 Two words kept coming to me again and again while I was watching the film: I have already mentioned the first above and it's "important". The moment Rolfe begins his opening argument, I knew that I was watching something of great significance. Judgement at Nuremberg isn't merely a "Nazis were bad people" movie. The film tries to explore the role of law in society and what happens when that becomes corrupt. I found it very engaging because my own idea of right and wrong is sort of based on what is legal and what isn't. I find the idea of morals quite confusing because there can be so many sides to a problem and I always overthink things, and therefore it is good to have a set of rules to go by. This film shows what happens when those rules get skewed and I found myself reflecting on what I would do in similar circumstances (as much as I hope they never happen again, of course). The film just questions so much and I loved that it didn't give us just one point of view to see through but there were characters like Rolfe and Janning who constantly pulled our attention and our feelings and our own judgement in different directions. I found all of this incredibly crucial to our understanding of people and the world. For instance, the two witnesses that are called to the stand- Rudolph Petersen and Irene Wallner and their stories and how both attorneys question them- there IS a sick logic presented to us in what Nazis did to them but that doesn't make them any less tragic. 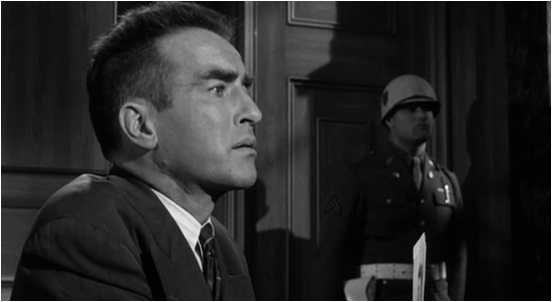 The other word that I kept thinking about was "serious" because bloody hell, this is not some entertainer. Don't get me wrong, apart from the initial 3+ minute long overture that I skipped, I was riveted throughout its 3+ hour running time. It is just that it is a very detailed film that is talking about some grave things and one needs to really give it their full attention. It is of course a courtroom drama and so there is some legal cunning shown in it too, which adds to the whole experience. Like for example how the character of Rolfe, who I thought started out so idealistically, does use all sorts of the tricks in the trade to save, well, Nazis but he's still likeable and conversely Lawson, who is fighting for what we do essentially think is the right side but is shown as someone much more manipulative and disagreeable.

I found it interesting how the film was both conventional and unconventional. All of the close-ups and the zoom-ins! I wasn't a big fan of the cinematography of this film as I found it quite severe-looking and at times jarring, apart from the shots of Marlene Dietrich's face. Though I loved most of the dialogue, it is also very verbose and didactic and that too is overdone at times. But at the same time, its not just a mainstream drama. The film used real footage of the Nazi concentration camps and I cannot imagine what it must have been like for audiences in the early 60s to watch something like that. These things also added to the serious feel of the movie. 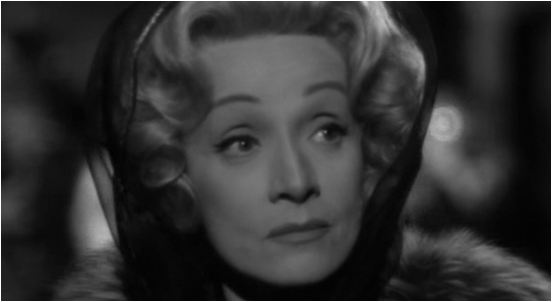 One of the biggest reasons why this film works as well as it does is obviously its cast. The film is like a masterclass in acting. And quoting directly from my notes, what a holy fuck of an ensemble! Spencer Tracy played Haywood, Burt Lancaster was Janning, Maximilian Schell was Rolfe, Montgomery Clift was Petersen, Marlene Dietrich played Frau Bertholt, Judy Garland was Wallner, Richard Widmark as Lawson and then there was a very young and spry William Shatner as Captain Byers. Honestly speaking, they were all pretty great. The film got numerous acting nominations and one can see why. My favourite most probably was Schell. I have never seen him in any other movie but the energy and the intensity that he brought to his role was amazing. He commanded our attention completely whenever he spoke. I was instantly hooked to his every word. Of course, his role is perhaps the flashiest and he did end up winning the Best Actor Oscar for it too, but the conviction of it all is what makes it so excellent. 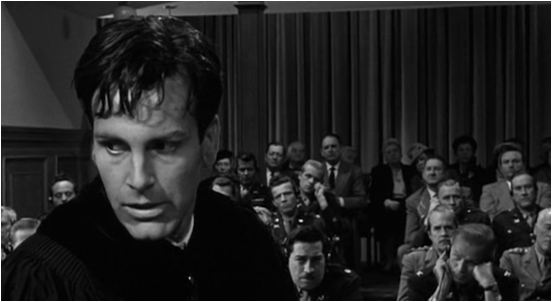 I was really surprised by both Lancaster and Clift. In case of the former, I could never imagine playing him anyone non-American ever but he was really fantastic in the film. His character Janning is in the centre of the trials and he is silent about his deeds throughout most of the film and we know that his statement is coming but it is still powerful when it happens. Lancaster is a big man and there is something about his stature and his personality that in spite of playing a taciturn man makes him stand out in the crowd. I thought it was perfect casting. Even more perfect and perhaps tragic was that of Clift's. The vulnerability that he shows as Petersen, a man who was maimed by the Nazis in a horrible way is absolutely gut-wrenching. Both these performances are tremendous and things like their accents become too trivial in scope. 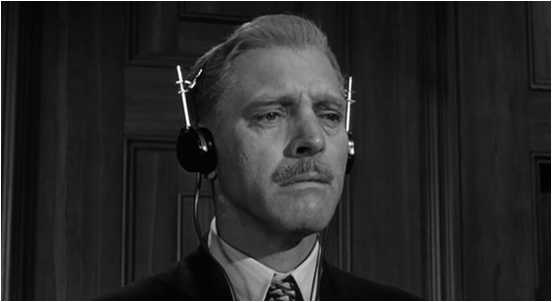 I also really liked Tracy. His Haywood has a lot of wisdom but there is also a great deal of curiosity, acceptance and perceptiveness. He was like a foil to all the really hard stuff in the film and Tracy has such a natural charm in his performance that perhaps because we see so much of it through his eyes, it becomes slightly easier to take in and definitely to understand. In case of the women, I found Garland's role to be very unexpected too and she gives quite a poignant performance. Dietrich's role and performance were perhaps the most complex in the film. As opposed to someone like Clift, she played Bertholt with a lot of restraint but one can see the pain there. As I said, I really appreciated how the film showed the various sides to this whole problem and her story runs counter to the trials as she feels that the American judges wronged her Nazi husband.

WW2 is probably Hollywood's favourite period to set movies in and we get a few every year. They have become common, to be honest, but Judgement of Nuremberg is quite something else because as I wrote right at the beginning, this film is about so much more than just that era. I mean the biggest reason why I felt that it was so important was just because it exists and people need to see it to understand what can happen to a society when crimes take place in the name of law. There is a reason why countries used to ban anti-war films and why something like The Act of Killing was as impactful as it was- films are probably the most prominent and communicative form of art in the world today and they have the power to change people's minds. I really feel that something like Judgement at Nuremberg can be that effective. I think that's why Stanley Kramer made it, not just as a historical record but as a reminder of how bad things can get if people forget the rules of civilisation and humanity. 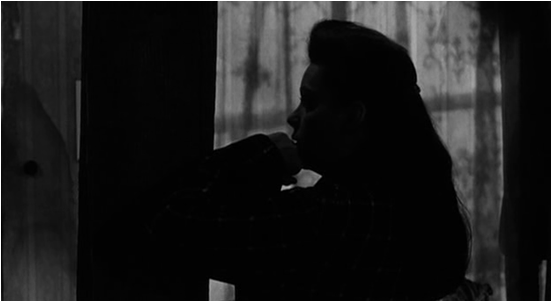 Okay I'm probably getting quite edifying myself but I was genuinely moved by the film. I cannot recommend it enough to people who haven't seen it. I don't know if everyone will love it as much as I did but if it makes them think about the issues in it at all, it is good enough for me.