"Today I honor the victim's first."

I have already spoken about how the current series of Doctor Who is way more cinematic than all the others before it. Episode 7x03- "A Town Called Mercy" might just be the highest point of the series in this aspect. A sci-fi western if there ever was one, it looked and sounded absolutely fantastic, and this is coming from someone who regularly proclaims that westerns are her least favourite genre and equal to sleeping pills. I loved it! 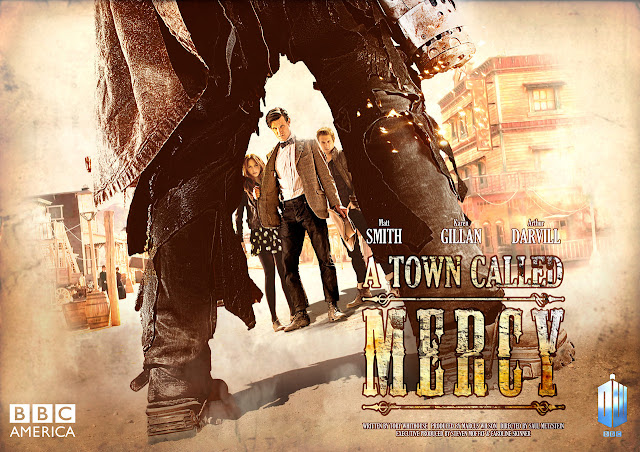 Written by Toby Whithouse, who also wrote The Shining-esque "The God Complex" last series, this episode explores the morality of a character like the Doctor. Whatever little I have seen of westerns, there are always important characters that have both good and bad in them- outlaws, corrupt rangers, the "loose women". I guess that is why this setting was the perfect backdrop to the Doctor's own fight against good and evil, and how both carry consequences. The episode was directed by Saul Metzstein, who also directed the previous episode "Dinosaurs on a Spaceship" does a breath-taking and a very authentic job here, at least for me, to bring together all the necessary elements of a western, with a bit of Who of course.

1. The episode starts with a mysterious alien named the Gunslinger chasing and gunning down another alien and declaring that he has one more name in his kill list, The Doctor. Firstly, I must say that the Gunslinger looked great. In theory he could have looked comical- what with the mixture of Clint Eastwood and the Terminator maybe, but he does manage to evoke fear. Especially when he walks, you can feel how powerful he is. An actor named Andrew Brooke played him and he had to be covered in makeup and prosthetics. Well done make-up team! Also the effects team, because the way the Gunslinger seems to appear and disappear was uber cool. 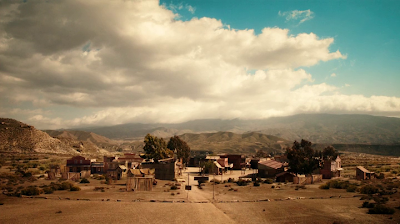 2. The setting looks gobsmackingly beautiful. The episode was actually filmed in Almería, Spain, where more than a 1000 westerns have been filmed, including A Fistful of Dollars. So they really did capture one of the truest depictions of western towns that we have seen on the silver screen.
3. The Doctor, Amy and Rory arrive at a town called Mercy accidentally, as their original destination was the Day of the Dead festival in Mexico. But they decide to stay because "Anachronistic electricity, keep-out signs, aggressive stares... Has someone been peeking at my Christmas list?" Poor Doctor. He really loves an adventure, and I think his secret wish to be a cowboy comes true in this episode. Well, sort of...

4. Because when he next walks into a saloon (uh duh), he orders "Tea. But the strong stuff. Leave the bag in" all while trying to battle a toothpick in his mouth. He isn't even able to walk with a cowboy strut without making it awkward. So cute.
5. But then when he announces his name to the people at the saloon, along with the fact that he is in fact an alien, they literally carry him out and throw him over the town's boundary of wood and stones, and then he is made to come fact to face with the Gunslinger. But before anything can happen, the town's marshall, Isaac comes in the way and takes the Doctor back in.
6. The truth is that the alien doctor that the Gunslinger wants isn't the Doctor himself, but Kahler-Jex, an alien whose ship had crashed near Mercy and had subsequently made it his home and helped its inhabitants during a cholera outbreak and also brought electricity to it. However the appearance of the Gunslinger, who had demarcated the town and blocked anyone from entering (unless they don't have any food with them like the Doctor and his companions) or exiting it, and his demand for Jex had turned the inhabitants against the 'good doctor'. Still Isaac, grateful for all the things Jex had done for Mercy, refuses to give him up because he thinks that will bring chaos into it.
7. The Doctor then goes to get the TARDIS to evacuate the village, on a horse named Susan, who wants his master to "respect his life choices". Obviously the Doctor speaks horse, and his apparently two way conversation with Susan brings much hilarity. As someone said on Tumblr, Susan and Tricey should get their own spin-off show. I second this motion. 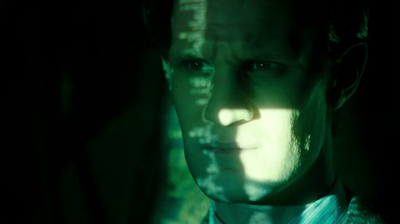 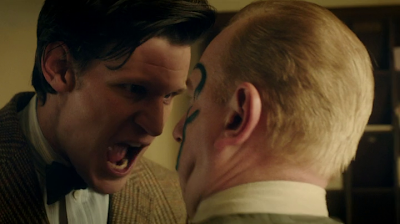 8. Soon the Doctor chances upon Jex's ship, which isn't damaged at all, and from its records finds out that Jex was in fact a member of a group of scientists who had experimented on their people and created cyborgs to save their war-ravaged planet, and that the Gunslinger was in fact one such tortured cyborg. On his return, he demands an answer from Jex. We get to see a very dark side of the Doctor here, full of anger and hatred, which is further aggravated when Jex says that in him, he sees a mirror of himself.

9. In his anger, the Doctor drags Jex out of the town, across the line. He even points a gun at him, which is very uncharacteristic of him, and reminiscent of his ruthless treatment of Solomon in the previous episode. But Amy intervenes, with a gun of her own which she keeps shooting accidentally. "Everyone who isn't an American, drop your gun!" Isaac remarks. This episode is full of great dialogue. Here, when the Doctor tries to tell Amy that he wants to honour the victims of all the people he saves because of his mercy, Amy responds and tells him that they have to be better than this, and this is what happens when he travels without companions for too long. Amy reminded me a lot of Donna at this point, who too realized that the Doctor needs to be around people to stop him from going into the grim places of his personality, which let's face it are v.v.v. grim indeed.
10. The Doctor realizes his mistake of course, but by the time he tells Jex to come back, the Gunslinger has arrived already and is about to shoot when Isaac comes in the way and gets hit instead. Ben Browder, who played Isaac, was really good. As I read in a review, he tried doing his best "Josh Brolin" :P His character was strong and kind and as he lies dying in the Doctor's arms, he tells him that both he and Jex are good men. He dies making the Doctor the marshall, and then the Doctor makes Amy his deputy.
11. One thing I will say negatively about this episode is that Rory barely has any role or lines in it. Boo.
12. The Gunslinger then gives the Doctor an ultimatum, till noon the next day, to hand Jex over otherwise he will show no mercy to anyone.
13. The scared townsfolk want to give in and they all come to demand the Doctor to fulfill the Gunslinger's demands, but the Doctor tries to show them how this will be against Isaac's wishes and his death would thus prove futile. Still one boy tries to engage the him in a gun duel, but he manages to pacify him and says one of my favourite quotes from the episode, "Violence doesn't end violence, it extends it." 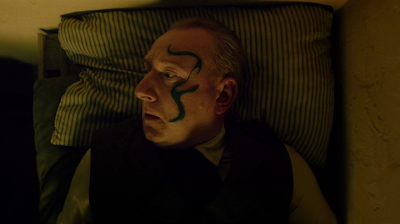 14. The best part of this episode is definitely the character of Jex and closely he resembles the Doctor's. Even the quote above can be used to define all of the Doctor's existence in one way. Adrian Scarborough does a splendid job with this role, showing the guilt and self-hatred and bitterness and goodness still of this character. His chemistry with Matt Smith is brilliant, and both the actors play off each other very well, as their characters demand it. When the Doctor says that for Jex, Isaac's death would be another casualty in his "endless, bloody war", it literally echoed Madame Kovarian in series 6's "A Good Man Goes to War" in which she says that Melody Pond is their weapon in "the endless, bitter war" against the Doctor. Jex's goodness is a way to compensate all the destruction he has caused. He bitterly provokes the Doctor saying, "It would be so much simpler if I was just one thing, wouldn't it? The mad scientist who made that killing machine, or the physician who has dedicated his life to serving this town. The fact that I'm both... bewilders you." But then he tries to explain how he is very affected by all the evil he has done in his life, by telling him of a belief of his people about how when one dies, they have to carry the souls of all who they've wronged and Jex is scared of death because of the burden he would have to carry.
15. All these things completely reflect back on the Doctor. He is exactly all these things too. His said burden is perhaps the biggest in the universe, even moreso because he understands why. As Jex then comments, "We all carry our prisons with us. Mine is my past, yours is your morality." This obviously is a food for thought, because very often we see the Doctor stuck between trying to save everyone, but having to choose the more righteous side, and then hating himself over his mercy. 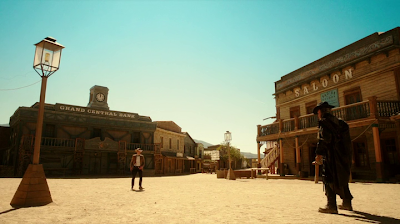 16. The Doctor then gets a plan to trick the Gunslinger and save Jex. At this juncture I will stop with the storyline (GO WATCH IT!) and just say that whatever happens redeems both the Gunslinger and Isaac and all ends well in the town of Mercy. 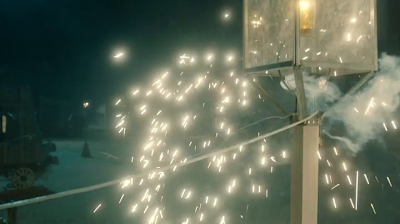 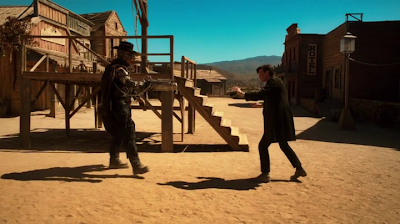 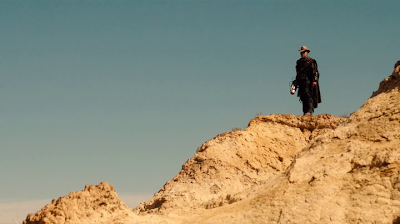 As I said, the look of this episode is to die for, with all the scenic beauty of a true mid-western town from the 19th century. Along with that, Murray Gold's score is excellent and adds much to the atmosphere. The ultimate winners of this episode are Whithouse, Scarborough and Smith. Whithouse wrote a superb tale that shows us the lengths of the Doctor's sense of justice and morality code. The characters were all shades of grey, especially Jex, brought so wonderfully to life by Scarborough. He got voted as a character and not a monster by the BBC website, something I completely agree with. We cannot call him a monster because of how much he and the Doctor are alike. 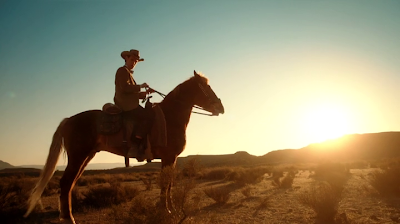 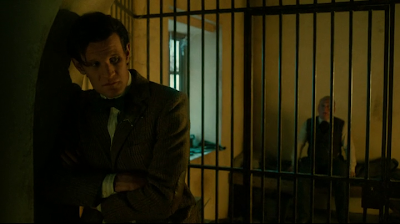 And of course Matt Smith is amazing in this episode. His range, from being the bumbling idiot in the saloon to someone who very well deserves titles such as "the Oncoming Storm" or "the Predator". He brings out both the light and the dark in the Doctor. His hurt and disgust at seeing his crimes in Jex's ship, his anger at Jex, his grief at Isaac's death, his weariness at listening to Jex's all-too-familiar tale- all the facets are shown equally and expertly by Smith. Gillan too is very good and we just continue to be scared about what will finally drive her away from the Doctor after two episodes (gasp!).

An outstanding episode, "A Town Called Mercy" has definitely become on of my favourite Doctor Who episodes ever and is the best one of the series for me so far. Next week, we see things from the perspective of the part-time time travelers, the one and only Ponds in "The Power of Three". Not just Amy and Rory, but Brian is back too! Also UNIT has returned. Oooh.