I don't think a better quote could be used to describe the second episode of Doctor Who series 7, "Dinosaurs on a Spaceship". 'Tricey' of course refers to the triceratops that the Doctor, Rory and Rory's awesome dad Brian ride on to escape from bickering robots. Oh yeah... it was that kind of an episode. The episode was written by Chris Chibnall and directed by Saul Metzstein. This episode follows the mini-blockbuster movie trend started by the last episode "Asylum of the Daleks". While that was of a creepy horror/family drama genre, this is like Jurassic Park on a spaceship- a total fantasy romp. True it did not remotely reach the standard of brilliance set by the previous episode, but "Dinosaurs on a Spaceship" definitely had its moments.

1. The show skips around many places and periods before the credits. This is to show the "team" that the Doctor recruits for this new mission that he has no idea about. We first have Queen Nefertiti, who is into the Doctor and smelling (?) him in some weird way. All I can say, best not let River see you, sweetie. She was played by Riann Steele, who although beautiful, could not save this character from being bland and forgettable. 2) Also Rupert Graves, who plays the adorable Lestrade in Sherlock, was perhaps the worst part of this episode. He wasn't terrible, but his character, Riddell was kind of super annoying, which is a shame because I was ready to fall in love with him Oswin-style. He was rude, misogynistic, "a walking innuendo" (which was just awkward), and no one could understand why the hell the Doctor had befriended him.
3) And now to the good things, namely Mark Williams and David Bradley. Three cheers for the Harry Potter cast!! Williams was born to play Brian Pond Williams. His interactions with everyone, but especially Rory were priceless. The golf balls part was a bit cringe-worthy, but the trowel comment, "What sort of a man doesn't carry a trowel? Put it on your Christmas list" and the drinking tea while watching the Earth from the TARDIS- ah I love him! I want him to be my dad, or a really nice uncle. (I'll get to Bradley in a while).

4) So anyways the Doctor gets all of them (Brian accidentally) to come on a spaceship with *Spoilers- in a River Song voice of course* dinosaurs in it. He has to stop it from its course towards Earth, otherwise it will be blown up with missiles by this really mean Indian lady.
5) Due to teleports, "Well thank you, Arthur C. Clarke," the Doctor, Rory and Brian get separated from Amy, Neffy and Riddell and two teams get formed as a result, both trying to figure out what is happening and saving their butts from dinosaurs- the former from pterodactyls and the latter from baby T-Rexes.

6) It won't be unfair to say that this episode belonged to the Ponds/Williamses. I already mentioned Brian and Rory, and now it's Amy's turn. She gets to play Doctor in her little band, show how knowledgeable she's become in her travels- "Whenever you enter somewhere new, press buttons", fangirl over Neffy and be a total queen.
7) Hey Rory is 31! Who knew? Does that mean Amy is 31 too? Ugh, this timey-wimey stuff is confusing.
8) The other gang in the meantime get chased by pterodactyls into a cave where they run into two bickering robots who are expertly voiced by David Mitchell and Robert Webb. They work for Solomon, played by Bradley, who is an excellent villain. He is greedy and diabolical. I liked that they went with a proper villain like that, especially after last week's conceptual evilness of Daleks and the Asylum. What makes Solomon even more reprehensible is that all his motives are monetary-based, which is why he comes to the ship on the first place as the dinosaurs are very valuable. He even puts a price on the entire Doctor's team, and when he cannot find the Doctor himself on any records, the Doctor responds by saying that he's worthless (heart = broken).
9) Also evil little Solomon orders the robots, who have fantastic arguements with Rory, to injure Brian, but that is a good thing since we, along with Brian, get to see Rory's "awesome nursing skills in action". Oh I love Rory so, but this was still not his crowning moment in the episode.
10) During Amy's snooping, she finds out that the ship was in fact a Silurian ark, as the dinosaurs were being taken to another planet to rehabilitate that. But the nice Silurians were mercilessly killed by Solomon. 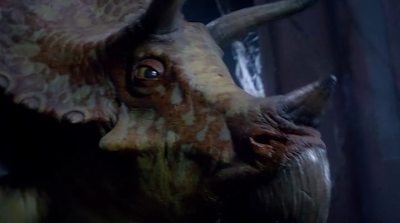 11) Of course a very important and the final member of Doctor's team in this episode, one who will forever be known as the Agent Phil Coulson of the Who-niverse (thanks Tumblr!) was Tricey, the golf-balls loving triceratops. Anyways, Doctor, Rory and Brian escape Solomon and the robots while riding him. Geronimo!
12) The missiles are soon launched by evil Indian lady and everyone is getting ready for it. Riddell for once makes himself useful by acquiring "large" tranquilizer guns and Rory tries to help the Doctor with his own companion knowledge. It is at this point that 'The Thing That This Episode Will Be Remembered For Forever" happened-

I was watching this very early in the morning and literally said "What. Just. Happened?" aloud to no one at all. Tumblr obviously died as a result. RIP. Also, a hundred million fanfics came to life.
Still, this little scene is followed by Rory's crowning glory moment, another example to show why he is one of my two most favourite companions-

13) So then Solomon demands Neffy to let the others get control of the ship. He kills Tricey to prove his point *sniff*. She does come, and being a benevolent leader (as shown from history and not this episode) and gives herself up, in spite of Doctor's opposition. But then he gets one of those plans.
14) The plan is that they'll fly the ship away from earth. First this is an obstacle as it can only be flown by two pilots of the same gene pool, but hey! Brian just happened to be there that day- we can either call this contrived or think that maybe, possibly, the TARDIS could have figured something out and thus materialized when he was with Amy and Rory. Whatever. As Matt Smith said, "Never apply logic to Who." Then the Doctor has to save Neffy from Solomon while making the missiles target his ship instead. And in the meantime, Riddell saves them from the danger of oncoming dinosaurs.
15) My favourite moments in Who are always the quieter moments between all this hoo haa. In this episode, it is when Doctor and Amy discuss how his visits are becoming fewer and further in between, which is a real concern to her as she is still the girl who waits. The Doctor assures her that he isn't trying to wear them off and then in a foreshadow-y move that would have made Christopher Nolan proud, he says "You'll be there till the end of me" to which Amy replies, "Or vice-versa." And then they look at each other in this really concerned manner. 16) Okay so that scared me. I have a horrible feeling that something bad will happen to Amy since no one will actually believe Rory dying. Gahhh.
17) Anyways while Amy heads off to fight dinosaurs with Riddle like a man, or well two men, the Williams men fly the ship and the Doctor goes to save Neffy. He does so, and then in a very uncharacteristic fashion, leaves Solomon to die from the missiles. I did think it was odd. This is something the David Tennant Doctor would have never done, but when you think about the genocide committed by Solomon, it is a fair judgement. Just not what we are used to.
18) The ending is as happy as they come. Brian sees the earth from the TARDIS as mentioned above, but then also goes traveling all around it. The dinosaurs get a planet named Siluria. Neffy and Riddell become lovers because she does prefer his innuendos to her boring husband. Only the Doctor looks really concerned. About what though, we can only speculate until Steven Moffat puts us out of our misery ("or vice versa"). 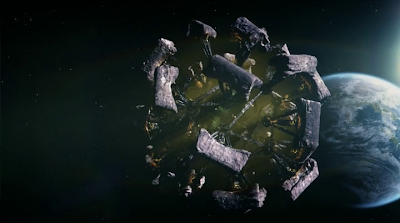 Definitely a fun episode, see! The ship looked pretty cool and the dinosaurs were very believable. It is sad that we have to keep comparing it to the previous episode, but since that was so perfect, it is a little difficult not to do so. Still, with characters like Brian (who will be back for "The Power of Three"!) and the robots and that fateful kiss (Drory forever), this episode will always be remembered fondly.

Now next week is the episode I am looking most excited for, except for "Angels in Manhattan" of course, though that's more of a scared and anxious excitement. The excitement for "A Town Called Mercy" is pure and unadulterated. Trust Doctor Who to be the only thing outside of a Quentin Tarantino movie to make me excited about westerns. But seriously, this one looks cool. Can't wait!