"Because you were the first. The first face this face saw."

I love the Ponds so much! Their penultimate episode in Doctor Who, "The Power of Three" made sure that we, along with the Doctor, will remember what an incredible pair of companions they are. Their brilliant chemistry with Matt Smith's Doctor, especially Karen Gillan's Amy will be sorely missed, to put it mildly. She's back to being my favourite companion along with her husband Rory and previous companion, Donna. She certainly is the companion I am most fond of, because my journey with Doctor Who started with her as much as with Smith's Doctor. 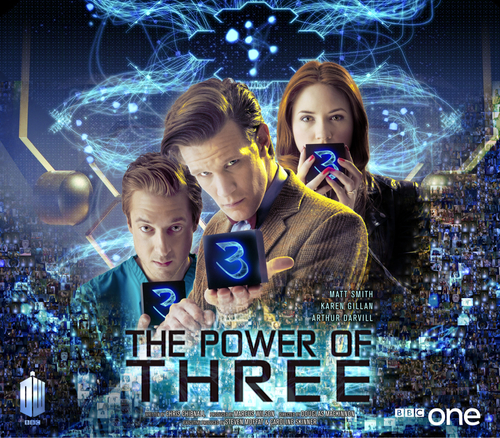 Still, I will have to say that "The Power of Three" is probably my least favourite episode of this series so far. It is written by Chris Chibnall, who also wrote "Dinosaurs on a Spaceship". The main plot with the cubes, highly reminiscent of the Russel T. Davies era, is not actually that interesting. However, seeing how fantastic this series is going, the episode had some truly unforgettable comedic and emotional moments.

1. I love the beginning where they show a montage of all the adventures that the Ponds have had with the Doctor so far, with Amy narrating in the background.
2. The cubes have come! I have no idea how many cubes they made for this episode. Also Brian! I love Mark Williams as Brian Williams. Least irritating relative ever (Wilfred Mott was adorbs but gosh he made me cry a lot)!
3. All the news channels talking about the cubes, plus a little Brian Cox, is very RTD. You know how all the episodes have been cinematic till now- well, for me this episode was plainly of the RTD genre. But I suppose it is fine for it to be less cinematic because right now the writers are just making sure that we are completely head over heels in love with the amazing Ponds, so that they can snatch out our hearts and drive a bulldozer on them next week. MOFFAT!! *shakes fist*
4. It's been 10 years of travelling with the Doctor for the Ponds? What? I know we aren't supposed to question the logic of Doctor Who, but still, it is a little hard to believe that it's 2020 for them.
5. RORY IN HIS PANTS! Amy's reaction is HILARIOUS here.
"There are soldiers all over my house and I’m in my pants.”

6. New character! Yaaay! I loved Jemma Redgrave as Kate Lethbridge-Stewart. She had such a calmness and wisdom about her. I haven't watched any Classic Who, but she's the daughter of long-time companion Brigadier Lethbridge Stewart who died in the last series. 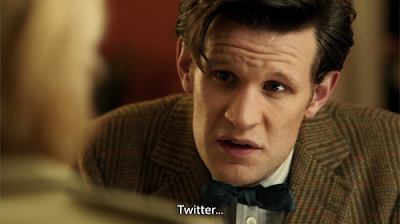 7. Anyways she's heading UNIT (RTD!) now, and I love it when she says, "With a dress sense like that, you must be the Doctor." BAZINGA! Also then their discussion on how people have taken the cubes home and opened more than a 1000 Twitter accounts for them, the Doctor's reaction is priceless. Almost made me give up Twitter.
8. That of course was only the start. Matt Smith is really funny in this episode. The Doctor's inability to be patient made him, and the Ponds go mad. "Patience is for wimps!" Rory's face here has to become a meme.

9. Anyways the Doctor goes and the Ponds get on with their lives. I like this look into their life a lot. It shows how "normal" people can have such fantastical inner lives, and also how both these existences have meaning for them.
10. Things You Can Do With Extraterrestrial Cubes: Planet Earth Edition- 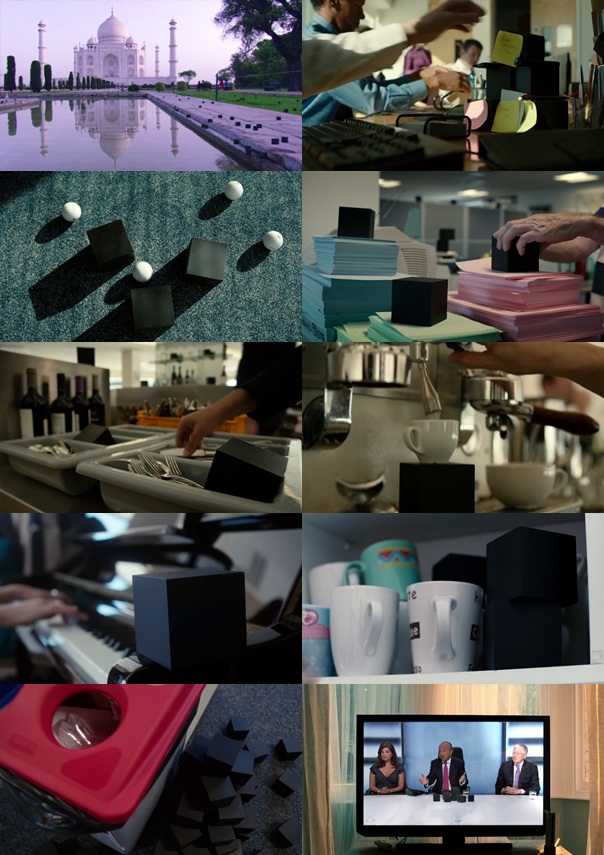 11. Brian and his patience with the cube almost parallel's Rory's with the Pandorica. Williams is so subtly comic. I wish he comes back later on (yes I *do* know how unlikely that is, but he's just so awesome!).
12. I love how the Doctor tries to do good- like when he takes Amy and Rory to the newly opened Savoy for their anniversary, only to have a Zygon ship under it. Or Amy getting married to Henry VIII on the same day. Poor Doctor.
13. Brian, along with being hilarious, also has a more meaningful role in this episode when he asks the Doctor about what has happened to his previous companions. It is both a painful look back and terrifying foreshadowing. Who knows what fate awaits the Ponds :S Makes one think that as spectacular as it must be to be someone like the Doctor, it must also be infinitely sad.
14. This was my favourite part of the episode-

I'm going to miss Amy so much. She is also the prettiest companion in the new series. Perfect ginger queen.

15. So the Doctor gets domesticated with his bffs the Ponds. There are a lot of throwbacks in this episode, not only of RTD, but also many things from the Amy-Doctor-Rory run. There are the pictures in the poster and then all three eating fish-custard together. I don't think we will ever see fish-custard being eaten again :'(
16. Everything in this episode made me so sad :( :(
17. One day the cubes get activated and all of them behave differently, as Kate points out. I liked this aspect of the cubes, even though it did not really make sense in the big picture. Still, the cube that plays the Chicken Dance music is boss.
18. Another excellent part of the episode comes when the Doctor, exasperated with these elusive cubes, goes out to the river Thames to get some fresh air, since UNIT obviously has its headquarters in the basement of the Tower of London, and Amy goes with him and they have their heart to heart. I can easily imagine this one scene being one of the best, not only in this series, but ever.
Amy and the Doctor talk about how the Ponds seem to be stopping in their "Doctor life" to get on with their "real life". How it now feels like running away from responsibility, in response to which the Doctor says a new "life quote" as I like to call them, that is just purely inspirational and beautiful-
"I’m not running away. But this is one corner… of one country, in one continent, on one planet that’s a corner of a galaxy that’s a corner of a universe that is forever growing and shrinking and creating and destroying, and never remaining the same for a single millisecond. And there is so much, so much to see, Amy. Because it goes so fast. I’m not running away from things, I am running to them. Before they flare and fade forever."

By this time I was already in tears, but then Amy asks him why he keeps coming back to her and Rory, and I completely lost it-
I love their relationship. The girl who waited and her imaginary friend, the raggedy man. Obviously this has always been what we thought of their relationship, but it is obvious now that she means a lot to him as well. The Doctor needs the Ponds and his Amelia Pond now more than they need him, and all the episodes in this series have made us understand that. Their exit is going to be deadly.

19. Anyways, back to the cubes now. The power suddenly goes off and then the cubes start ticking from 7 to 0. Then they emit the electrical currents they had absorbed to attack the hearts of the humans, causing them to die due to cardiac arrest. The two-hearted Doctor also gets affected, as his left heart stops due to this. Still, they pinpoint all the seven places these surges of electrical waves are coming from, one of which is the hospital where Rory works.
20. Oh yeah, Rory and Brian were abducted by these weird aliens in scrubs with mouths shaped like gas masks-meet-puffer fish, who took them to the space ship that is connected to the hospital through the portal in the goods lift. Yawn.
21. So Amy, Doctor and Kate go to the hospital, and just as the Doctor finds the little android girl who is the source of the cubes' power in that area, he goes into cardiac arrest again, which leads to another sexy Doctor+Pond moment. The last one was also in a Chibnall episode- remember? Obviously you do. Over here, it is Amy instead who literally rips open the Doctor's shirt to well, give him an electric shock to restart his heart.

God I love this show. Notice how the bow tie stays on.

22. Okay this is where I leave you. The ending is definitely the worst part of the episode, even though there is a very scary-looking villain, a clever observation by the Doctor that humans should not judge other races' bedtime stories because "You can talk -- wolf in your grandmother's nightdress?", more scary foreshadowing, a truly terrible last line by Amy explaining the episode's title, and Brian Williams everybody- 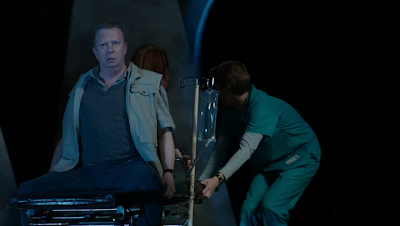 So yes, as an episode about cubes, "Power of Three" was kind of blah. But it shines in showing us the inner life of two of the longest running companions in new Who, the alien-ness and childish qualities of the Doctor, his poignant relationship with Amy, and a lovely new character in the form of Kate. As I said, it is a set-up for the next episode, "Angels in Manhattan" so that like the Doctor, we are more attached to the Ponds than we have ever been, which will make their farewell truly sad.