Making a Case for Best Actor for Tye Sheridan

For my second entry for Stevee Taylor's awesome "Making a Case For" Blogathon, I look at one of the most touching performances I have seen this year with hopes that it gets some awards attention when the time comes. 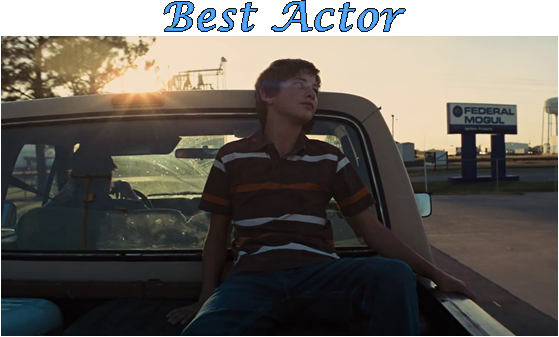 Mud is a film about a young boy coming of age and realising that true love does not always exist in real life, as much as we want it to. Tye Sheridan plays Ellis, the boy who has these experiences and a lot of the film is seen through his naive perspective. He is, throughout most of the movie, shy and restrained because he is also going through the process of becoming a man and all the ideas that go along with that, but you can see his innocent ideals and hopes in his eyes. It is these very eyes that seem to burn with anguish when he has to face the harsh realities of relationships and life and his outburst then becomes all the more heart-rendering. It is a very beautiful and balanced performance by this young actor who was only 15 when the film was shot. Last year, my favourite performance was by a 9 year old girl. You could say that I have a soft spot for child actors, but only because it is astonishing to see someone so young capture all these emotions with such intensity that even grown-ups sometimes can't. Sheridan does such a feat in Mud and though it is probably impossible for him to get proper recognition, what with a super-competitive year like this and the Academy's predilection towards older actors, but one can hope :)