Hiiii guys!! Let's just get down to my thoughts this week-

1) So remember how I talked about an inter-year drama competition in my college in the last thoughts post? Well, guess whose play grabbed the best play, best director, best actor and best supporting actor prizes?! All the hard work and body aches and lack of sleep paid off splendidly on the day of the competition and we did win ALL OF THE AWARDS (except technical but that's all cool). 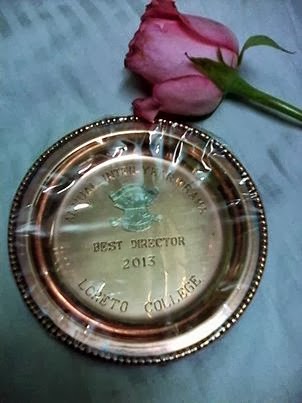 All the years of winning academic prizes (nerd alert) have not made me as happy as getting this, which I got along with my co-director Garima. 21 is going pretty great so far :)

2) Charlie Hunnam dropped out of the 50 Shades movie. Hehehehehehehee. Yeah, this movie is totes going to happen.

3) Speaking of the "other" sex movie that I can't seem to quite make up my mind about, Nymphomaniac has released possibly my favourite character posters of all time. I love it. I love it for the same reason I love the opening scene of Marie Antoinette. I think von Trier is daring us to mock him and it is awesome. Just look at those faces. He and the film's publicity team totally know what people think the film will be like and they're giving it to them. LET THERE BE PUN-Y HEADLINES!

4) Matt Smith has officially stepped down as the Doctor *sniff* and is now going to play none other than Patrick Bateman in the American Psycho musical. This leaves me with conflicted feelings because as happy as I am for Smith and have full faith in his acting and singing abilities, an American Psycho musical just sounds like sacrilege of the highest kind. Like superior business card + dinner reservation at Dorsia X 100000000 BAD!!! Why are they making this musical at all? Apparently there's some song where people gyrate about brands or something. What?! But still, go Matt Smith!! :/ :/

5) One of my most anticipated films currently in production has a release date now. The Fault in Our Stars, the film based on John Green's amazing novel, starring Shailene Woodley and Ansel Elgort will release on 6th June, 2014. I am super duper excited for this film. In related news, the director of last year's beautiful The Perks of Being a Wallflower, Stephen Chbosky and the writers of The Spectacular Now (which stars Woodley) and (500) Days of Summer, Michael H. Webber and Scott Neustadter will team up to make While We're Young. This is based Adena Halpern's book 29 about a woman in her seventies who gets to become to her twenty-something self for one day. It will star Emma Watson who was in Perks. I think it sounds amazing. These are a group of extremely talented people who are more than capable, as we have seen, of showing incredible stories onscreen. I am looking forward to the movie a lot.

6) Benedict Cumberbatch is all over the place! He was voted Sexiest Male Movie Star by Empire Magazine (Miss Watson got the title in her sex). His interview on Reddit was awesomesauce. I mean, he talked about his, Matt Smith's and Hiddles's cheekbones! If I ever write a book on bone structure, those three will be part of the Holy Trinity of Cheekbones (I'm a little obsessed with cheekbones if you weren't aware...). He also came on the Graham Norton Show with none other than Harrison Ford. My favourite thing though was his "Rickman-Off" with Jimmy Fallon-

7) Following the news of Elizabeth Olsen joining the cast of The Avengers: Age of Ultron as the Scarlet Witch, we now know that Aaron Johnson will play her onscreen brother, Quicksilver. I'm pretty happy about this. I like Johnson as an actor and I really hope there's a nice scene where all the male superheroes get shirtless. Well, Johnson and Chris Evans at least.

8) I know I don't usually talk about any television shows (except Doctor Who and Sherlock of course) but I have been watching a number of shows that I just feel like sharing my thoughts on. First of all, this season of American Horror Story is going to be awesomeness itself. I loved the first episode "Bitchcraft". The name alone gave me unimaginable joy but what a fantastic episode and ZOMG what a cast! Of course the older actresses, Jessica Lange, Kathy Bates and Angela Basset are on fire, but I am very pleased with the entire ensemble. My only issue with this season is the lack of Zachary Quinto who would have made it so much more sassier and beautiful. Next, there is the Vampire Diaries spin-off The Originals, which I daresay is going to surpass, well, the original. It has all the hotness, crazy twists, zingy one-liners of The Vampire Diaries minus the annoying romantic drama. WIN! I'm really enjoying it. I literally just started watching Sleepy Hollow and that too is quite an entertaining show. It reminds me of Elementary a bit, but I do like the story and Tom Mison is pretty. Another new show that I am liking a lot is Masters of Sex. I mean, Michael Sheen and Lizzy Caplan in a period setting- 'nuff said. Finally, I would just like to mention that I was really distracted by Chris Pratt's obvious fitness throughout the season premier of Parks and Recreation. PROMINENT SEXY CHEEKBONES, OH MY!

9) Stevee's back!!!!!!!! Yaayyy! This also gives me the perfect opportunity to say that Jessica Chastain's Facebook statuses are among the things that make life worth living.

10) Posters- I still haven't watched Gravity :'( But do check out these spectacular fan posters. Even though I just professed my love for the Nymphomaniac character posters, I also really adore those of American Hustle. I would actually build an altar to the Amy Adams one. The posters of The Double are supremely cool and weird and I need this movie like now. I really like Oldboy's new poster. It's interesting and fans of the original will see a lot of familiar elements. The US poster of Blue is the Warmest Colour is very pretty too. A bit of a cliche to say it, but I do really love the colours in it. Conversely, I despise the Labour Day poster. Yes, just use the one official and rather boring image of your film so far as its poster without even trying to change it a teeny bit. Gahh.

11) Trailers- The only thought that kept going through my head while watching the Charlie Countryman trailer was that Ron is in a film with Mads Mikkelsen and Hugo Stiglitz! I can't quite give a shit about anything else in it, sorry. I couldn't even watch all of I, Frankenstein's trailer, soooo... Why Aaron Eckhart, why? The full trailer of Monuments Men has more Jean Dujardin, so yaay! And the full trailer of American Hustle made me even more excited about the Amy Adams and Jennifer Lawrence. Yes, Christian Bale, Bradley Cooper and Jeremy Renner all also look great and will probably be excellent in the movie, but it's a total ladies show for me. The new trailer of The Hobbit: The Desolation of Smaug gives me hope because a) I think they *will* show Thorin as more of a dick in this one, which he was in the book, b) I am totally going to get aroused by a CGI dragon's voice in this movie. Benedict, you beauty. I really liked the trailer of Jack Ryan: Shadow Recruit because hey, Chris Pine in a suit being all action hero-y! My priorities are so sorted. I think it will be a fun movie though, so there you go.

12) Finally, I don't know how but I missed it when they announced that Henry Cavill and Armie Hammer are co-starring in Guy Richie's The Man from U.N.C.L.E. But goodness, look at the all-man gorgeousity- This turned out to be quite a hormones-driven post. Sorry about that. Byeeeeee.