Hiiii guys! I know I am the worst blogger in the world and I'm really sorry for not posting anything of late but here are my thoughts:

1) Life update/sleep-deprived rant- So the reason I haven't been blogging is because I am generally too tired to write down lucid thoughts. I mean, you guys follow me on Twitter, so you obviously know... I don't think I've mentioned this but I finally started 2nd year of college and it's been pretty hectic so far. There was the annual prize day last week and yours truly here won a certificate of effort in film studies. Yaay! I wore my grandma's silk sari, which is a really difficult thing in itself and gosh how do Indian women do it all the time(!), and took a million crazy photos with my friends because we were super bored. Next, I am directing a one-act play for the drama competition again. If you remember, this was the same competition I took part in last year when one of the actors ended up getting dengue though we don't know that at the time and she forgot all her lines and as a result everyone else forgot their lines and I was having panic attacks backstage but we still managed to bag the technical prize. This year we intend to win, well, ALL OF THE AWARDS, but first and foremost, put on a good show. Speaking of, yesterday my friend Alliya and I went to watch a play called "Colour Blind" starring Kalki Koechlin, and it was great, and then we actually got to meet her! For those unacquainted with Indian cinema, the only Hollywood actress I can think of who is most like Koechlin is Jennifer Lawrence, at least in terms of acting skills. 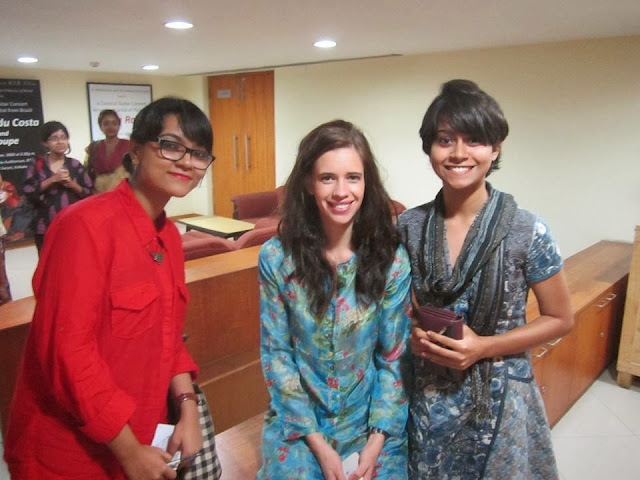 I've never met an actor before, especially someone whose work I really admire and I was very starstruck. Everyone go watch Dev D!! I had such an adrenaline rush throughout the evening that I'm pretty sure I'm going to have low adrenaline (is that a thing? It feels like a thing) for a month. So yaay, more sleepiness! Also, I waste so much time on Twitter, it's ridiculous. I would leave it were it not for all the awesomesauce conversations about 90s Bollywood or hot men. Anyways, that's all about me. To the actual film stuff now...

2) It's been ages since I saw Fargo and I have been thinking of rewatching it. Looks like I'll have to do that pretty soon because who should bag a major role in the Fargo miniseries but my fake husband, Martin Freeman! He's going to play Lester Nygaard, the character played by William H. Macy in the movie. I am very curious to see how this turns out. I'm not the biggest Coen brothers fan but I did like Fargo quite a bit.

3) The Tarzan movie is still happening! Alexander Skarsgard in playing the jungle man and Christopher Waltz has joined the project as the baddie and the producers are trying to get Emma Stone to get on board as the leading lady. I. Am. There.

4) So Oscar talk has started in full swing now. 12 Years A Slave won the main award at Toronto Film Festival and is apparently the frontrunner for Best Film. It's a little too early to start speculating about that, imo, but it looks like a lot of studio heads have gotten cold feet and many "Oscar-bait" movies have been postponed to next year. A pretty cool teaser of Foxcatcher released (see below) the day before yesterday, followed by a quite unexpected announcement of its delayed release in 2014. Joining it is Nicole Kidman-starrer Grace of Monaco, The Immigrant which has Marion Cotillard and Joaquin Phoenix, and Scorsese's The Wolf of Wall Street appears to be heading in the same direction. Just this shows how unexpected award seasons can be so people should calm down. I'd also like to note here that the previous TIFF winner was one of my two most favourite films of last year and can't wait to see if something similar happens this time.

6) Angelina Jolie's next film Unbroken, about a World War II hero, Lou Zamperini has cast Jack O'Connell as its protagonist. I suppose this is old news but I just found out about it and I'm super happy. I am a massive fan of O'Connell's thanks to Skins and I think this sounds v. promising. If you read about the life of Zamperini, the man had one obstacle after another, including a meeting with Hitler, and I am excited to see both Jolie's and O'Connell's work. The cast also includes Garrett Hedlund and Chronicle's Alex Russell.

7) Photos- The first official image of Kenneth Branagh's Cinderella has arrived and it has Lily James, who is playing the eponymous heroine and looks pretty convincing. On another fairytale movie set, a number of photos of Into the Woods, Rob Marshall's new musical, have found their way online. LOVE Chris Pine's hair. He's such a Disney prince, it's mental. Also, do see the first official image of Queen Meryl Streep being all ab fab in blue hair. Also, the first image of Fury has been released. This has a pretty amazing cast of Brad Pitt, Logan Lerman, Michael Pena and Shia LaBeouf, and I am looking forward to it.

8) Everyone has watched this, yes?

Cedric Diggory 4eva! Also that shot on the beach is like everything I want in life.

9) The Avengers: Age of Ultron has an official plot synopsis now!!!! Here it is-

"As the US Government creates a force known as Ultron, The Avengers are told they are not needed any longer. But when Ultron turns against Humanity, it’s time for The Avengers to assemble yet again for their most dangerous challenge ever."

10) Trailers- Need for Speed which looks okay but I love Aaron Paul so I'm excited for it. Jude Law-starrer Dom Hemingway looks brilliant and I think I will love it. It also has Richard E. Grant and Emilia Clarke who most oddly plays Law's daughter but whatevs. Frozen actually looks pretty fun and I love Christmas-y movies so I will wait for it. The fourth teaser of Nymphomaniac has come out and I think it is my favourite so far. Alexander Payne's next Nebraska finally has a trailer out and it looks pretty damn awesome and I think I will like it a lot. The now-delayed Foxcatcher has a pretty intriguing trailer indeed and I think Steve Carell is going to kill it. Last but not the least, have you checked out the opening credits of the new American Horror Story season? Never have nightmares been better justified. Congratulations on your everything.