AND IT'S BACK! It has been more than 2 months since my last weekly thoughts post and obviously a lot has happened since then. Here are my thoughts on the biggies, so to speak.

1) Natalie Portman dropped out of the new Fassy-Macbeth film and her replacement is none other than Marion Cotillard. I had thought that Portman would be interesting but this is just PERFECT! The amount of talent and sexiness that is going to be unleashed will be amazing. I have the Scottish play in college this year (second year, yaay!), and our professor was talking about how we will watch its various cinematic adaptations when we're done with the text, and all I could think of was how my favourite one is yet to come. I am so excited for this.

2) Sooooooo... Batfleck. My biggest problem with the casting is not even the acting thing. It's just that Ben Affleck has a super ugly chin and it will look awful in his Batman mask. The only reason I liked him in Argo was because the beard was hiding that chin. And he's also coming in the new David Fincher movie, Gone Girl. Just no. I don't want this. Make movies, Ben. Don't come in any! However, I do love the Rosamund Pike casting.

3) So they're actually making the Fifty Shades of Grey film. HOWWWWWWWWWWWWWWWWW?! Anyways, Charlie Hunnam and Dakota Johnson will star as the pervs protagonists, Christian Grey and Anastasia Steele. Apparently a lot of people are v. unhappy with Hunnam because they wanted Alexander Skarsgard instead. First of all, I don't understand why this film is having fangirl problems. I mean, it's a mommy porn book, not some great work of literature. Secondly, Hunnam is quite hot but I too agree that Askars would have been ideal casting. Christian Grey can be a very intriguing character in more capable hands than that of the author, E.L. James. As for Johnson, I am pretty certain now that more guys are going to watch this film than girls because she is plenty attractive. Though I will wait for trailers and stuff, I do think that I will watch this when it comes out just to see what the heck have they done with the material. My only hope is that they don't shy away from male nudity. Not that I want to stare at penises or whatever, but I do get wayyyyyyy more than my share of boobs on television and film.

4) James Spader is going to play Ultron in The Avengers: Age of Ultron. Ultron is obviously the baddie, and a rather powerful one at that, but director-braniac Joss Whedon is going to make some interesting changes. I am anyways very excited for this film, seeing how I am gaga about the first Avengers movie. Spader is a very cool choice, and he has some big shoes to fill after the God of Mischief (and cheekbones), Loki, played by Tom Hiddleston.

5) The Book Thief has been made into a movie starring Geoffrey Rush and Emily Watson. I am so annoyed by this. This is one of the only books that has actually made me cry and whenever I envisioned a film, I could only see an animated one. From whatever I can make of the trailer, it looks very generic. It's World War 2, it's Nazi Germany, there is a kid, there are British actors putting on German accents- it's all been seen before. One of my favourite things about the book was that it was narrated by Death and that was one of the biggest reasons I thought its film could only be made in an animated form. I don't think this version has Death as a character at all, which is a shame. The book ends with Death saying, and this is one of my most favourite last lines in a book ever, "I am haunted by humans." And I just don't see it happening in the movie. I really wish people would try and think out of the box once in a while. So glad The Little Prince will be animated (that made me cry too).

6) Other casting news- Benedict Cumberbatch dropped out of Guillermo Del Toro's next film, Crimson Peak. Shame I say! I read the plot of the film and he was probably set to play a kind of a sinister charmer-type character, which would have been perfect, what with his voice and all. No news on the replacement yet. My one-time dream husband, Josh Hartnett, is having a sort of comeback in a psycho-sexual horror TV series called Penny Dreadful. It will co-star Eva Green and is being written by John Logan who has penned films like Hugo and The Aviator. I think it sounds very cool and mysterious and I like it when actors I used to obsess over do well. Shows that I had taste :P In a similar vein, Tom Sturridge has gotten two very exciting roles. He will star in Oliver Assayas's Sils Maria, playing Chloe Moretz's boyfriend (ew), but the cast also includes big names like Juliet Binoche, Kristen Stewart and Daniel Bruhl. He will also star in Thomas Vinterberg's English language debut, the film adaptation of Thomas Hardy's Far From the Madding Crowd, along with Carey Mulligan and Matthias Schoenaerts. Two fantastic projects, methinks. Next, James McAvoy will play Frankenstein in the new Frankenstein movie. It is being directed by Paul McGuigan and Chronicle's Max Landis has penned the script. McAvoy will co-star with my favourite person in the world, Daniel Radcliffe, who is playing Igor. This is going to be a twist on the classic horror tale and seeing how these two gorgeous, blue-eyed and very talented actors have already been cast, I can't wait to see who they pick to play the monster. Mia Wasikowska has been replaced by Rooney Mara in Carol, the film based on a novel by Patricia Highsmith. It is going to be directed by Todd Haynes and also stars Cate Blanchett. I personally think it is a step down, albeit not a very big one, because I feel that the Blanchett-Wasikowska dynamic was a better one. Still, Mara is a fine actress and I just want this movie now. Finally, Sir Ian McKellen is going to play Sherlock Holmes in Bill Condon's A Slight Trick of the Mind where the renowned sleuth is made to come out of his retirement to solve a case. All I can think of is that that Sherlock is a sexy one. It's also funny to note that Condon just made The Fifth Estate with the best Sherlock to date, Benedict Cumberbatch.

6) TV news- True Blood is finally ending! I was bemoaning the fact that HBO renewed it for a seventh season, but they've announced that it is to be the last season of the once great show. It is *still* a lot of fun, but mostly because it has become so batshit crazy that you kind of can't look away. Chiefly because of this. Neil Cross, the creator of the fantastic show Luther, has reportedly written a film script for a Luther movie, that is going to be a prequel to the tv series. First of all, yessssssss! More Idris Elba for everyone! Second of all, I really hope they find some way to include Ruth Wilson's delicious Alice Morgan, even if it is cameo. American Horror Story: Coven is going to start soon and its brilliant promos have started already. Also, look at this poster. SO BLOODY PUMPED!

7) Matt Smith is going to start filming his final episode as the Eleventh Doctor aka Worst Christmas Ever this week. He's going to wear a wig which is a bit depressing because his hair was one of the biggest reasons I started watching Doctor Who in the first place. Of course there is much, much, much more to the show than that, but it was definitely a stimulus. About the episode itself, apparently the villains, or at least one of the villains, are going to be the Cybermen. I was originally very against this because they are probably my least favourite villains, in New Who at least, but seeing how incredible Smith's performance in "Nightmare in Silver" was, it maybe a good thing. Oh and for any of us who thought we will only have our heartbroken, fat chance! Our hearts will instead be snatched from our chests and trampled upon and then have a bulldozer go over them, Moffat style! Moffat's told Doctor Who Magazine: "One of the horrors of regeneration is that a certain amount of his persona alters entirely. His appetites and his enthusiasm will change. And that’s sort of what I’m writing about now in Matt’s last episode, the fact that he’s terribly aware that he’s about to be rewritten. And it’s frightening..." I am going to be suicidal this Christmas, clearly.

8) Changing tracks, THIS IS FINALLY HERE!-

9) Trailers- News has already started pouring in that Steve McQueen's 12 Years A Slave is incredible, with Chiwetel Ejiofor shining the most, and I think we can get a sense of that from the trailer. I only have seven words for The Counselor- Fassy Sex Eyes and Cameron Diaz, Hot Damn! You can read Sati's post for more details. I kind of squealed in the one of Jean Dujardin in the The Monuments Men trailer. I am looking forward to this film because I really like the plot. Fading Gigolo looks absolutely adorbs. I love Woody so much. I actually really like the trailer of Saving Mr. Banks, especially with that little "Supercalifragilisticexpialidocious" teaser. Tom Hanks and Emma Thompson are more than enough reason for me to be excited about it though. To be honest, I'm going to watch Thor: The Dark World just for Hiddles's Loki. Apparently they reshot it to add more Loki scenes so I can't be the only one. It looks quite fun on the whole too though. I'm only including Pompeii's trailer to emphasize on how dumb it looks and how much I don't want to watch it. Kit Harrington actually looks photoshopped to me. And his face is stupid. Spike Jonze's next, Her looks absolutely amazeballs. Love the cast, love ScarJo's voice, love the idea. V. excited. Dallas Buyers Club looks pretty good too, but unlike most people who are all for Matthew McConaughey in this, who *does* look brilliant, I am rooting for Jared Leto who I think is going to be even better. Also speaking of Scarlett Johansson, Under the Skin's teaser looks freaky as hell but I think she's going to rock. Lars Von Trier's Nymphomaniac is going to be something. It has released three clips so far, of the first three "chapters" of the self-professed nymphomaniac Joe's life. All are shocking and intriguing in their own way. Coming to Bollywood, Krrish 3 looks like a terrible mixture of all superhero movies. It's going to be so bad that it has to be watched with a bunch of people and be laughed at. Can't wait. The best trailer I have seen in all this while, barring Kill Your Darlings of course, is David O. Russell's American Hustle. Love the cast, the music, the look and Amy Adams most of all. This looks great and I really, really, really, want Adams to win that Oscar already.

10) Finally, as is a semi-tradition with this blog, this is me indulging in my girl-crush on Emma Watson- 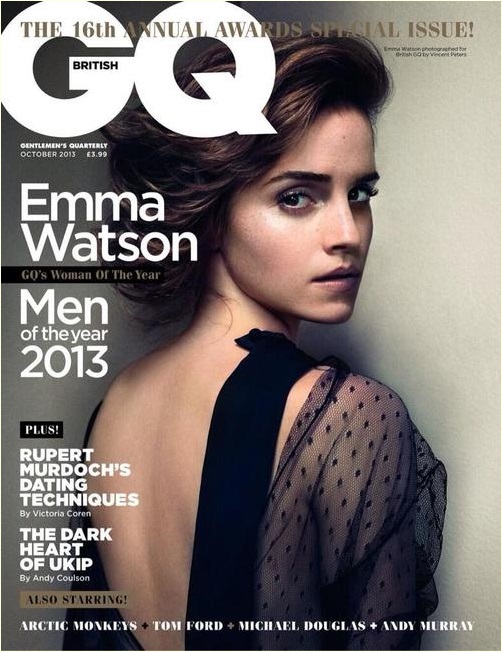 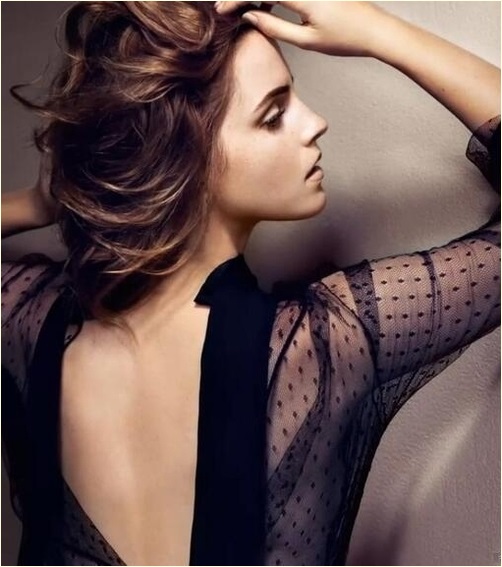 She was excellent in The Bling Ring!