“Quentin Tarantino is here, the star of all my sexual nightmares." GOLDEN GLOBES HAPPENED, BICHES! I bloody love the Golden Globes. They are always so much fun and incredibly unpredictable, which just adds to the fun. Though I respect the Oscars more (don't ask why, it's an inherent thing, like it is for everybody else), Globes is my favourite awards show and the 70th Golden Globes Awards just reaffirmed that.

1) I went to bed at around 2:30 a.m. and then woke up at 5:30 a.m. panicking because I thought I had missed them. Turns out they start an hour later and for the first time in a very long time I had to listen to modern pop music on VH1 (which was airing the show) to stay awake. It was trauma (I HATE YOU MAROON 5!).
2) And yes, I have slept for only 3 hours so I apologise for any craziness that may or may not occur in this post.
3) Though they didn't air the red carpet, my absolute favourite gown was what Lucy Liu wore. It was like something out of Marie Antoinette- 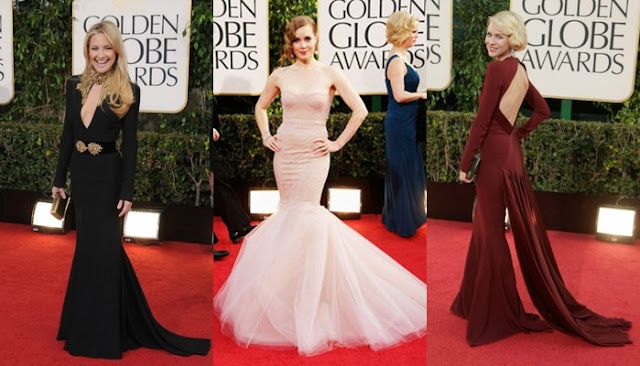 I also really loved what Kate Hudson, Amy Adams and Naomi Watts wore. They were all so dramatic.

4) Rachel Weisz's outfit was a classic example of how a good dress can go bad. She's so beautiful though.
5) Anywho, the show starts and the hosts, part-time comedy goddesses, Tina Fey and Amy Poeher kill it! So funny. Some classics-
"When it comes to torture, I trust the lady spending three years married to James Cameron." (Jessica Chastain's face here was priceless).
"Anne Hathaway, you gave a stunning performance in Les Miserables. I have not someone so totally alone and abandoned since you were on stage with James Franco at the Oscars."
“Meryl Streep isn’t here tonight. She has the flu, and I hear she’s amazing in it.”

Daniel Day Lewis being E.T. He looks like such a silver fox. I love it.

6) The first award is Best Supporting Actor and lo and behold, who should win it but Christoph Waltz! Ugh, category fraud. And Leo looked so pretty. I miss pretty Leo. Isn't Golden Globes supposed to be partial to like gorgeous royalty, wtf?

7) Miss and Mr. Golden Globe were children of Clint Eastwood and Michael J. Fox respectively. "You know what, Taylor Swift? Stay away from Michael J. Fox‘s son." Fey threatens later. Lulz.
8) Oh then the president of HFPA comes and hits on Bradley Cooper. Poor Cooper.
9) I know it's trivial to speculate but I think Cooper and J-Law are totes going out. It's all that awesome dancing and staring into the eyes.
10) They got the real Tony Mendez to announce Argo's Best Picture nomination. So cool. Oscar's never do this.
11) Ang Lee looks like such a nice, happy person. And I hate Suraj Sharma. I want to be there!!
12) One of my favourite awards of the evening- Adele won Best Original Song for "Skyfall" and hi-fived James Bond and gave an adorable speech and Taylor Swift was left seething. It's okay though. She will probably write a song about it.

13) Benedict Cumberbatch did not get an award AGAIN! And he lost to Kevin Costner who sounded really sad and stuff.

LOOK AT HIM! JUST LOOK! GIVE HIM A BLOODY AWARD!!!

14) Oh then Bill Clinton comes to announce Lincoln's nomination, which was so not fair. He got a standing ovation. I once went to some function where he was the chief guest. He wore a very nice suit. "That was Hillary Clinton's husband!" Leslie Knope speaking through Amy Poehler.
15) At some point Homeland won a ton of awards and Claire Danes's make-up was really sexy. Also Maggie Smith won so yaay!!
16) Man, the commercial breaks were torture. The ads alternated between some Michael Jackson memorial thing with people crying, bloody Taylor Swift promoting her new album and Aishwarya Rai's Loreal commercials, in which she says "Now I am a mother with gorgeous hair." OH MY GOD SHUT UP BICH!
17) Btw, "bich" is my new thing now. Yes, I decide what stupid fads I want to follow.
18) Kristen Wiig and Will Ferrel presented Best Actress Comedy/Musical and were hilarious to everyone except Tommy Lee Jones, who wins the Best Expression of the Golden Globes Award.

He is the Grumpy Cat in human form.

19) Jennifer Lawrence won and she was really funny and sweet. Her "Oh, what does it say? I beat Meryl" was taken from The First Wives Club, so no, it was not a failed joke. She is smarter than us all.
20) Then Anne Hathaway won and she desperately has to work on her surprised face, because you can see through it very easily. Almost makes me wish that when she got up, someone else's name got called out instead. Her thanking Sally Field was really lovely though.
21) Quentin Tarantino won Best Screenplay, making it another favourite win of mine. He was so, in the words of Adele, "pissed" that it was very entertaining to watch.

22) Sylvester Stallone and Arnold Schwarzenegger presented the Best Foreign Film award (duh?) and all I wanted was a fight. Of course Amour won and Michael Haneke accepted the award from fellow Austrian, Schwarzy (are he and Schwarzy  gonna become bezzies now? Methinks 'twas meant to be).
23) Oh I really wanted Anne Hathaway and Claire Danes to have a jazz freakout together. That would have been fun.
24) Sacha Baron Cohen came with a drink in his hand and wittily insulted most of his Les Mis co-stars and also made a joke about Anne Hathaway's unfortunate wardrobe malfunction, and then continued to present the Best Animated Film award. Again, duh? Still, Brave won, so GO PIXAR! Maybe I should get a Pixar tattoo...
25) Lena Dunham won the Best Actress Comedy in television and was really sweet and thanked all the other nominees, but Tina and Amy were not amused. Also, this-

26) Robert Downey Jr. came to introduce Jodie Foster and give her the Cecil B. Demille award. Someone needs to give him an Oscar just for being himself, because he is unparalleled in his awesomosity.
27) I love Clarice Starling to death. One of my absolute favourite characters and performances of all time. But oh my god, I don't know if it was the lack of sleep or what, but I could not follow anything Jodie Foster said in her acceptance speech. She was burning through a lot of topics really fast. There was something about coming out but then it wasn't, and Honey Boo Boo and reality TV and her mother and some dog whistle and by the end of it, it sounded like she was going to shoot herself on the spot. People in the audience were crying. I was very lost.
28) Mel Gibson- BAHAHAHAHAHAHAHA!!
29) Ben Affleck won Best Director, which was brilliant. Argo Fuck Yourselves, Oscars.
30) Hey, hey! Ryan Gosling wasn't there :( And they never showed Cumberbatch again. Eddie Redmayne makes me want to howl though.
31) Girls also won Best Comedy show. Yaays! Season 2 starts today!! Eeeeep!!!
32) My absolute favourite win of the show was Hugh Jackman winning Best Actor Comedy/Musical, beating the frontrunner, Cooper. I was watching his Oscar's opening number just yesterday and I love him so. He was fantastic in Les Mis.
33) Les Mis also, very shockingly, won Best Film Comedy/Musical instead of the favoured and far more superior Silver Linings Playbook. Anne Hathaway is getting slightly annoying.
34) “Our next presenter is so handsome, he makes young George Clooney look like garbage.”
“Welcome to the stage, middle-age George Clooney.” - best intro ever.
35) Unfortunately, Clooney did not make any jokes about golf clubs or anything. He did poke fun at Ben Affleck though (who had forgotten to thank him in his speech :O). Jessica Chastain won Best Actress Drama and was wonderful, although I would have much preferred to see Rachel Weisz take home the Globe. And Daniel Day Lewis won Best Actor Drama, hence making the Best Actor race the most boring category of the year.
36) Oh Joaquin Phoenix was totally there. Maybe he likes the Globes more than the Oscars. Maybe it was all the alcohol.

37) Argo won Best Picture Drama! Woo hoo! I wish Drama and Comedy were kept on the same pedestal though. The preference of one to the other is depressing, literally. Anyways, I hope this happens at the Oscars as well.
38) "Good night! We’re going home with Jodie Foster!”