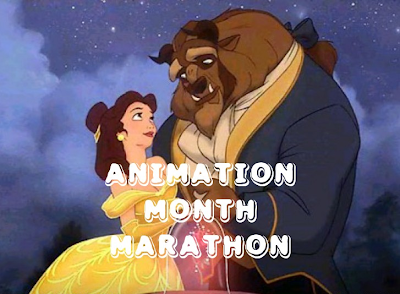 So I decided to go on an Animation Month Marathon, where I would only (mostly) watch animated films this entire month. I have started with Disney (again mostly), and will soon move on to anime. Also I will first tackle all the unseen movies in my list, and then as many rewatches as possible. 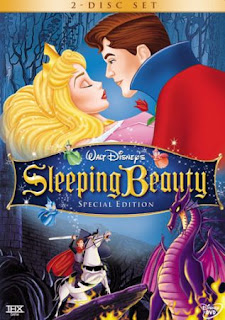 1) Sleeping Beauty (1959)- This was a bad film to start with. The main character Aurora literally has nothing except her royal title. She was a princess, which is why the fairies give her her beauty and singing talents. I just could not accept it from the starting itself, because even though Disney is known for its one-dimensional characters, this was too much. If she had not been rich, she would have been ugly and unskilled. Okay I was over-thinking it a bit, as my friends pointed it out, but I refuse to accept the reason "it's for kids". Kids are smart, and this was stupid. I loved Maleficient though, and her need to create havoc for no reason whatsoever. She reminded me of The Joker- total anarchist. Also the three fairies were awesome, although I don't know how they lived like humans for sixteen years, seeing that they were terrible at housework without magic.
I would have been so much happier if the film was outwardly about the fairies or Maleficient or even Prince Phillip. I had to look at Sparknotes to see why Aurora was significant, and it's because she is passive and pure. What the hell?! And the message was "to believe in true love". That's just daft.
The animation was gorgeous, especially towards the end. Also it has possibly my favourite Disney song- "I Walked With You Once Upon A Dream". 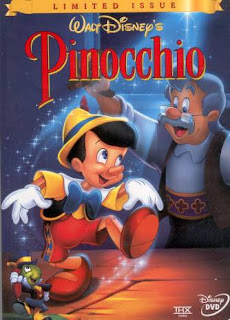 2) Pinocchio (1940)- I was already in love with Jiminy Cricket when this had started. Also with the intricacies of all the things in Geppetto's woodshop.
Though this film is very colourful, there are a lot of deeper and darker aspects of it. I have heard and read a lot about how sinister Disney films tend to be, and Pinocchio definitely had elements of that. I love how Pinocchio decides to become an actor instead of going to school. Or the fact that he gets taken, along with all the other unruly boys in his village, to Pleasure Island where kids wreak havoc and smoke and drink and gamble. I could see a very grown-up message being given, which was very pleasantly surprising to see in a Disney film.
But the downfall of this film, for me, is the last act, where Geppetto has been swallowed, really randomly, by a ginormous whale and Pinocchio and Jiminy Cricket have to go save him. Although visually it was very impressive, with the underwater shots and all the action revolving around the whale chasing them, it just felt so out of place. 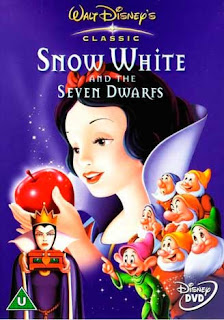 3) Snow White and the Seven Dwarfs (1937)- Until I saw Sleeping Beauty, I have always hated Snow White the most out of all the fairy tale heroines because she seems so thoroughly useless. But I actually really enjoyed this movie, and a huge reason for it was how much I love Enchanted, because Amy Adams's Giselle is almost exactly like Snow White, but with a lot more guts obviously.
The Wicked Queen was cool, and I think her transformation is one of the best Disney scenes I have seen so far. The dwarfs were cute, and Snow White, in all her bimboness, was rather sweet.
The animation again was brilliant. The ending was so ridiculous, it was funny. 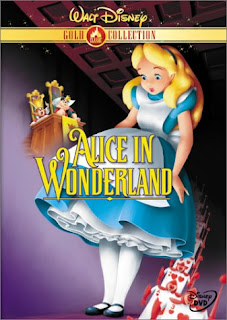 4) Alice in Wonderland (1951)- I still think I should have been high while watching this. This book itself is so crazy, that only a crazy adaptation would have done it justice. This Disney version comes pretty close.
I loved Alice in all her haughtiness and confusion. The animation was absolutely stunning. I loved the groovy lights in the forest, and the gorgeous flowers, and the patterns and designs of the Red Queen's army.
It was really enjoyable, though I did feel a bit empty afterwards. It's not the film's fault exactly, but the story could not keep me as vested as the animation because it is so mental. That is the only sort of flaw in this excellent adaptation.

5) Fantasia (1940)- Now this film was just mind-blowing. I could have never imagined a Disney film to be like this. It is so wildly ambitious and incredible- using music to create images. Such a wonderful concept, executed and brought to life so beautifully by Walt Disney. I mean if anyone was to now ask me why Walt Disney is a genius, I will tell them to watch this film.
There are eight parts in this which explore this concept. My favourites were "Tocatta and Fugue in D Minor", "The Pastoral Symphony" and the last part, "Night on Bald Mountain" and "Ava Maria". I am not that musically knowledgeable, especially in case of classical stuff, but with the images and the ideas, I was brought to tears a couple of times during this film.
This film has joined the likes of 2001: A Space Odyssey and The Tree of Life as one of the most ambitious films I have ever seen. Hell, I am convinced that Terrence Malick watched it for inspiration! It is an absolute must-see for any film lover. Consequently, I am of the belief that this film is not for children, at all. 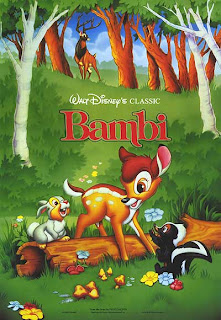 6) Bambi (1942)- This film is just adorable. I loved the animals and the forest and everything. It is very simple and very enjoyable. A tale of growing up, of loss and love, of man versus animals- all of that, but shown with so much love and simplicity, that I was left very impressed.
I loved all the baby animals and the process of everyone, especially Thumper, teaching Bambi about the world. This film is infamous for killing off a character, and I guess as a kid it would have affected me a great deal. My favourite part of the film was the danger at the end. I was blown away by the spectacular animation at that point. It looked like a painting. It was so beautiful and so terrifying at the same time. 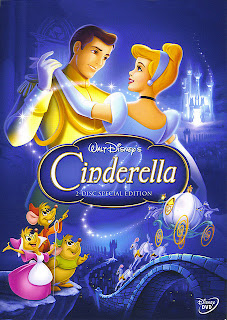 7) Cinderella (1950)- Cinderella is, I think, the most average a Disney film can get. The story is exactly what we all know, nothing happens out of the ordinary, and there is a nice happy ending.
There were a lot of talking mice in this, which was cute at first, but highly annoying later. I don't really like the way these films require other characters to fill up the time and space, because the protagonists are so dull. 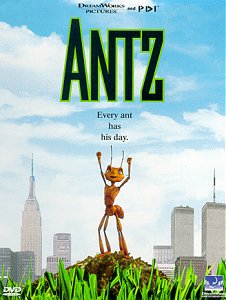 8) Antz (1998)- I took a little break from Disney and decided to watch a non-Woody Allen Woody Allen movie.
I love all the Woody-ness this film embraces- the psychoanalyst sessions, the stuttering, the need for self-worth, the confused yet brilliant female protagonist etc. Of course, this film is more hopeful and action-filled than any Woody Allen film I have seen, but it was fun. I liked the concept of social changes in an ant colony. I like the underdog, and the fact that he was an ant and voiced by my favourite filmmaker, made me like him so much more.
It isn't as brilliant as the really good Dreamworks films are, but very enjoyable still. 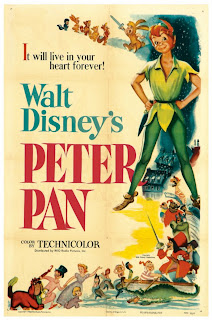 9) Peter Pan (1953)- Unlike Alice in Wonderland, I absolutely adore this tale of "the boy who never grew up". And so it was a bit disappointing when many of my favourite aspects of the play, like Tinkerbell being brought back to life and Peter being more needy and slightly vicious, were removed.
This was the only Disney film I have seen that properly shied away from the darker elements, so that was unfortunate, since I do really enjoy the story.
I loved the Lost Boys and Tinkerbell in this. 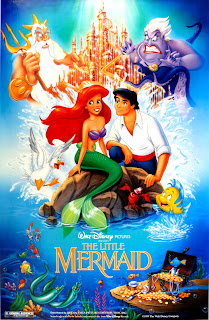 10) Little Mermaid (1989)- This film is believed to be the beginning of the Disney Renaissance. I thought it was really beautiful. Ariel is probably the best-looking Disney princess, with her perfect red hair and her giant blue eyes, and she was really sweet. I just think her story was terrible. The actual Hans Christian Andersen fairy tale is much more tragic, and I can understand why it was given the happy-treatment, but if you really look at it, Ariel gives everything up to get Prince Eric, which would be a lovely concept, if he did the same. And Prince Eric was actually nice, unlike the other princes who are creeps. But the story is such...
Still I really liked it. Absolutely loved Ursula, who I think is going to be my favourite Disney villain. She was so fabulous. 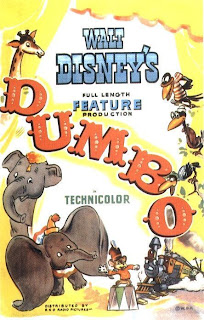 11) Dumbo (1941)- God this was depressing. Even with the happy ending and the intention of turning things around for the studio after Fantasia had been a commercial bust, this was just such a sad tale.
Dumbo is probably the cutest Disney character, along with Bambi. But his ostracization because of his big ears, and his mother being taken away- it was just so sad! The other elephants were like the meanest characters ever.
This was not at all fulfilling, but it has one of the most surreal sequences that I have seen in cartoons, so that was cool.

With the exception of these, I saw a great deal of Pixar shorts as well. My favourites were Day and Night and Presto.

See you next week :D