"Voilà! In view, a humble vaudevillian veteran, cast vicariously as both victim and villain by the vicissitudes of Fate."- Hugo Weaving as V Don't you just love this man? And his voice! Maybe it's because I can't help but love villains and anti-heroes but secretly I have always wanted the Hugo Weaving character to win.
A look back...

Rex the Male Sheepdog- You and I are descended from the great sheepdogs. We carry the bloodline of the ancient Bahou. We stand for something! And today I watched in shame as all that was betrayed. Elrond: Strangers from distant lands, friends of old you have been summoned here to answer the threat of Mordor. Middle Earth stands upon the brink of destruction, none can escape it. You will unite or you will fall. Each race is bound to this fate, this one doom. Bring forth the ring, Frodo.

Noah the Elder: So, you dare come back? 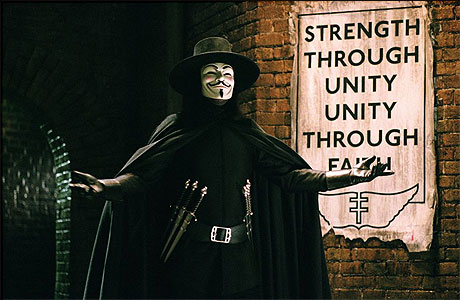 V: Who? Who is but the form following the function of what and what I am is a man in a mask.
And finally... Agent Smith: Why, Mr. Anderson? Why do you do it? Why get up? Why keep fighting? Do you believe you're fighting for something? For more than your survival? Can you tell me what it is? Do you even know? Is it freedom? Or truth? Perhaps peace? Yes? No? Could it be for love? Illusions, Mr. Anderson. Vagaries of perception. The temporary constructs of a feeble human intellect trying desperately to justify an existence that is without meaning or purpose. And all of them as artificial as the Matrix itself, although only a human mind could invent something as insipid as love. You must be able to see it, Mr. Anderson. You must know it by now. You can't win. It's pointless to keep fighting. Why, Mr. Anderson? Why? Why do you persist?
And what is to come... The Red Skull in Captain America.


Okay so Elrond isn't really a "bad guy" but he did keep Aragorn and Arwen apart.


Now I have been meaning to make a favourite villain/ant-hero playing actors list. It was meant to be just a list, but I think this way is better. Little heads up- 3 of the actors are in the Harry Potter series.
Posted by Nikhat at 4:15 pm