"It seems that envy is my sin." ~ Kevin Spacey as John Doe To be honest, though I was dying to see The Social Network back when...and was pretty sure that it will be amazing (and it is), the moment the words- "Executive Producer Kevin Spacey" came onscreen, my belief was complete. Looking at his filmography now, I notice I haven't seen that many films of his (L.A. Confidential included- my bad), but the ones I have seen have left an indelible impression on me- mostly because he has played some of my favourite anti-heroes and villains.

John Williamson: You've got a big mouth... now I'm gonna show you an even bigger one. John Doe: Wanting people to listen, you can't just tap them on the shoulder anymore. You have to hit them with a sledgehammer, and then you'll notice you've got their strict attention.

'Verbal' Kint/ Keyser Soze: After that my guess is that you will never hear from him again. The greatest trick the devil ever pulled was convincing the world he did not exist. And like that... he is gone.

Lex Luthor:  Gods are selfish beings who fly around in little red capes and don't share their power with mankind. No, I don't want to be a *god*. I just want to bring fire to the people. And... I want my cut.
﻿And finally... 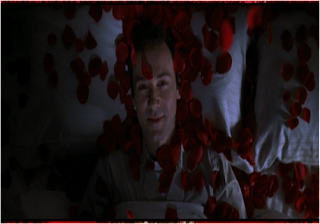 Lester Burnham: My name is Lester Burnham. This is my neighborhood; this is my street; this is my life. I am 42 years old; in less than a year I will be dead. Of course I don't know that yet, and in a way, I am dead already.
This was part 2 of Favourite Actors who play Villains/Anti-heroes.﻿
Posted by Nikhat at 12:40 pm