"The only greatness for man is immortality" ~James Dean 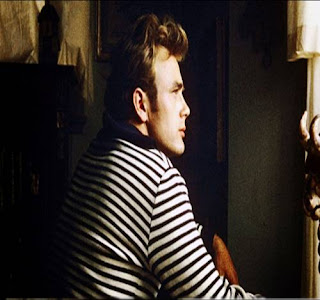 "James Dean made just three pictures, but even if he had made only one he would still be the greatest male star of the ’50s. The pictures are East of Eden, Rebel Without a Cause, Giant. Just the titles evoke epic visions, and all three films live up to their titles, constituting a three part heroic poem on atomic age youth, its beauties and its obsessions…James Dean was the perfect embodiment of an eternal struggle. It might be innocence struggling with experience, youth with age, or man with his image. But in every aspect his struggle was a mirror to a generation of rebels without a cause. His anguish was exquisitely genuine on and off the screen; his moments of joy were rare and precious. He is not our hero because he was perfect, but because he perfectly represented the damaged but beautiful soul of our time.”
- Andy Warhol
Happy Belated Birthday James Dean.
Posted by Nikhat at 2:22 pm