The Months that were February, March and April

Welcome to another unnecessarily massive post because I was too lazy/busy with stupid exams to do one each month! All I want to say is that I watched an obscene amount of TV for someone giving her final college exams. 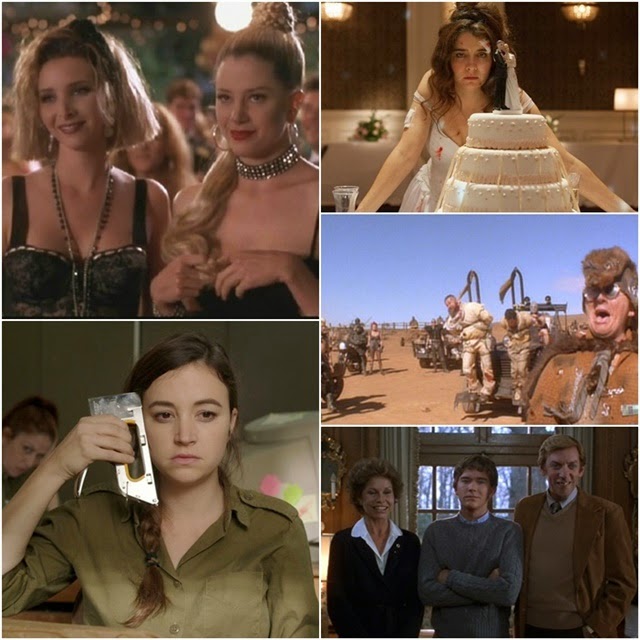 1) Beyond the Lights- I really liked it. It could've been totally cliched but it felt very raw and real.
2) The Disappearance of Eleanor Rigby: Him- God, James McAvoy is so underrated.
3) The Disappearance of Eleanor Rigby: Her- The best one and I really liked this order.
4) The Voices- It's kind of quirky but then it gets too depressing. Ryan Reynools is really good.
5) Chariots of Fire- I liked it a lot, surprisingly. I'm not one for sports movies generally.
6) Ordinary People- I really liked it although it's annoying that Timothy Hutton got an Oscar for this role and Logan Lerman got nothing whatsoever for Perks of Being a Wallflower.
7) Bananas- Super fun.
8) The Liability- Watched it for Jack O'Connell. It was pretty okay.
9) Roy- Worst 2015 movie so far.
10) Spanking the Monkey- Cannot believe that David O'Russell made this. Loved it.
11) A Matter of Life and Death- This was my February Blind spot which I didn't write on... yet. I loved it.
12) In the Heat of the Night- I don't think it's aged very well even though its message still applies, sadly.
13) Fifty Shades of Grey- Unintentionally hilarious. Johnson's pretty decent.
14) 3 Women- I didn't know this was going to be so surreal.
15) Wild Tales- Awesome. Best kind of humour ever.
16) Kingsman: The Secret Service- So much fun! The weird princess bit at the end notwithstanding, it's my favourite 2015 film so far.
17) Ugly- So unnecessarily bleak.
18) Charade- Fun!
19) Zero Motivation- I loved it. More films like this, please.
20) The United States of Leland- It was kind of terrible. Not all Gosling movies are good :/
21) The DUFF- I liked it a lot. Mae Whitman rules!
22) Romy and Michele's High School Reunion- I don't know why it took me so long to watch it. It's fucking brilliant!
23) All Good Things- All the talk about The Jinx got me to check it out. Both the Gos and Kirsten Dunst were v. good.
24) Focus- The leads were great. The film, not so much.
25) Cinderella- Absolutely lovely.
26) Thirteen- Wowsers, that was dark.
27) A Girl Walks Home Alone At Night- It got a bit slow in parts but I really liked it. Totes dressing up as the Girl at some costume party.
28) Office Space- Meh.
29) Dum Laga Ke Haisha- A really sweet and simple Bollywood film.
30) Mad Max- It's like a lame origin story.
31) Mad Max: Road Warrior- THIS IS WHAT I'M TALKING ABOUT! SO GOOOOD!
32) The Cook, the Thief, His Wife & Her Lover- I don't know why but I thought this was going to be a "light" comedy. Yikes!
33) Step Brothers- Laughed a lot.
34) It Follows- It wasn't that scary. I actually went with my dad and he fell asleep during the movie and he hated it. I liked it, especially the music and the way it's shot.
35) Fast and Furious 7- It's fun as long as no one talks.
36) A History of Violence- I've watched it in parts but never completely. Really good.
37) O Brother Where Art Thou?- I'm not the biggest fan of country music so that got a bit annoying but I liked it.
38) The Avengers: Age of Ultron- First day, first show! I was going to review it as soon as I came back home but my brother forbade me till he had watched it and now I kinda don't want to anymore... I still might but in short, I liked it a lot but it had issues.
39) Adult Beginners- I thought it was like a lesser The Skeleton Twins.
40) Lost River- Weird as fuck but not completely terrible. Never going to forget Ben Mendehlson dancing ever. 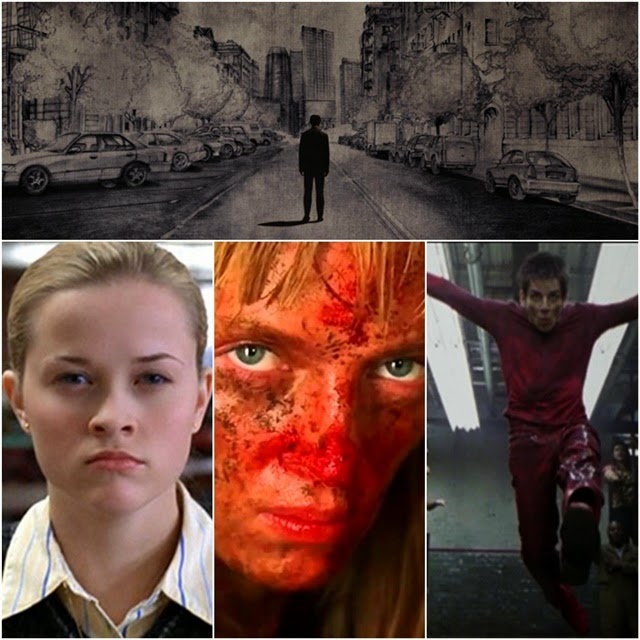 1) Stoker- Margaret went Goode crazy and so I had to rewatch this *fans herself*
2) Run Lola Run- For our 90s episode. Still one of the craziest, coolest films I have ever seen.
3) La Haine- 90s episode. Cute, adorable Nino Quincampoix from Amelie made this. Like WOAH!!
4) Can’t Hardly Wait- 90s episode. Fun!
5) Election- Tracy Flick is such a fascinating character. I kinda hate her but I also have mad respect for how passionate she is.
6) Casablanca- Valentine's Day tradition.
7) Bridget Jones’ Diary- Ditto.
8) Chungking Express- New addition to Valentine's Day tradition.
9) The Breakfast Club- For it's 30th anniversary. I'm so scared that one day I will start identifying with Vernon :/
10) Kill Bill vol. 1- It's been too long since I had watched this. I should make a Withrow-esque "__ Things I Love About Kill Bill that No One Talks About" list because god, I adore this film.
11) Kill Bill vol. 2- Same.
12) Captain America: First Avenger- After watching Agent Carter, I got really thirsty for my favourite Avenger (if we don't count Peggy Carter herself)
13) The Avengers- See.
14) Captain America: Winter Soldier- Seeeeee.
15) Drive- It's been forever since I watched this too. I think it's kind of a perfect movie.
16) Zoolander- After the Zoolander 2 announcement, this had to be revisited.
17) Selma- Amazing
18) Star Wars episode IV: A New Hope- I think a huge reason why I can't ever love Star Wars (or the original movies at least) is because Luke bores the living shit out of me.
19) Star Wars episode V: Return of the Jedi- I kind of really like Lando.
20) Mommy- I cried so much this time. It broke me all over again.
21) The Heartbeats- There is maybe too much slo-mo but who cares if it all looks so gorgeous?
22) I Killed My Mother- Anne Dorval is aging like fine wine, isn't she?
23) Scott Pilgrim vs the World- Another one I hadn't watched in forever. I will never get bored of this film
24) (500) Days of Summer- Is the ending a happy one? Like really?

TV shows: (I'm skipping favourite quotes because there are so many) 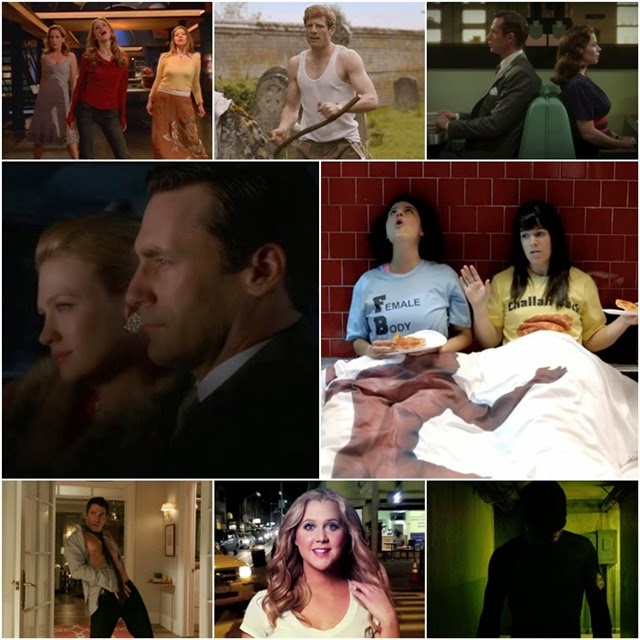 1) Mad Men, seasons 1-6- I started watching this the day before my exams started because, duh. It's fantastic, of course. I am sorry that I waited so long to start it.
2) Buffy the Vampire Slayer, season 6 and 7- These aren't the greatest seasons but I love this show so much. For one thing, it has one of the best episodes of all time, "Once More With Feeling".
3) Grantchester, series 1- Anna lured me in by sending me links of the hot James Norton. He plays a priest in this show. What priest looks like that? (he's the one in the 2nd pic on the 1st row).
4) Daredevil, season 1- Really, really good. I especially loved the fight scenes (the hallway fight, amirite?) and the way the hero and the villain are so similar. a) Favourite episode: "Speak of the Devil". I liked how much we could feel Matt's mortality in this. Also, the two meetings between Matt and Fisk were both brilliantly handled. b) MVP- Though both Charlie Cox and Vincent d'Onofrio are excellent, I have a soft spot for Rosario Dawson's Claire. I wish we had more of her (one of the biggest flaws of the show for me).
5) The Mindy Project, seasons 1-3- They cancelled it, those assholes! Anyways, I really enjoyed it. An Indian woman who eats a lot and has a thing for hot, white guys and romcoms? It sure does sound familiar... Also, Chris Messina dancing is my sexual orientation from now on.
6) Agent Carter, season 1- SO FUCKING AWESOMESAUCE! I love it. I love the setting, the action, the banter and of course Peggy. Peggy is the badass goddess of my dreams. a) Favourite episode: "A Sin to Err" because we finally get Peggy showing those misogynistic assholes in SSR what a badass goddess she is. b) MVP: I loved James D'Arcy's Jarvis but this show belongs to Hayley Atwell's Peggy. She was already one of my favourite parts of Captain America: The First Avenger and in this show, she balances the action, the comedy and the emotions equally well.
7) Inside Amy Schumer, season 1 and 2- This show is the bestest thing ever and Amy Schumer is my god.
8) Unbreakable Kimmy Schmidt, season 1- Really really fun. "Pinot Noir" is actually my ringtone. a) Favourite episode: "Kimmy Goes to Court" simply because who would have thought that *that* person is the father. b) MVP: As enjoyable as Titus Burgess and Jane Krakowski are, Ellie Kemper's Kimmy is my favourite. Her optimism is infectious even though my cheeks hurt just looking at her smiling so much.
9) Pushing Daisies, season 1- I suddenly had the urge to rewatch it. Watching season 2 is too painful because of how the show just ended after that :'(
10) The Jinx: The Life and Deaths of Robert Durst- After seeing the way people were losing their shit over this on social media, I had to check it out. That ending, man. WOW!
11) Broad City, Season 2- The show that is my life. Season 2 was actually better than 1. How did they do that? a) Favourite episode: "Knockoffs". We meet Ilana's mom, go underground designer knockoff bags shopping with them, deal with loss of a loved one, finally have Abbi and Jeremy go on a date, have Abbi and Jeremy do "pegging", see two people have a serious conversation about relationships while one of them has a dildo strapped on to their crotch the entire time- all of this in like a half-hour episode. It's incredible. b) MVP: I can't choose between Ilana and Abbi so this one is for Paul Downs' complete devotion to both Trey and his porn star alter ego Kirk Steele.
12) Fresh of the Boat, season 1- This is such a fun show too. I especially like the 90s aspects of it. And how totally adorbs Evan is. a) Favourite episode: "Very Superstitious" Jessica is my favourite part of the show so seeing her go nuts over the number 4 is hilarious. Also the freak out Louis has after removing his jade locket. b) MVP: Constance Wu is killing it as Jessica. I can watch her all day.
13) Better Call Saul, season 1- I have a weird feeling I might end up loving this more than Breaking Bad. Mostly because I feel so much worse for poor Saul/Jimmy. Really excellent show in its own right. a) Favourite episode: "Pimento" because of that long time coming confrontation between Jimmy and Chuck. Heartbreaking stuff. b) MVP: In Breaking Bad, I always thought of Saul Goodman as someone really sleazy but now I just feel the pathos of the character which is so beautifully brought out by Bob Odenkirk. He's doing truly wonderful work. 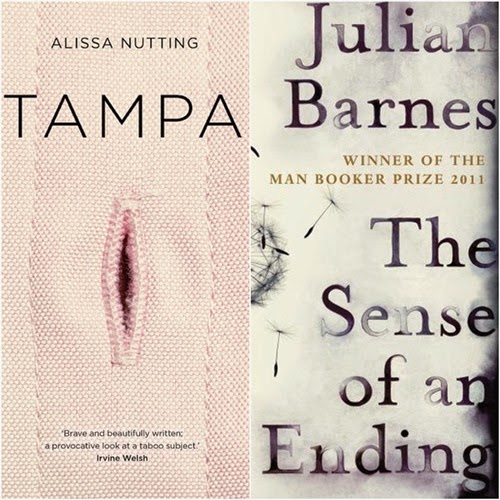 1) Tampa by Alissa Nuting- Oh this book is so filthy but so fun! I enjoyed it to bits. It's a blast being in the head of someone so heinous.
2) The Sense of an Ending by Julian Barnes- Ironically, it's the ending I didn't like. Really beautifully written otherwise.