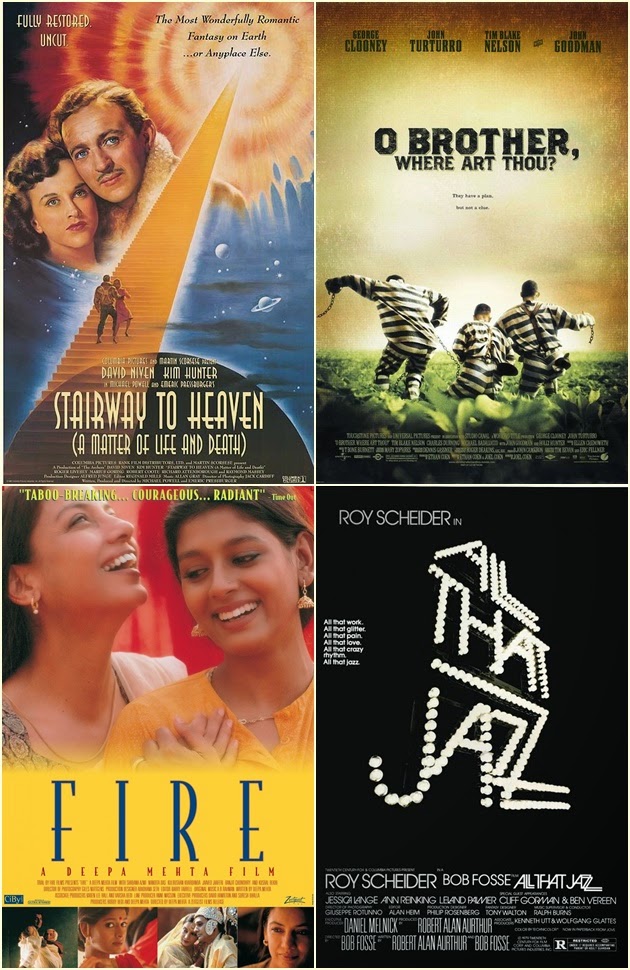 Yes, I know I am terrible. All I can say is that it is actually a real shame that I haven't been able to write about (or even watch) my Blind spots in the past three months because I had a lot to say about them (or for at least three of them). Enjoy, I guess. February- A Matter of Life and Death (Dir: Michael Powell and Emeric Pressburger, 1947)

Basic plot: Before his plane crashes, British Air Force pilot Peter Carter contacts an American radio operator June and talks to her for a few minutes. This crash was meant to take his life but Conductor 71, who was supposed to take him to the "Other World", missed him due to a fog and Peter washes up on the shore where June finds him and they fall in love. This causes a great deal of confusion in the "Other World" and they try to get Peter back but he refuses because he now has a reason to live for. His "hallucinations" get treated by a friend of June's, Dr. Reeves, who becomes Peter's attorney in the appeal for his life.

Oh I loved this film! I wanted to write about it on Valentine's Day but yeah, that didn't really happen. I love movies in which something as conceptual as love being stronger than death is explored not only in terms of drama but intellectually as well. It was beautiful to look at- the "Other World" was black and white, with huge halls and never-ending stairs and colossal statues, and earth was in Technicolour and as vibrant as other Powell-Pressburger films. I just felt so moved while watching it. The film also explores trauma suffered by soldiers and it keeps the visions Peter has ambiguous so we don't actually know if they happened or not. I think it depends on the person watching and I like to believe that they weren't simply hallucinations of a damaged mind but something real- that a person's soul matters so much that there is a humongous trial held for it and that a genuine tear born out of love can save that very soul.

It wasn't perfect however. For most of its running time, I was sure that I will put this film in my top 100 but then something really odd happened. During the trial, there is a huge argument about which country is greater- England or USA. I can see how this would have worked when the film came out but it just made it tedious to watch now. It's the only thing in the film that makes it seem dated and it's especially jarring because everything else about it is so timeless.

Coming to the actors, I thought David Niven as Peter and Roger Livesey as Dr. Reeves were both the best. I saw Tilda Swinton of all people praise Livesey in an interview a few months ago and I can see why. He was really wonderful in the movie.

This is my third Powell-Pressburger film and it's my favourite so far.

Basic plot- Based on Homer's The Odyssey, the film follows three escaped convicts in 1930s Mississippi who try to find their hidden treasure and in their journey, they record a hit song, meet a bank robber, have one of them turned into a toad, save their black friend from a KKK meeting, reunite another one of them with his family, and stay out of the clutches of a relentless devil-like policeman who is after them.

While I wouldn't call it a dud exactly, this is my least favourite Blind spot entry so far. Maybe it's due to that fact that I haven't read The Odyssey, or watched Sullivan's Travels (which is another of its inspirations), or how much I hate country music, or probably a combination of all of this that made the film kind of a blah watch for me. This film is more or less a musical so the songs played a huge part in it and also in how I felt about it. Sure, it was funny seeing George Clooney sing and dance, or just the faces that John Turturro makes, but it wasn't enough. I just didn't care for it.

One thing I will say is that the film is absolutely gorgeous to look at and even though I didn't appreciate the story, I thought it was very well-made.

The Coen brothers are a sort of hit and miss for me. I do however tend to like their films more upon a rewatch and that might happen with O Brother Where Art Thou? in the future, though I have a feeling that the country music is going to be a real obstacle even then. 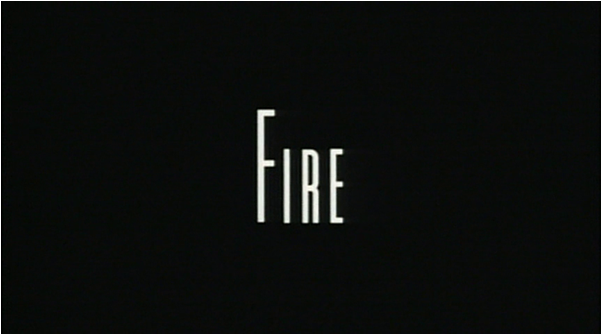 Basic plot- For 13 years, Radha has lived with a husband who has purged desire from his life, calling it the root of evil. His younger brother, who is in love with someone else, is forced to marry Sita, a free-spirited girl who wants love but finds none in her marriage. Living together in a house, neglected by their husbands, Radha and Sita find love and desire in each other.

While watching this film, all I could think of was the Whitman quote Robin Williams' character quotes in Dead Poets Society: "most men live lives of quite desperation." Watching it, I could see that most women, especially those bound in heavily patriarchal and tradition-filled communities like those in India, really do live lives of quite desperation. But to be fair, I feel like each and every character in this movie was restricted in their own way. It's just that Radha and Sita, played so wonderfully by Shabana Azmi and Nandita Basu respectively, had their restrictions put upon them and they finally rebelled. I like how the film slowly questions the ways women are oppressed in Indian societies, through religion, traditions and patriarchy. A woman's desire seems bound to that of her husband and the film shows how that is not true and that to desire for things is what living actually is.

Again, it is not a perfect film. I had never watched an Indian lesbian drama. In fact, I thought of it more as a love story than a lesbian story, sort of like Brokeback Mountain was when it came to men. This is because, as many gay activists pointed out, to see it simply as a lesbian story makes it appear like lesbianism is caused due to marital neglect by women's husbands, which gives out a terrible message. For me personally, it was odd watching all of them converse in English because of the setting. Also, I thought that the music in the sex scenes was something out of one of those tantric porn videos which made them kind of pervy.

I wanted to watch a film directed by a woman for my Blind spot series. This is the first film by Deepa Mehta that I have watched and I am definitely keeping an eye out for her. I like the way she mixed the Indian culture, often showing us the stories that birthed it, and the way it has Westernized. I hope more people make movies like this. 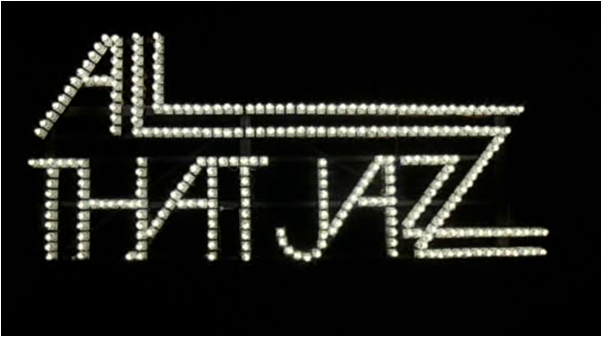 Basic plot- Joe Gideon, a musical theatre director and choreographer, lives a life of excess- whether it is his smoking, his women, his medication or his work. Starting everyday with an "It's showtime!", jazz hands and all, he immerses himself in this elaborate life, creating a huge musical and editing a film on a stand up, until this excess catches up with him.

There are many things to love in this film. Obviously, there are the musical aspects. I could see how this film gave rise to things like Chicago- where the musical elements are a sort of commentary on someone's life. In this case it's Gideon, whether it is his beginnings, his illness, the five stages of grief or his end. The songs are from different genres, the set-ups are spectacular and they all look great. There is also the musical Gideon is working on and oh my god, this film had the sexiest musical number I have ever seen. "Take Off With Us" turns into basically an orgy and it is completely amazing. The other musical numbers are fantastic too but this one is sticking with me forever.

Another reason I loved this film was Roy Schneider. I never, ever, ever, ever thought he could do a role like this. He was sexy and mean and cool and conflicted and damaged and cocky- gaahhh, so good! I mean, he was quite an asshole but he still managed to make him heartbreaking. Such an inspired casting choice.

The film is based on Fosse's own life and though occasionally it is a bit indulgent, I like it when filmmakers reflect on their own experiences through their art. I did think that Cabaret, the only other film of his that I have seen, had a better story and a perfectly matched style, but this was more ambitious and, obviously, I respect that. I can also see myself liking it more and more as time goes by.