Hello nice people who still read this blog even though I do nothing on it. How are you all? How is your day going? I hope your day goes well and everything is awesome and blah. My day, in case you're wondering, is not going that great. Firstly, I had this awful dream about lizards attacking me and I woke up pretty early because of that. Secondly, I have to go to the doctor's pretty soon because in spite of being Indian, I think I'm allergic to the Indian weather. Speaking of, the weather here is terrible right now. It's like summer came back all over again, and I don't like summer. I like winter. For one thing, my like perennial cold actually makes sense then. For another, I have this really adorbs woolen sweater with reindeer on it and I unfortunately only get to wear it then. Thirdly, my results come out today and I'm properly super nervous about them. We found out about it yesterday. I have little-to-no memory of giving my exams because I was so sleep-deprived throughout but I do remember not being particularly ecstatic about any of them, so that's not great. Lastly, I don't know how my day will end because of the results bit and that's also stressing me out. Gahhhhhhhhhhhhhh!

Anyways, now that that's out if my system, let's get back to the world of cinema which is a world all of us care about unlike my stupid life and my stupid day.

Note: There's no way in hell I remember all the movie news announced in the last four months, since my last Thoughts post, and I'm not going to go through websites looking for them either.

1) SARAH POLLEY IS MAKING LOOKING FOR ALASKA!! I know that this is old news but I'm still very excited about it and I needed to acknowledge that on my blog. I know I have only seen one Polley movie, which is Stories We Tell, but god, it's one of the best movies I have ever seen and Looking for Alaska is one of the best books that I've ever read and it's SO fucking amazeballs that both of these are coming together. Even when I first read LFA, I had wanted a female director to make its movie because I just had a gut feeling that they'll do justice to it better than a male director can (See also: The Virgin Suicides, American Psycho) and yaay Polley is fantastic. I need this film in my life already.

2) In related news, the Paper Towns movie is also being made and they've cast Cara Delevingne as Margo Roth Spiegelman. This is pretty great news. I love Delevingne's look and energy. She was apparently the best part about The Face of an Angel, which showed at TIFF. My 13 year old brother is in love with her and one can understand why a character like Q, who is the protagonist of the story and will be played by the adorable Nat Wolff, will fall for someone like her. I already prefer this casting to that of The Fault in Our Stars because I still hate Ansel Elgort's face. The film will come out next year and will be directed by Jake Schreier who made Robot and Frank (which I have not seen. How is it??).

3) Matt Smith has been cast as Mr. Collins in the upcoming adaptation of Pride and Prejudice and Zombies. I find this very odd. I always saw him as a Bingley. Mr. Collins is a clown and not in a good way. Still, I'm happy to see Smith in anything. The film also stars Lily James (Smith's current girlfriend btw), Sam Riley, Douglas Booth, Jack Huston and Bella Heathcote.

4) Fincher news- All of the Fincher stuff getting released nowadays is so interesting. From the fact that he cast Ben Affleck as Nick Dunne in Gone Girl because of his creepy smile to his new projects which include an HBO series he is developing with James Ellroy about the corrupt studio system in the 50s, which will be in the style of the classic film noir, and a TV series about 80s music video industry!! Is anyone else having major "Vogue" flashbacks? He also said that the sequels to The Girl with the Dragon Tattoo may still get made which is something I kind of need in my life. Finally, did everyone watch and love his adverts for GAP? Fincher seriously needs to make a black and white movie already.

5) Jessica Chastain will star in Xavier Dolan's next film, which is also his English language debut, The Death and Life of John F. Donovan. It's a satire of the gossip magazine business and Chastain is playing the antagonist, which is going to be delicious. Can you imagine how Dolan is going to dress her? *swoons* This is amazing news and I love the fact that all this sort of originated from a flirty Twitter convo between the two cinema geniuses (which is what they are).

6) Other casting news- Daniel Radcliffe's movie about the Brooklyn Bridge called *obviously* The Brooklyn Bridge now also has Brie Larson and Sir Ben Kingsley. Yaay! Love the idea of DanRad and Larson starring in a film together, although isn't she taller than him? There is going to be a Ben-Hur remake and I'm kind of okay with that because it will star Jack Huston and I love Jack Huston. It will also star Morgan Freeman and is being written by John Riley who wrote 12 Years A Slave.

7) Trailers- I just saw the trailer of Big Eyes. I like the look but I absolutely hate the song. Why would someone like Tim Burton use that song? I don't understand. A Most Violent Year looks pretty intriguing. I love the shot of Chastain at the end. The Hunger Games: Mockingjay part 1 trailer is also out. I'm just too excited about Natalie Dormer being in this tbh.

8) Finally, it's almost time for the results so I'm just going to stop here and leave you with this beautiful man and his beautiful scruff- 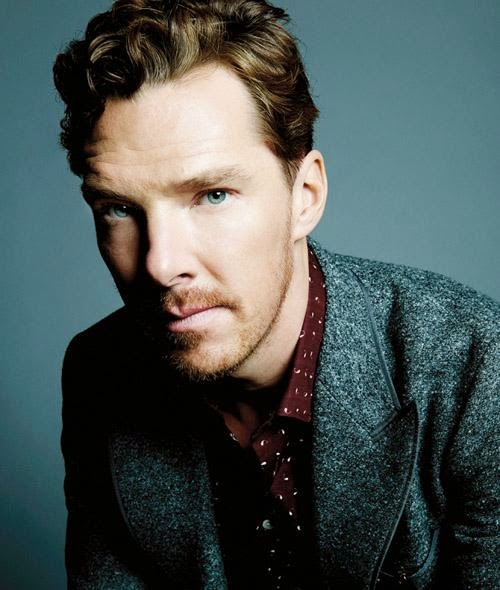