The Months that were May, June, July and August

Hello again peoples! Seeing how I haven't blogged in about three months and I haven't blogged properly in like forever, a post of this size was obviously on its way. Um, due to my never-ending exams and my laptop breaking, I have not been the tidiest in keeping track of all the movies and TV shows I have watched these past four months so in this post I'm just going to list down all the stuff that I've watched that I remember about and as for the things that have slipped out of my teeny tiny brain, well, sucks for them. They must not have been that good to begin with *tosses hair back sassily* 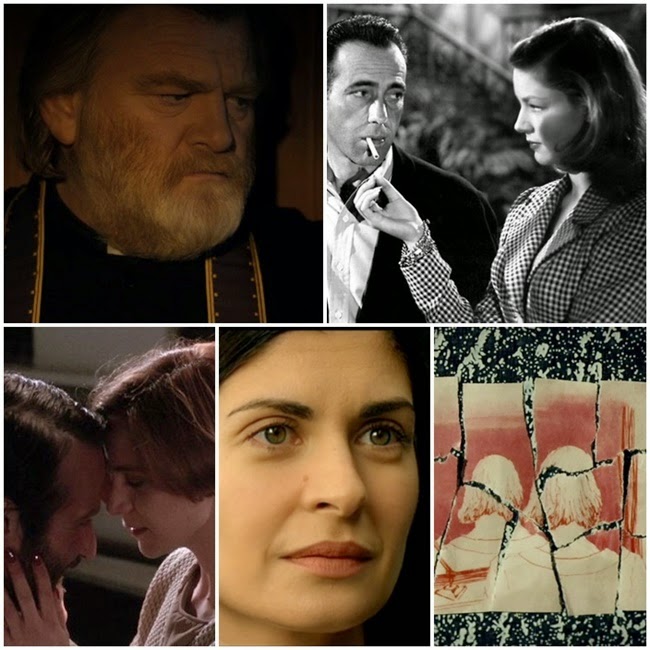 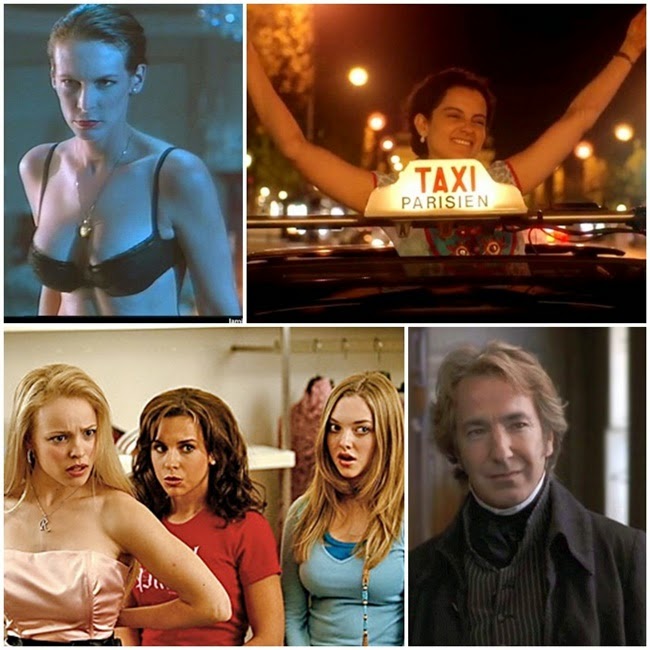 1) Mean Girls- I think this was for Mean Girls Day. Or not. As if I need a reason to rewatch this masterpiece.
2) Edward Scissorhands- You had so much promise, Johnny Depp! WHY?!!!!!!
3) Thirst- For the Matineecast. I got to be less tense and enjoy it more this time 'round.
4) Sid and Nancy- For the Matineecast as well. God, Sid and Nancy were young :S
5) Only Lovers Left Alive- The Matineecast yet again. Still fucking cool.
6) Pride & Prejudice- I may love it more than the text. A brilliant romcom.
7) The Lego Movie- It was my in-flight movie. Still fucking awesome.
8) Sense and Sensibility- I was in an Austen kinda mood.
9) Clueless- Like I said.
10) Lock, Stock and Two Smoking Barrels- I forgot how brilliant this film was. That score alone is to die for.
11) X-Men: DoFP- McBender 2 times :D
12) True Lies- For the Dumb Action movie episode. This one was my choice. Man, that Jamie Lee Curtis-machine gun scene is still genius!
13) Air Force One- Podcast. Harrison Ford in this is my favourite movie president :P
14) The Grand Budapest Hotel- Yep, I loved it alright.
15) Queen- It was coming on TV. Still one of the best films of the year.
16) Harry Potter and the Deathly Hallows, part 1- I seriously love this installment. My second favourite of the Potter films. So stunning.
17) The Lego Movie- I bought the DVD. It's just soooooo awesome, ya know?
18) Fight Club- For my birthday, as I wrote here.
19) Dead Poets Society- Podcast. This is a great movie. That's all. 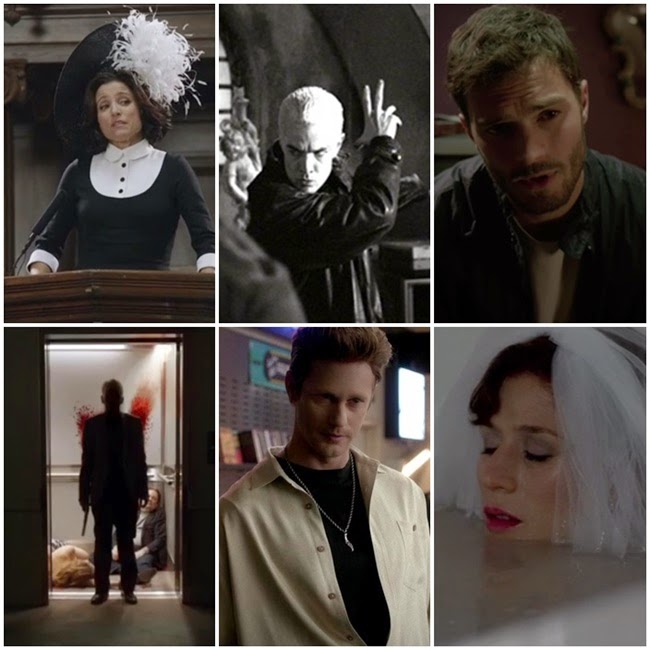 1) The Fall, season 1- Jamie Dornan, you gorgeous fucker. As if I don't doubt my mental stability enough, here we have ANOTHER super hot serial killer! Although, props to the show because he's matched by an equally adept and very refreshingly unusual "good guy" played by the amazing Gillian Anderson. I really liked the show even though it disturbed me in many ways. I even rewatched it but only the Dornan-Anderson bits. Can't wait for season 2.
2) Buffy the Vampire Slayer, seasons 3-5- Season 3 and 5 *might* be my favourites, mostly because of the villains and I do mean Faith for the former. Season 4 was a bit meh, thanks to Riley and the worst villain ever, Adam (ew). There were some pretty incredible episodes. "The Body" is easily one of the best hours of television I have ever seen. I love this show and I kind of took a break from it mid-6th season because I was getting too obsessed but I'll restart v. soon.
3) Fargo, season 1- Holy shit, this show is brilliant! I love it to bits. So funny and dark and just surprising at so many levels. Just look at the character of Lorne Malvo who is completely and deliciously unpredictable. Billy Bob Thornton has done a fantastic job with him, and same goes for other actors in it like Martin Freeman who REALLY surprised me with how wormy (that's the only word I can think of to describe Lester) he can be, Allison Tolman who gave us a true TV hero after what seems like forever and Bob Odenkirk who's so lovely.
4) Game of Thrones, season 4- Again, WOW this post is late! Remember when this happened? I liked this season. For what feels like the first time ever, more evil-er characters died including the spawn of the devil himself. Hurrah! a) Favourite episode- "Mockingbird" 'cuz not only did it have one of the best scenes in the whole series between Oberyn and Tyrion, it also had hot Daario stripping while Khaleesi sips wine and watches the beautiful, beautiful show. #PoorJorah b) MVP- As much as I have enjoyed watching Sophie Turner turn Sansa into a true player and Jack Gleeson create a character who embodies hate itself, this season belonged to Pedro Pascal's Oberyn Martell. The Red Viper himself, he's sexy, sassy, complex, heroic and hilarious, and Pascal just acted the hell out of this part. So good. c) Favourite quote- This one is for Sati. I don't remember it in the show itself but reading it now, I quite like the idea it embodies.

Stannis: "I will not become a page in someone else's history book."

5) Veep, season 3- Starting this show has been one of my smartest decisions this year. Loved this season. I love where they're taking it and I love everyone in it and I love all the insults! FUCKING BLESS THIS SHOW! a) Favourite episode- "Debate" for Selena's haircut, Dan's transformation and "holes". b) MVP- I have a soft spot for Timothy Simons' Jonah. He's such a stubborn loser. Him reading Dan's medical chart is one of the funniest scenes of the season. c) Favourite quote- This show has too many amazing quotes but I laughed the hardest at this.

6) The Originals, season 1- Wayyy better than The Vampire Diaries although it does meander quite a bit. I quite enjoy all the politics and backstabbing in this. a) Favourite episode- "From a Cradle to a Grave" because it had all the best elements of Julie Plec's twisty plots but with a very lovely emotional core. b) MVP- Joseph Morgan's Klaus is still a very complicated character and I've been a fan of his since TVD. (no quotes for this one, soz.)

7) Orange is the New Black, season 2- I feel that this season went into more conventional directions and wasn't as mindblowing as the first. Still, it is one of the best shows on TV right now and I love it. a) Favourite episode- "A Whole Another Hole" if for nothing else other than Morello's heartbreaking backstory. But it also has the "hole" situation, Big Boo and Nicky trying to fuck Soso and Poussey and Taystee being lovely. b) MVP- I'm going to say it here and now: no TV performance (and maybe in movies as well) I'm going to see this year is going to beat Lorraine Toussaint's as the diabolical and endlessly fascinating Vee. She OWNED the screen every time she was there. If she was in Game of Thrones, she would be sitting on that Iron Throne. So much control but gosh, it is terrifying! c) Favourite quote- This quote is hilarious and also comments on women's issues with this world, which is what the show gets so right most of the time.

8) True Blood, season 7- And that's the way this show ended, not with a bang but with a gooey fucking mess. Aww man, this has been a difficult show to stay faithful to. Thank god for characters like Jessica, Lafayette, Jason and of course, Pam and Eric. a) Favourite episode- "Death is Not the End" for 80s and 90s Eric and Pam. If only the whole show was about them. b) MVP- Fuck this, I'm going to choose Tara Buck's Ginger. Bless her screaming and her wanting to bang Eric from the moment she first saw him to her actually banging Eric which reminded me of why I never gave up on True Blood because what other show can show a scene like that? Beautiful. You go, Ginger! c) Favourite quote- I'm allowed two because we'll never get this chance again.

Pam: "It's like being kicked in the cooch by a wallaby isn't it?"
Just because of the imagination put into this.

Ginger: "Eric Northman is nothing if he is not pure fucking sex on a throne."
'Cuz #FACT

Phew, it's over! We got through this together, you guys! I don't know what is going to happen in September. I really want to write some posts but final year is hectic as hell and I can't make any promises right now.