Do I regret watching Before Midnight?

Note: This post is full of spoilers for anyone who has not watched all three "Before" movies. 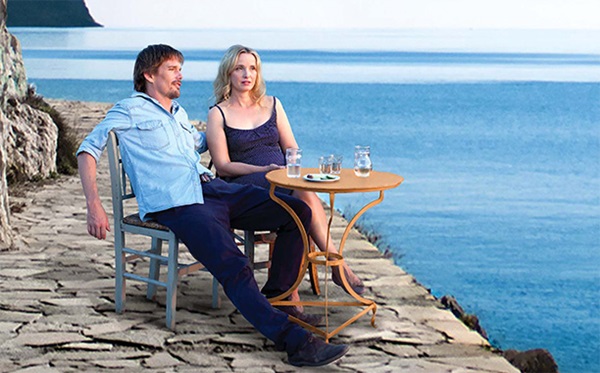 I know I have been freaking out about this film ever since they first announced it. I mean I was practically dancing when I found out that I will be watching it. But now that I have watched Before Midnight, the third part in the story of two people, Celine and Jesse, I cannot help but wonder if I really needed to watch it.

Now before we go any further, let me wipe out any doubts about the movie itself. Before Midnight is a really good movie, perhaps even a great one. It has excellent writing and direction and maybe barring out the car scene in Before Sunset, contains the best performances of the actors playing Celine and Jesse, Julie Delpy and Ethan Hawke respectively.

I think the only way to explain my problems with Before Midnight is putting it in relation with the the first two movies in this "Before" series, Before Sunrise and the afore-mentioned, Before Sunset. Unlike most people I saw Before Sunset first, purely by accident (and what an accident that was!) and then watched Before Sunrise. I immediately fell in love with the two characters and their relationship and the way the movies just focused on them and their thoughts and actions, desires and misgivings.

Before Sunrise to me is one of the most magical, fairytale-like love stories I have ever seen, because as much as we want it to happen, the chances of us meeting the perfect person while traveling and spending a night just walking and talking around a beautiful foreign city are v.v. slim. Also the two characters, Jesse and Celine, are very young and full of new ideas and romanticized notions in this. It is the kind of movie that captures all the loveliness of young love without getting into the melodrama because they part before anything bad can happen. It is the perfect love story- short, sweet, touching and beautiful.

I had not yet gotten into movies when Before Sunset was released. I can imagine people getting outraged and whatnot, and this was a time before we were drowning in sequels too. Before Sunrise was just that precious. But I think Before Sunset is as close to cinematic perfection as one can get. What it did was to ground the idealized romance of Before Sunrise into reality. I loved the fact that Jesse and Celine had in fact not turned into a perfect couple, hell, they had not met ever since that fateful night! It was a film that actually answered the question of "what could have been". Celine and Jesse had grown up and become more world-weary, but they were still themselves. They had all sorts of "adult" problems and they were sadder than before, but I liked that because I thought it was the way of life. And then there was the ending after which we wondered for nine years whether or not Jesse missed that plane?

As it turns out, he did. I will admit that every time there was a reference to the first two movies in Before Midnight, I nearly died of joy. I actually fist-pumped the air when I saw Celine waiting for Jesse as they were together now, and with twins! But after the initial excitement subsided, and the arguing began, I started getting scared a little bit. And the entire hotel room scene, I kept thinking and praying that they don't end up divorced by "midnight" because that would be a mighty fine ending to this tale. Of course they didn't, and I can honestly see how whatever happens is the only possible conclusion (?) to this story of these two people, but even after accepting that, I kept feeling like someone had punched me in the heart and it was not nice.

A part of me thinks that this happened because I had watched the first two right before going for Before Midnight. An entire day spent with Celine and Jesse and their wonderful, ephemeral, frustrating romance to end with me fearing for their relationship was harsh. Because of this or otherwise, it just got me thinking about if I needed to see Before Midnight at all?

There is a quote in Before Sunrise and a line of dialogue from Before Sunset that I feel can answer this question:

"I used to think that if none of your family or friends knew you were dead, it was like not really being dead. People can invent the best and the worst for you."

"...do you think they get back together?"
"Look, see, in the words of my grandfather, to answer that, would take the piss out of the whole thing."

There was also a little bit before the Before Sunset part when Jesse talks about how the ending to his book, which is based on the first movie and the idea can also be used to assess that of the second movie, is a test to see if one is a romantic or a cynic. These two movies have among the greatest ambiguous endings ever- this isn't just a spinning top, it's lives! I think a huge reason why I am reacting the way I am is because I think of Celine and Jesse as real people. That's how good these movies are, Before Midnight included. Which is why it hurt to see that they have become so crabby and hurtful. I did not want to see that! I was happy inventing truths for them. I would sometimes feel that they did end up together, and other times I thought that it wouldn't have worked out. And now I know, and I feel like I was better off not knowing.

I remember that when I had rewatched the first two movies in my final year of school, I felt myself more in tune with the Celine and Jesse of Before Sunset. I also remember thinking about how I was more like the Celine and Jesse of Before Sunrise when I was younger, and that was a startling revelation. I wondered if I was turning cynical and how that may be a repercussion of growing up.

But ever since that, my identifying myself with the two tends to shift between the movies. This again goes back to the test, I feel. I am both a romantic and a cynic, but what I am not is a realist. One could argue that this is the biggest reason why I was left so... shattered by the end of Before Midnight. And I get what Delpy, Hawke and Richard Linklater, the director of all the "Before" movies, were trying to do and show. On a cerebral and a cinephile level, Before Midnight is nothing if not a triumph. I completely understand that. However, as someone who started out in the morning thinking about how she will be 23 in two years time, the same age as Celine and Jesse when they met, to trying to sleep at night but not being able to because she knows how miserable she will be in twenty years- that's just not what I had expected.

Now, I'm not stupid. I know that things change- people, relationships, life. I stand by what I said on Twitter- I *will* probably appreciate Before Midnight more when I'm older. But I just know I will never love it the way I do the first two movies because there is no magic in it, at all. Where are the poems and the songs? The music rooms and staircases? The electrified, palpable space between Celine and Jesse? Now they can't even be in a room together, and that terrifies me. Do remember that movies tend to affect me more than most people- I'm the person who wanted a personality disorder after watching Fight Club for the first time. Yeah...

I realise I might have come off as a crazy, desperate person in the course of this post, and who's to say I'm not. That's not what bothers me. What bothers me is that I am now genuinely afraid of the next "Before" movie, if they do make one. I never thought this day would come but I don't know if I will be able to handle that. I mean, Celine and Jesse will be 50 and crabbier than ever. I don't want to see them turning into Martha and George from Who's Afraid of Virginia Woolf?. I don't want to see them properly separated. I just don't want to see it, but I know I will.

So do I regret watching Before Midnight or not? Well...

When I sat down to watch Before Sunrise on the day I saw Before Midnight, I noticed how the film starts off with a German couple fighting and not either of our leads. I don't think I had marked this before. I also found it funny and interesting to note that if they had not started fighting, Celine would have never changed her seat, Jesse would have never talked to her and this entire journey that we have been on with both of them would have never occurred.

After watching Before Midnight, I could not help but think that Celine and Jesse now were like that very German couple.