That is a very famous song from my childhood. It was either that or "East or West, India is the Best!" I know what you're wondering- why this sudden patriotism, that too the kind celebrated with really cheesy 90s tunes? It is because today, the 15th of August, is India's Independence Day. The 64th to be exact.

Obviously this one is the most apt- it's India's National Anthem Jana Gana Mana, being performed by some of the most prominent musicians from all over India. Non-Indians will probably only recognise A.R. Rahman, and even I don't know all of them. It is pretty incredible though.You know despite all of India's problems with politics and poverty and population, it's quite a great country. No other country has so many cultures living all together...every region has its own beliefs and traditions, and food (!), and it makes me quite proud really- being an Indian and all.
Anyways, since this is primarily a film-blog, today presents with itself the perfect opportunity to make my favourite Indian Bollywood films, i.e.- films made by Bollywood regarding India.
Honourable Mentions- The idea of terrorism in Main Hoon Na, when all fingers didn't point to Pakistan, thank god.

10) Karma, directed by Subhash Ghai
The story follows a police officer who captures a deadly terrorist and then the terrorist breaks free, killing most of the officer's family and secretly kidnapping his wife and his youngest son. The officer makes a team of three felons to take revenge from the terrorist. 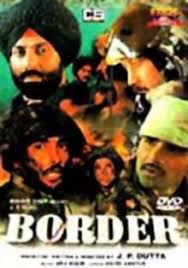 9) Border, directed by J.P. Dutta
This is a war epic about the Indo-Pakistan War of 1971. We see the soldiers, their lives and families back home and their bravery and love for their country on the field. This had one of the biggest ensemble casts ever, and some great songs that are sung till this day. 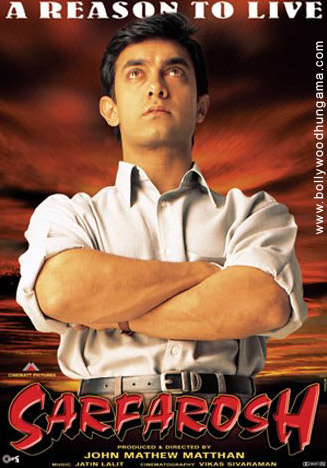 8) Sarfarosh, directed by John Matthew Matthan
The story of an honest and able cop, with a tragic past, who fights against cross-border terrorism. Aamir Khan and Naseeruddin Shah were truly brilliant in their roles.

7) Naya Daur, directed by B.R. Chopra
This released a decade after India gained its independence and originally in black and white, it was released in  colour a few years back. The film is about Industrialisation slowly making its way into the villages of India. Horse-cart drivers in a village face competition from a bus service, and their fate is decided by a race between one particularly free-willed "Tangawala" or horse-cart driver played by Dilip Kumar, and the owner of the bus service- Bus versus the Tanga. This film can be regarded as the fore-runner for films like Lagaan.

6) Mother India, directed by Mehboob Khan
The first Indian film to get an Oscar nomination for Best Foreign Film in 1958. This film is about a woman from the rural India, who despite her poverty and family problems, lives her life by her morals and ideals. I personally think it is too idealistic a film, but the cultural significance is just enormous.

5) Chak De! India, directed by Shimit Amin
This film simultaneously uplifted our actual national game Hockey, empowered female athletes, and put Shah Rukh Khan back on the map as a serious actor. It is pretty kick-ass, this film. 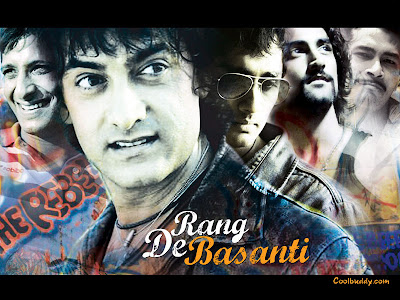 4) Rang De Basanti, directed by Rakeysh Omprakash Mehra
The story follows a British filmmaker who comes to India to make a film on Indian freedom-fighters during India's independence. She gets a group of carefree college students to act in her film, but as tragedy strikes, their lives start to parallel those of the freedom-fighters.

3) Swades, directed by Ashutosh Gowariker
The film follows an NRI who returns to India to his childhood nanny in an Indian village. Here he sees the conditions- the widespread discrimination, educational backwardness and other such social evils that still exist. So he decides to change things. Another stellar performance by Shah Rukh Khan and one of the most progressive, and important Indian films that I have ever seen.

2) Lage Raho Munna Bhai, directed by Rajkumar Hirani
Probably the most important film that has released in the last decade or so, in my opinion. This film follows a goon, Munna Bhai who adopts the doctrines of Gandhism with his own twist in order to impress the girl of his dreams. The "Gandhigiri" started by this film is so pivotal in the world right now. And the humour and heart in this film is to die for- a masterpiece.

1) Lagaan, directed by Ashutosh Gowariker
I must tell you that I absolutely despise cricket. More than anything else in this world. And inspite of that, this film is absolutely stellar. A true Bollywood film in my eyes. It has all the elements- the true Indian village, the freedom fighting, the love triangle, the underdog story, the great Hindi songs and ofcourse the cricket. Very few films make you feel hopeful like this one does, and it is the perfect story about independence from the heart of India.
Hope you enjoyed it. Happy Independence Day people!
Posted by Nikhat at 9:53 pm