"There is no good or evil: only power and those too weak to seek it." ~ MY FAVOURITE HP VILLAINS

I remember that quite a while back there was all this talk about how the Harry Potter stories are not about good versus evil, but of evil versus greater evil as we have always been taught that witches are bad (save Wizard of Oz maybe, but still Glinda was an idiot). I don't remember if it was completely a Christian opinion or not, but it certainly was a very interesting one. Now I personally don't think so, and neither does JK Rowling. She has said that save one character, who is beyond redemption, all the characters have both light and darkness in them, which I guess is the case with pretty much everyone in the whole world. In the Harry Potter world, since magic was in the picture, the villains get the chance to do much more.
My favourite villains are:


Honourable mentions: The Troll in HP1, the Hungarian Horntail in HP4, Lucius Malfoy 5) Madam Professor Dolores Jane Umbridge (played by Imelda Staunton)-
Okay, generally I love villains. In her case, not so much. I pretty much loathed her the most, and she's one of my least favourite villains ever. But that's only because she really is a brilliant one. I would never want to meet her- with all her pinkness and cat-fetish and sweet voice, she really was a monster in disguise. She could have been a Nazi with utmost furry comfort, and terrorised legions of people with her little laugh and those quills and medieval torture methods. Staunton breathed life and malice into this character, whose biggest trait in the book was just the toad-face. 4)  Professor Quirinus Quirrell (played by Ian Hart)-
People do not give enough credit to Quirrell in my opinion. As a kid watching this film, he was the scariest thing ever. A two-faced/headed man...creepy. And the whole transition from the stuttering idiot to a menacing parasite, it is quite effective. Hart was funny as Quirrell. Originally David Thewlis had been approached, but I think Hart did total justice to the ill-fated DADA professor. 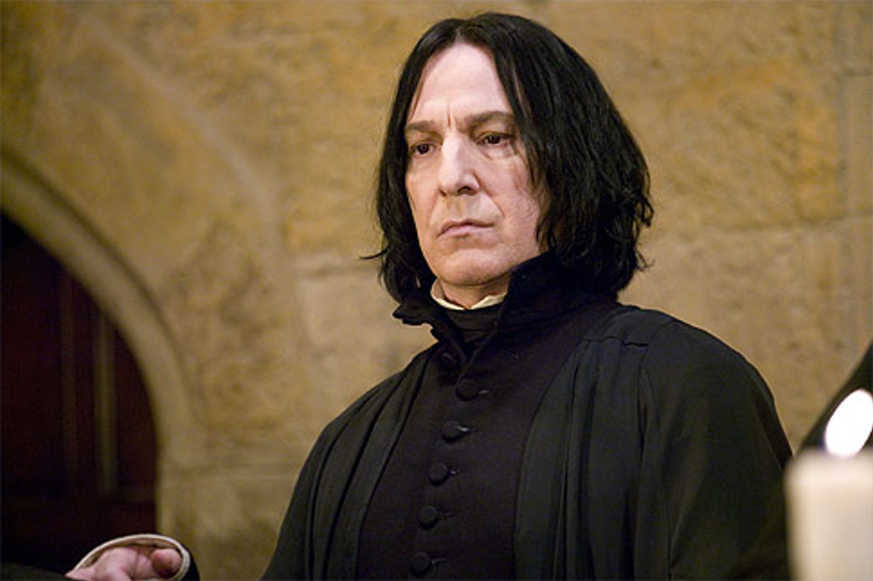 3) Draco Malfoy (played by Tom Felton) and Severus Snape (played by Alan Rickman)-
Both who weren't quite the villains we thought they were, at the end. The first is the kid we all love to hate- privileged, smug, too much hair-product...yuk! With the superiority complex and racist qualities, he was the Trio's nemesis at the beginning. Felton was born to play Malfoy. I can never imagine him as Harry, and with good reason. He owned Malfoy- the smirks, the screaming, the bitchiness.
The second was a shady character throughout, who showed utmost dislike towards our protagonist, Mr. Potter, and became especially detestable in the 6th installment. The truth ofcourse, was quite something else. Rickman was God-like in this role...people could not get enough of his sonorous, slightly mocking voice and the hair-flips and the awesome wardrobe, and obviously the mystery behind the barely discernible character. Probably the most famous supporting character in the films ever. 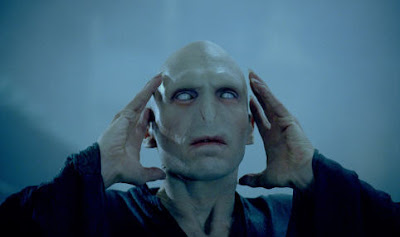 2) Lord Voldemort (played by Ralph Fiennes)-
Several actors have played the Dark Lord, the only other really effective one being Fiennes's own nephew Hero Fiennes-Tiffin who played him as an 11 year old. However, none can beat my favourite baddie-playing actor, Mr. Ralph Fiennes himself. Yes there is a lot of make-up and technology involved in making him look like that- nose-less and hair-less etc, but things like his whispery voice, the way he delicately holds the wands with which he unflinchingly kills people and obviously, whenever he addresses anyone- with contempt and a slight humour- they're fantastic! Some time back, he was even awarded the best villain by some UK publication/website. He is clearly, and deservedly, going down film history as one of the best antagonists ever.

1) Bellatrix Lestrange (played by Helena Bonham Carter)-
Okay so I had to eeny-meeny-miney-mo my way to the top spot (with the second one), but I definitely do not have any regrets. Bellatrix in the books seems bland compared to her cinematic counterpart. Casting HBC as Lestrange was nothing short of a stroke of genius! She is sexy and deranged, violent but still kind of a doll. I love her total devotion towards Voldemort. She is also the only completely bad person whose death I was saddened by (whoops! spoiler!!). Though HBC never really plays a completely 'normal' person, her Bellatrix is definitely the best of the kooks (along with Marla Singer).
Posted by Nikhat at 1:58 pm