Oh I'm such a ginormous fool! The very generous Ruth from ...Let's be Splendid about This... gave me the Stylish Blogger Award more than two months ago along with the wonderful Stevee from Cinematic Paradox, and I just found out that being a recipient of this award, I am supposed to write Seven relatively unknown things about me and give seven other bloggers the same award. 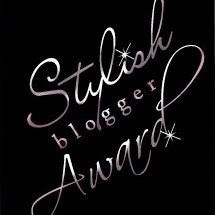 So Seven Things About Me That You May Or May Not Know:

1) I don't know what was the first film I watched. This is because my parents conveniently never bothered filling in the Baby Book (I had to fill my brother's). It was definitely a Bollywood film, and I have a strong feeling that it was a Shahrukh Khan film.

2) I'm a Nerd. Yeah...and sort of proud of it. Not only the marks-getting, teacher's-pet part of it, I also enjoy purely academic things like quizzing, debate etc., absolutely despise sports and am very asocial when it comes to things like parties and stuff.

3) I'm scared of most animals. They bite and scratch. I'm actually deathly afraid of dogs. I would probably choose the Exorcist over a dog, they scare me so.

4) I am a Hobbit. There is no other explanation for my height.

5) I love films and books, but especially those which are quotable. The reason why I love so many chick flicks is exactly that- "Oh my god Karen, you can't just ask people why they're white." And though it isn't exactly a good quality, but I would hate a book without memorable quotes- for example Macbeth (which is a play but you get what I'm saying...it's so uninspiring).

6) Remember how in My Girl, Anna Chlumsky's character Vada was a hypochondriac...I'm sort of like that except in place of diseases, I keep thinking I have personality disorders. This was a result of extensive Fight Club viewing, but everytime I hear or read about a personality disrder, I start thinking I have the symptoms. Except OCD...I'm pretty messy.

7) Lastly, I dream about being a director, and auteur, a filmmaker. While he is not my favourite director, I just really admire Peter Jackson for what he did with the Lord of the Rings series. Kubrick had said that it was unfilmable, but Jackson made it happen, in such a larg scale, in such a wonderful way. Too have so much passion for something you love, and then doing it so brilliantly, ain't that the dream?

1) Sukaina of She is the Last of English Roses
2) Flora of With Fur Eyelashes
3) Iliana of Tea with Mad Hatters
4) Univarn of A Life in Equinox
5) Fletch of Blog Cabins
6) Michael of Serious Film
7) Anna of Defiant Success
Posted by Nikhat at 5:40 pm