"I can't fucking believe I won." THOUGHTS ON THE 72ND GOLDEN GLOBE AWARDS 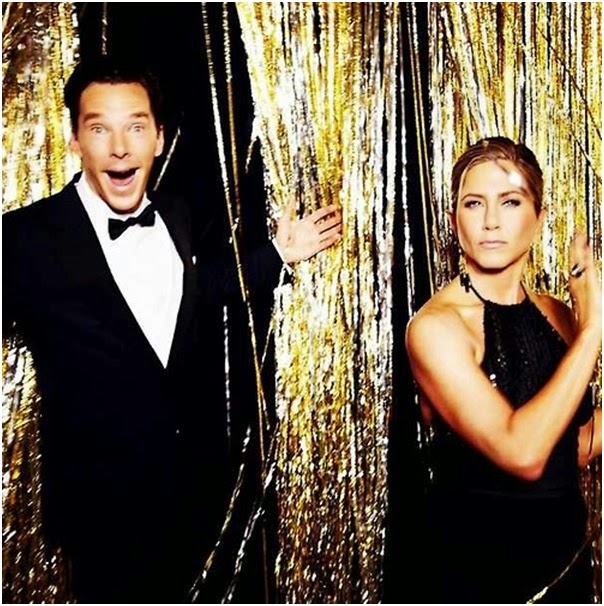 Okay so usually, I'm all like "OMG Globes are everything" and blah di blah but I have to say that I'm a bit disappointed this year. We'll get to that soon. Also, happy 2015 everyone. This is an odd sort of profanity-filled post to start the new year with but whatevs. If Amy Adams can keep winning Best Actress Comedy awards for roles that aren't fucking funny, I can do this, right?

1) Let's begin. I woke up like 5 minutes before the show started (which starts at 6:30 am here, in case y'all thought I was some kind of a lazy sloth based on how I run this blog) and I missed what people wore at the red carpet. Thanks to Buzzfeed though, I was able to catch up and well, I didn't like most of it. White and disco silver were the trending colours. My favourite looks were Dakota Johnson, Emma Stone, Anna Kendrick and Tina Fey's sexy lady tux (which I couldn't get a better photo of, sorry!). 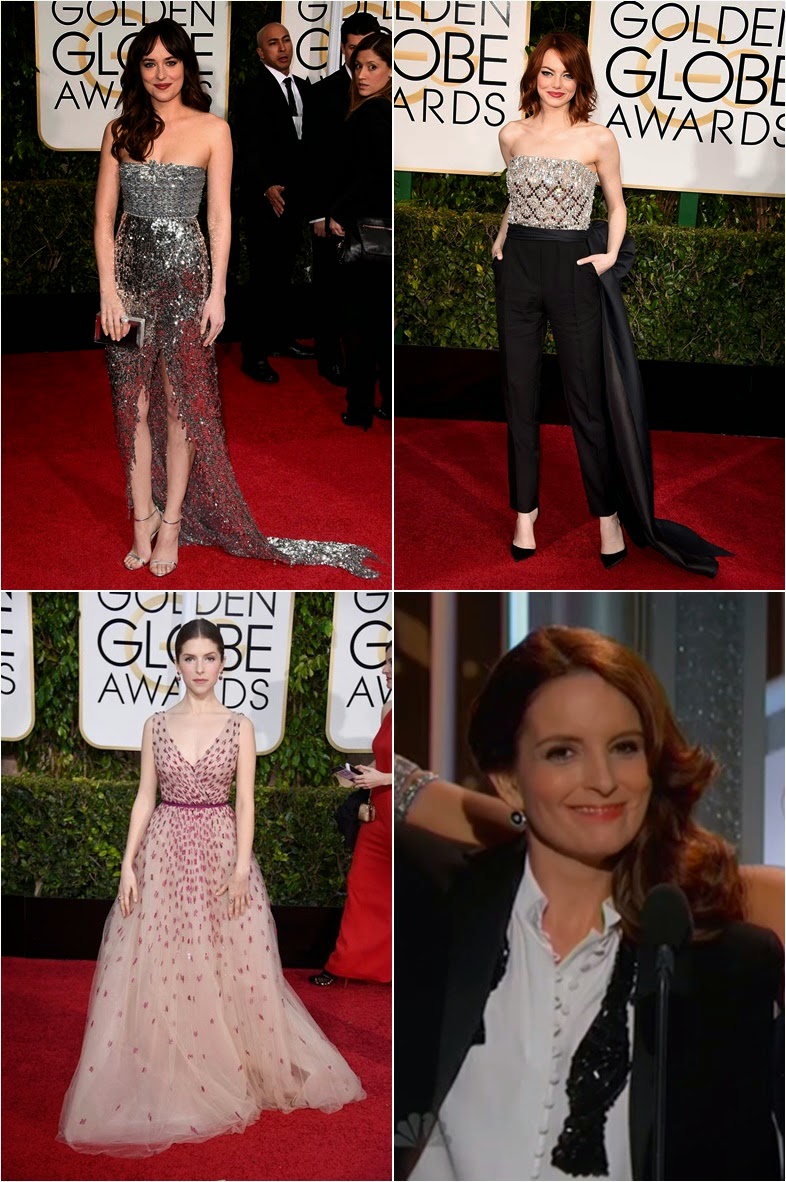 2) Among the men, there was Mr. Walking Sex himself aka Jamie Dornan, being all scruffy and, well, sexy. God bless Buzzfeed for posts like these. 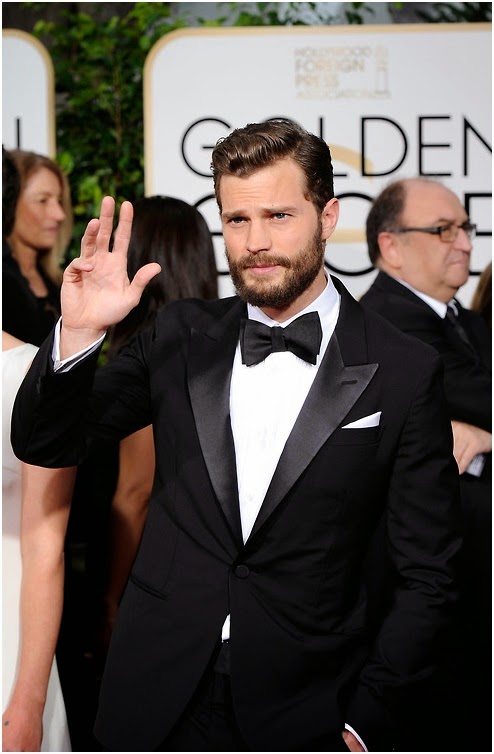 Among others, I also thought Jake Gyllenhaal looked especially fine and I loved David Oyelowo's (nailed it!) sparkly suit. 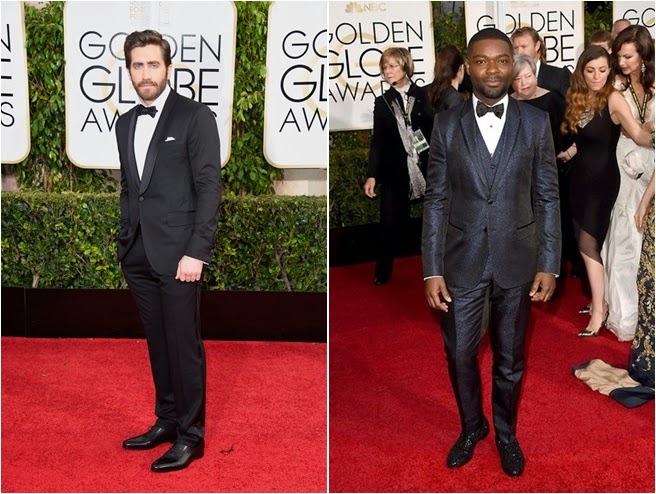 3) Okay so the show starts. I missed like 20 seconds of Amy and Tina's last ever Globe monologue *sobs*. They were pretty good. Loved the Emma Stone "Big Eyes" bit, especially her reaction.

Also Joaquin Phoenix being hilarious.
Can "Oh hey Joaquin" become some sort of viral catchphrase now? Like the opposite of "Bye Felicia"? Make it happen, universe. Also, is it me or is Joaquin slowly turning into Michael Stuhlbarg. I love Stuhlbarg but can we have looking like his hotter self from before? I mean, he used to look like THIS once upon a time.

And then there was the Amal Clooney bit. I want to be her so bad. Like be really intelligent while also looking like a goddess on earth.

They also played "Would you rather" and it was completely on point. Tina Fey's insistence on choosing Chris Pine was amazing and in that moment, I too was Tina. Finally, there was the Bill Cosby joke which was okay, just a little too long.

4) The first presenters were Benedict Cumberbatch who "volunteered" to come on stage with Jennifer Aniston. Aniston was wearing a dress with a thigh gap a la Angelina Jolie in 2012 Oscars except not as classy. Their bit was just weird. But then JK Simmons won and praised his above average children so all was well.

5) Mr. Walking Sex and Dakota Johnson came to present something but I don't remember what 'cuz who cares? Look at them! They're both so hot. I'm super looking forward to Fifty Shades of Grey.

6) JLo and Jeremy Renner came to present. I have no clue what JLo was wearing though Renner did make a comment on her "globes" so that was, um, nice? Fargo and Billy Bob Thornton won awards in their respective categories which was awesome!! Love both! Up until that time, I thought no one will beat Thornton's succinct and controversy-proof thank you speech but I was wrong. Still, it was great.

8) Then the awkward North Korean film critic (?) thing started and it just went on for too long. It's sad that the last Amy and Tina hosted show had to go out like this. Still, we got another Cumberbomb.

9) My favourite win of the whole award show which *almost* saves it in my eyes is Gina Rodriguz getting Best Actress Comedy for Jane the Virgin. She is soooooooooooooooooooo good in that show and the show itself is fantastic and her speech was so heartfelt and beautiful, it made me tear up. 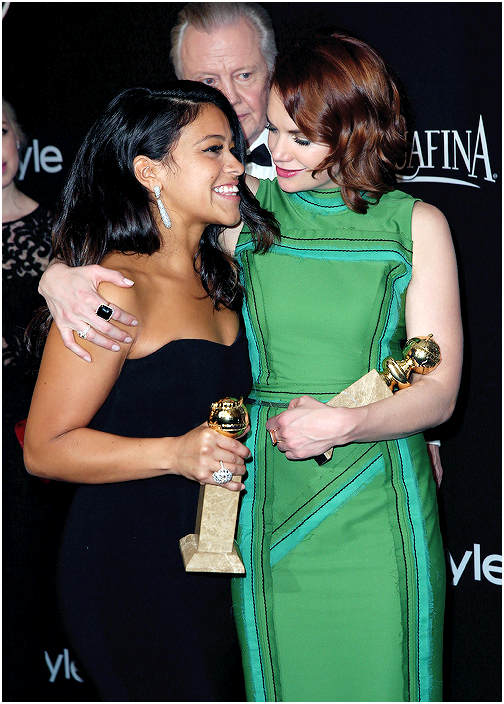 Oh and Ruth Wilson got Best Actress Drama for The Affair and though I don't watch that, FUCK YEAH ALICE MORGAN!

10) Transparent won Best Comedy Series and that was great too. Jill Soloway wore an awesome suit and she dedicated the award to the trans community and Leelah Alcorn.

11) Selma won for Best Song and Common's speech reminded me again why it is such a powerful film. The Theory of Everything won for Best Score which, though beautiful, has nothing on Mica Levi and Ross and Reznor imo. 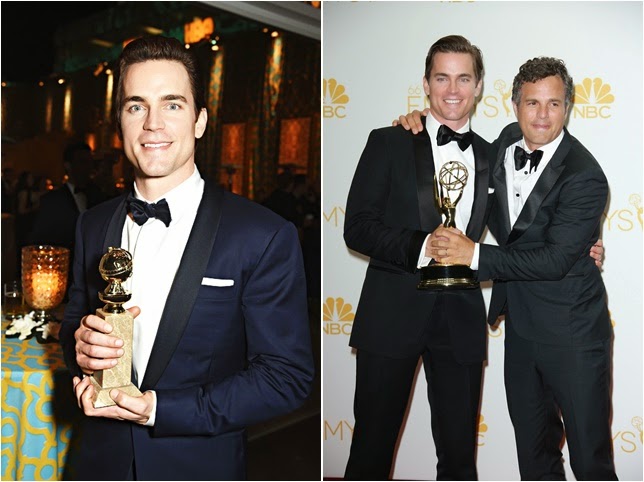 The second one's for Sati.

13) And from there, everything began to go downhill. Best Actress Comedy, an award that in a sensible and just world would have been won by Jenny Slate, went to Amy Adams for Big Eyes. I haven't seen Big Eyes, nor do I want to. The trailers make it obvious that Adam's role in this is as hilarious as it was in American Hustle last year. I'm going to go ahead and assume that Julianne Moore taking a dump in Maps to the Stars is funnier than anything Adams does in Big Eyes. Even Adams was not expecting it and her speech was terrible.

14) The Lego Movie didn't win Best Animated Feature which was sad. I love How to Train Your Dragon 2 but it's not even close to the brilliance of The Lego Movie.

15) Jared Leto came next with his stupid hair and his stupid beard and started talking. Every time Jared Leto talks, a fairy somewhere groans so loudly out of disgust that it falls down dead.

That was my favourite tweet re: Globes. Anyways, he presented Best Supporting Actress to Patricia Arquette who was all awesome and nerdy and she talked about single moms and about Meryl Streep and it was just lovely. Arquette for president!

16) Bill Hader and Kristen Wiig were great!! I think they should be the next Globe hosts. They presented Best Screenplay to Birdman which I didn't see coming at all. I loved Birdman but it's got nothing on Gone Girl.

17) Among the other television awards, Jeffrey Tambor, Maggie Gyllenhaal, Kevin Spacey and that chick from Downton Abbey won. Tambor was great. They kept showing Jake during Maggie's speech so that was fabulous and her speech was too. She talked about how there are roles depicting complicated women out there nowadays and how that is a good thing. Spacey's speech was another excellent one. He dropped the f-bomb but then went on to say a beautiful anecdote about keep wanting to do better and made me tear up AGAIN! Screw these talented actors and their heartfelt speeches. Also this was Spacey's first Globe win which is insane.

18) Mommy was not nominated for Best Foreign Film so I wasn't really paying attention to it but apparently Ida didn't win so yaay!

19) One of my favourite things about the Globes used to be how they always get interesting presenters, from Shahrukh Khan to the real Philomena but this year they got Katherine Heigl. Just going to leave that here.

20) George Clooney got the Cecil B. DeMille Award. It was all good. I really liked the cilp they played. I had honestly forgotten how many superb movies he has come in. Oh and they showed Out of Sight clip but not the bathtub scene one, therefore missing a huge chance for getting a collective orgasm from the crowd and the viewers. But they did show Ryan Gosling so it balanced out. Clooney's speech was nice and he was all lovey-dovey towards Amal because who wouldn't be? Have you seen her?!

21) Linklater won Best Director which was awesome! Yes, I wanted Fincher to win more but it's okay. Linklater is one of the greatest filmmakers EVER and it's gladdening to see him finally get the recognition he deserves. 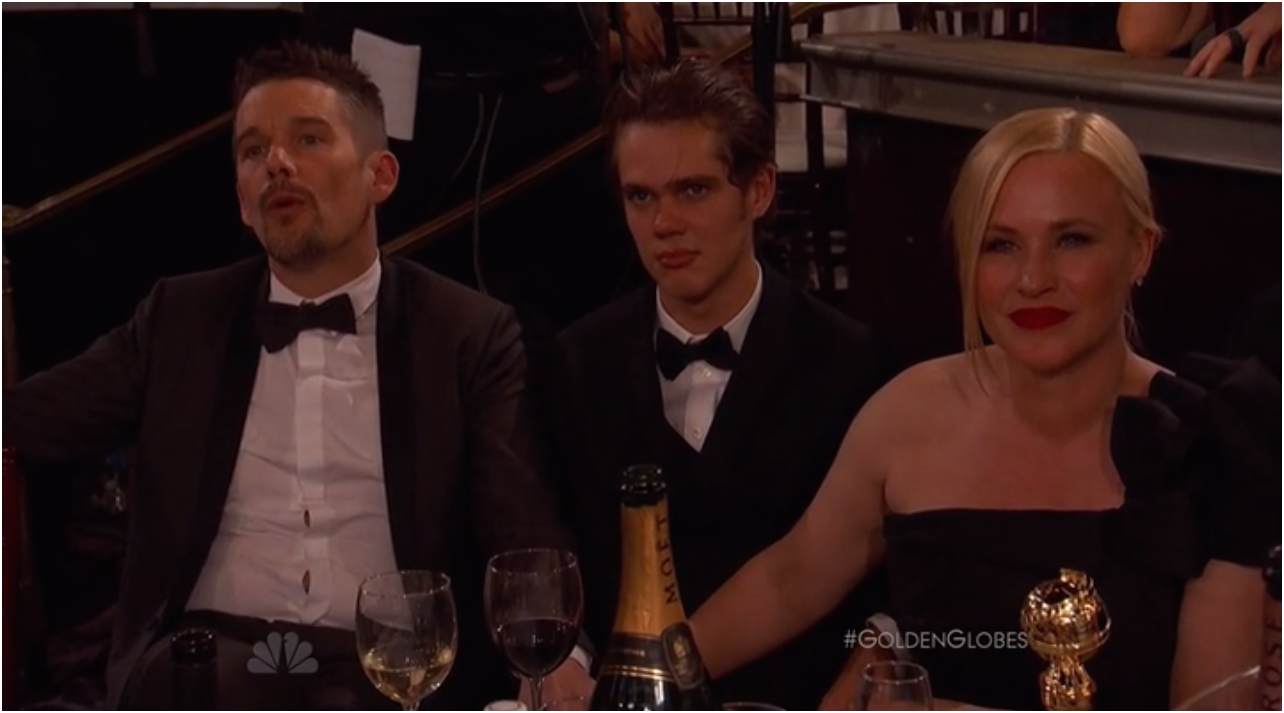 They've adopted him, haven't they?

21) Chris Pratt and Anna Faris everyone.

22) Michael Keaton won Best Actor Comedy and got all choked up when thanking his son. It was v. sweet. I still love Fiennes more but then The Grand Budapest Hotel won Best Film Comedy so I was happy overall. That was the first time I've heard Wes Anderson give a speech and it was appropriately quirky and funny.

23) Then the awards announcer dude was called the Best Film Drama the biggest award of the night, pissing me off YET AGAIN! Why do they always do that? Why the hierarchy? Have you seen the movies in Comedy this year? Come on, man.

24) At some point, Catherine Zeta-Jones had come to present something or the other and her dress looked really familiar to me. This is why:

I'll never be able to look at her, or the emoji, the same way again.

25) Then for Best Actress and Actor Drama, Globes fucked everything up. Moore got Actress. I love Moore, I really do, and I admit that I haven't watched Still Alice yet, but is there is no way she's better in a straightforward role like that than Rosamund Pike in Gone Girl. They could have easily given her Best Actress Comedy and awarded Pike for Drama. Fools! And then Redmayne won Best Actor Drama which was again idiotic as hell. Jake was freaking amazing in Nightcrawler. He too underwent a physical transformation for his role but it was to help with the emotional side of it, unlike Redmayne's who is *only* getting rewarded for the physical thing. Felicity Jones was the emotional heart of The Theory of Everything and the only one doing really awards-worthy work there. Redmayne is adorable as hell but I'm so disappointed in Globes.

26) Finally though, Globes did try to salvage the mess and awarded Boyhood Best Film Drama. Phew! I know it's fun to have some uncertainty and boring to have a clear-cut forerunner but we shouldn't begrudge an achievement like Boyhood for that, which works not because of the 12 years put into it but because of the heart put into it. 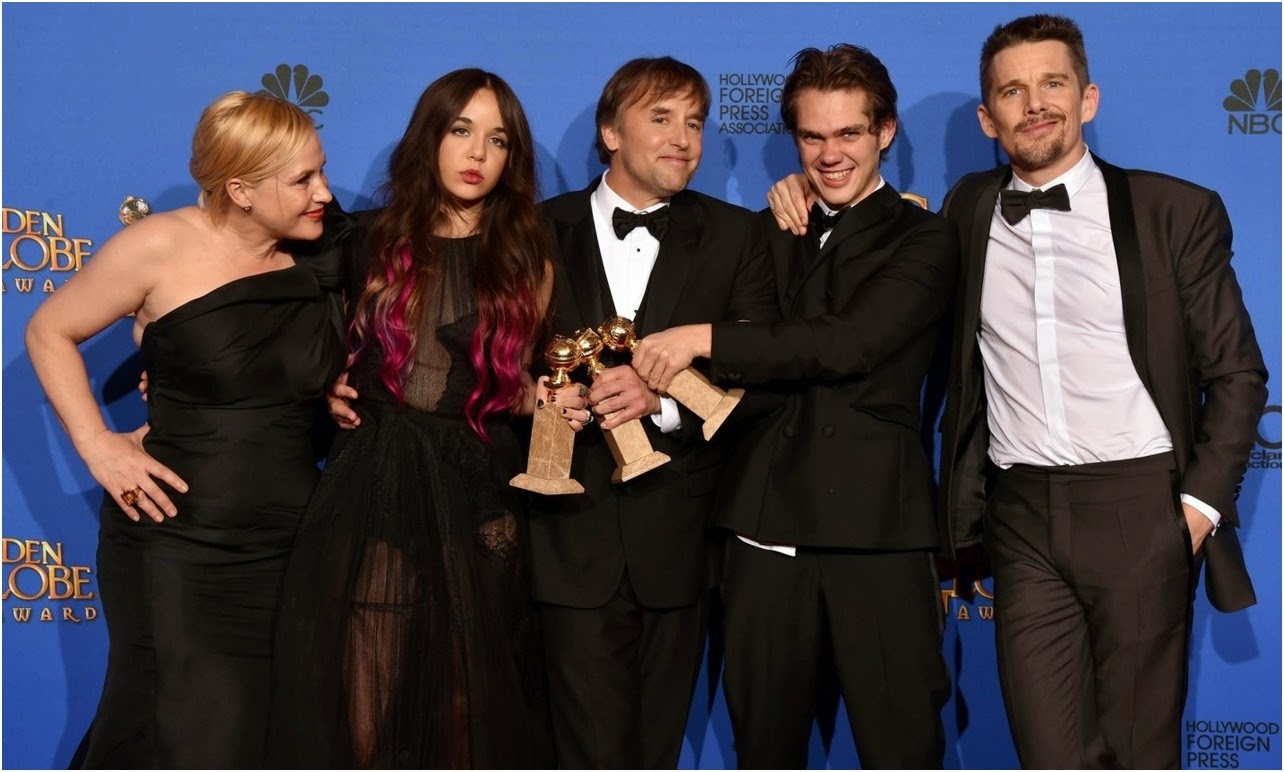 And that is it. I hope you enjoyed whatever this was. I'm going to leave you guys with a picture of hot George Clooney in a bathtub because unlike the Globes, I actually give people what they deserve (and we ALL deserve this). 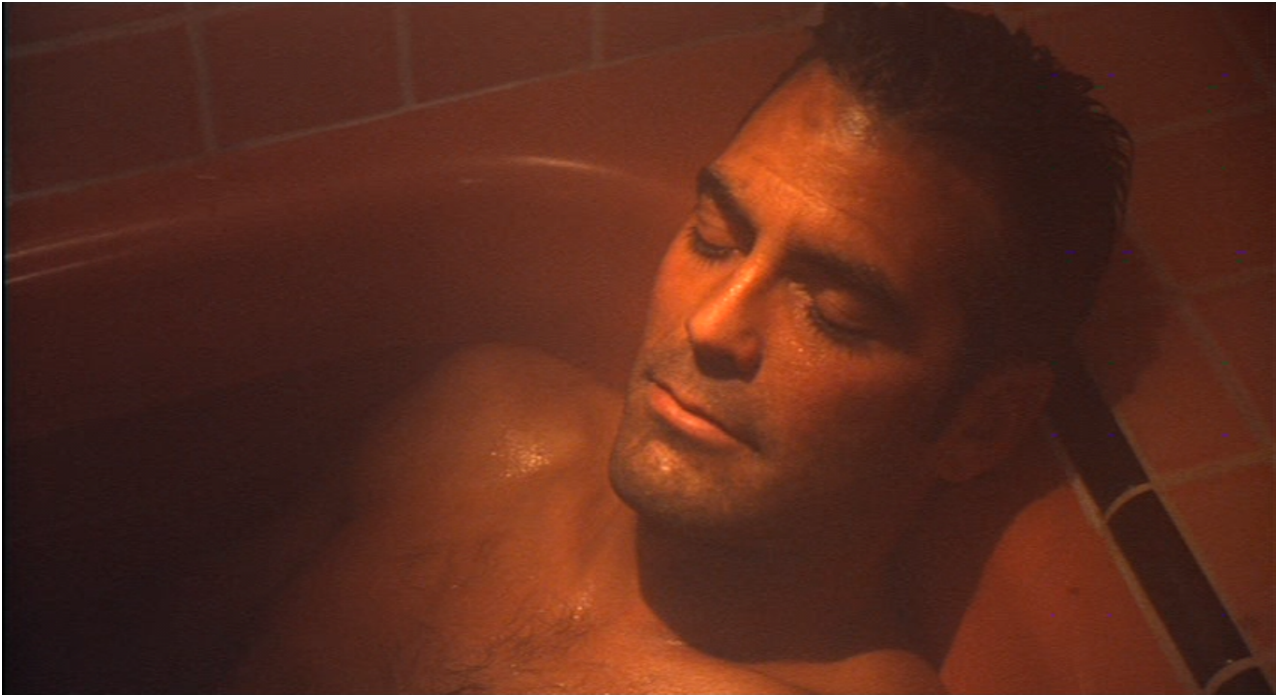