I finally saw Seven Samurai yesterday. It was the first proper Japanese film (I don't think Memoirs of a Geisha, Lost in Transalation or The Grudge count) and the first Akira Kurasawa film that I have ever seen. So you can say that I feel a bit..what's the word...cultured(!) right now.

Set in the sixteenth centure, it tells the tale of a village that has been suffering a lot of problems out of which the most alarming one is that a band of bandits keep robbing the inhabitants of their harvest, and as a result they starve. They decide to hire a band of samurai to help them defend their village against these mauraders. The first one to agree to help these suffering villagers is the war-veteran Kambei. He then recruits five more samurai- his right-hand man Shichirōji, the "interesting" Gorobei, the mediocre but funny Heihachi, the masterful swordsman Kyūzō and the young Katsushirō who wants to be Kambei's apprentice. The group is completed with the wannabe samurai and slightly mental Kikuchiyo. They return to the village and teach the villagers how to defend themselves. Then the attack by the bandits start and the samurai, along with the villagers start fighting, luring and killing them, in which many of them also lose their lives but for the greater good.

I thought it was a very well-made film and I absolutely understand why it has had such an impact all over the world. I mean it was a three and a half hour long, black and white foreign film, and I watched all of it (not continuosly as the rest of my family wasn't as intersted but I did finish it under six hours). However you would notice that in my "Recently Watched/Rewatched List" I gave it a 9.5 out of 10 rating. This is purely my fault. The thing is that I have seen so many Curry Westerns like Sholay and China Gate, and also other English films that have Seven Samurai elements in it like Ocean's Eleven, Gone in Sixty Seconds, hell even Rango reminded me of Kikuchiyo; that the film did not feel like anything new to me. If not anything that itself would be a compliment to how popular and universal it is, but still it was like a tale I had seen and heard so many times before. A '9' seemed like too less, but a '10' felt like a lot. I haven't seen The Magnificent Seven and I'm scared of Clint Eastwood, otherwise I would have been even more familiar with it. 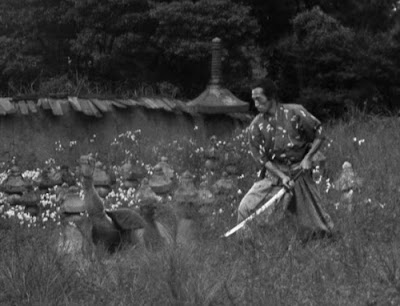 I really liked the characters of Kambei and Kyūzō. They were exactly like how I would imagine a quintessential samurai to be like- silent, wise, powerful and deadly. The others were good too, but these two will stick with me for the longest time, for the right reasons. I actually found Kikuchiyo and Katsushirō very annoying, but the scenes in the flowers-covered woods in which he and Shino, the peasant girl he loves, are together were very beautiful and just perfect. Probably those and the last scene, or even the very last shot were my favourites in the film.

A film this legendary is nothing without its master director Akira Kurasawa, who was also the co-writer and editor. I loved how involved all characters were in the film. It's about an entire village, and everyone seemed to be a part of it. It was very impressive direction, but what really blew me away about this film was its editting. Honestly I would think that in a film this long there should haved been parts that was supposed to be cut out, but I really didn't find such parts. Everything was exactly right and put together perfectly. I especially loved the part in the last scene when they show Shino singing and harvesting and Katsushirō's sad and silent face back and forth. One thing this film definitely did for me is to create a hunger to see more of Kurasawa's works.

Also I thought this quote by the village elder, Gisako was sort of epic-


"What's the use of worrying about your beard when your head's about to be taken?"

If you haven't seen it already, I definitely recommend it.
﻿
Posted by Nikhat at 5:19 pm