Sorry for being so late again, guys. This month has been a hectic/anxiety-inducing/avoiding any type of work kind of month so far. I've finally chosen where I'm going to do my masters. It's in a place called Noida which is near New Delhi. I'll be living on my own for the first time in my life- it's really exciting and scary. I don't know what's going to happen to the blog when college starts. We'll see when the time comes, I guess.

Anyway, May was a fairly good month in terms of movies and books. Not *as* much TV because I took a vow to give it up for two weeks if my flight from Delhi which was experiencing loads of turbulence would stop shaking so fucking much... and it did. Honestly though, I just wanted to see if I could do it. The number of TV shows below appears large but they were shows I was following weekly. No binging apart from Mad Men. This gave me time to read more, although I hardly read anymore so it's still not that much. Also, I caught up on some older movies that I had been meaning to watch for a long time but had been putting off to watch more recent stuff/TV. 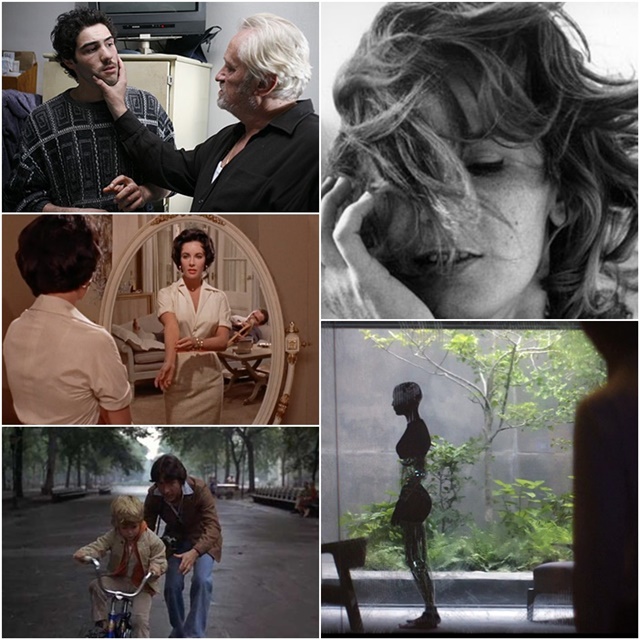 1) While We're Young- It was funny but it's probably my least favourite Noah Baumbach film I saw.
2) Wake Up Sid- It's been on my watchlist for the longest time. I quite liked it. Konkana Sen Sharma is so pretty.
3) Ex Machina- It's my favourite film of the year so far. It's really smart, and the kind whose brilliance dawns on you after you think about it. I loved its gender commentary and subversion. It's gorgeous to look at and fantastically acted and goddamn, that dancing scene!
4) Piku- It was very sweet although I did think that constipation as a theme was pretty weird. Irrfan Khan is so attractive.
5) Slow West- I liked it although I think you need to be familiar with/actually like the western genre to understand what it does differently, and I don't qualify for either of that so I don't really get the acclaim apart from how stunning it looked. Plus, Fassy in long-johns *adds infinite points to rating*
6) Mad Max: Fury Road- Excellent. Amazing. Gorgeous. Everything everyone said about it was spot on. Second favourite of the year currently.
7) Girlhood- Joining the ranks of all the people who said this is better than Boyhood. I especially loved the "Diamonds" scene (and I've been listening to that song non-stop ever since).
8) Fire- Super late blind spot. Pretty good, weird tantric porn music in the sex scenes notwithstanding, of course.
9) All That Jazz- Blind spot- Quite brilliant, especially Roy Schneider's performance.
10) The Age of Adaline- I watched it for the insanely hot Michiel Huisman and in that regard, I wasn't disappointed. Everything else in the movie is meh.
11) The Verdict- I read "Making Movies" so I thought I should watch a Sidney Lumet film after that.
12) Million Dollar Baby- I really expected to hate it but it was fine. I really did not like the score though.
13) Tie Me Up! Tie Me Down!- Stockholm syndrome brought to you by Technicolor! I liked it :P
14) A Prophet- After Jacques Audiard won the Palme d'Or for Dheepan, I had to check this out and lo and behold, I absolutely LOVED it! So, so good.
15) Spartacus- It was good but god, it went on forever.
16) Safe- Getting ready for Carol. It was terrifying and incredible.
17) Tomorrowland- Don't get the hate for it. I thought it was lovely and uplifting and beautiful to look at.
18) Alphaville- The story was interesting but god, the voice of Alpha 60 was painful.
19) Cat on a Hot Tin Roof- I really thought I had watched it but apparently not. I was surprised at how sexy it was. I prefer the play slightly more but good lord, how attractive were Liz Taylor and Paul Newman?!
20) Killer's Kiss- So I thought that I have finally finished Kubrick's filmography with this but turns out there's another feature he made before it. Anyhoo, I quite liked it. The acting wasn't the greatest but it was shot really well and the kisses were indeed great.
21) Results- It started out well but I think it lost its way in the middle. Guy Pearce is so fit in it.
22) Kramer vs Kramer- I'm also consciously trying to slowly make my way through the Best Picture Oscar winners. I thought this was great and very affecting.
23) La Jetée- Fantastic. Never seen anything like it but I absolutely loved it.
24) Much Ado About Nothing- Very fun especially because of Kenneth Branagh and Emma Thompson. Although, dafuq Keanu Reeves? 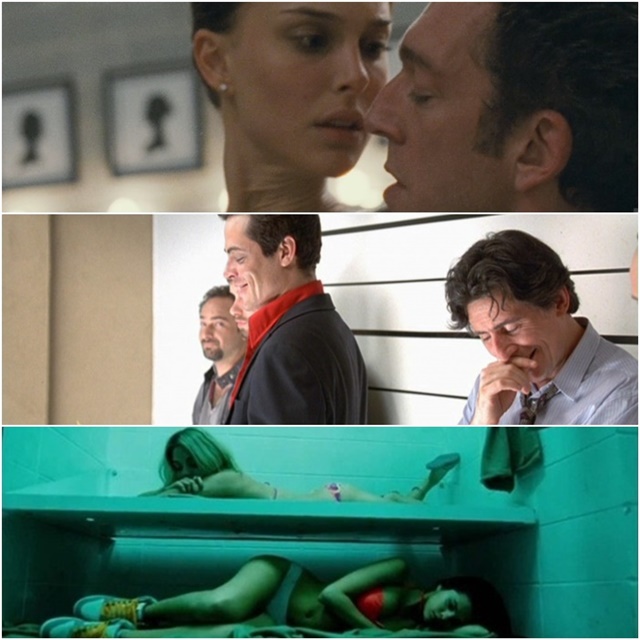 1) Black Swan- My friend went a little nuts over Vincent Cassel and that rubbed off on me so I *obviously* had to rewatch this.
2) The Avengers: Age of Ultron- Better the second time 'round imo. The excitement has settled down and one can focus on the script better.
3) Kingsman: The Secret Service- Fun! Fun! Fun!
4) Spring Breakers- I made my Lambcast debut! Woo hoo! Love this film.
5) The Usual Suspects- I'm also trying to rewatch old favourites that I've only watched once. The movie is as excellent as I remember.

TV shows: (skipping quotes because of the number of shows) 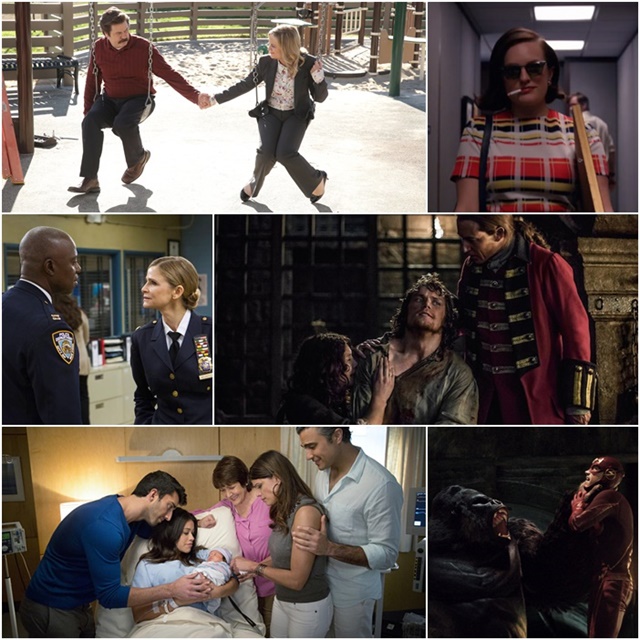 1)Parks and Recreation, season 7- Like the fucking idiot I am, I forgot to include this in my last monthly round-up. I love this show, forever and always. It was an excellent season with beautiful and hilarious episodes and great acting all around. I can't choose an MVP because all these characters were so special. My favourite episode, if I had to choose one, was probably "Ron and Leslie" because I loved the emphasis on the friendship of these two wonderful characters.
2) Mad Men, season 6 and 7- AAAAAA I finished watching the episodes just in time! I saw the last two episodes ever of this show with everyone else and it was awesome. I just wish I had started the show sooner. Again, it's difficult to choose a favourite season 7 episode because of the way I watched the show but it's probably "The Strategy" because of the Don and Peggy dance. Uhh MVP is hrd as well. I love Peggy, Sally, Roger, Joan and Meredith but everyone's acting is excellent. I suppose Jon Hamm, Elizabeth Moss and January Jones gave my favourite performances over all.
3) Brooklyn Nine-Nine, season 2- It had a lot of breaks so I am not sure whether this season was better than the last but I loved it all the same. a) Favourite episode- One image from this season that has forever been burned in my mind in the room with all the dolls. So I guess "The Road Trip" wins this title. I liked Sophia. b) MVP- Everyone in the main cast is great but I'm going to choose Kyra Sedgwick's Madeline Wunch. She's such a worthy opponent to Captain Holt.
4) Outlander, season 1- I LOVE this show. It's become one of my favourite shows of all time already. I love the characters and the central love story and how the female lead is placed up and centre of it all. a) Favourite episode- Well, "The Wedding" topped my favourite episodes list of last year. It's still probably my favourite but one also has to mention the most brutal episode of television I have ever seen, the season finale "To Ransom A Man's Soul" which is the flip side to "The Wedding" in regards to the way sex and intimacy is dealt in both. b) MVP- Both Sam Heughan and Tobias Menzies are excellent but Caitriona Balfe's Claire Beauchamp Randall Fraser is the show's heart and soul. Even in the last two episodes where the men have more memorable scenes, Balfe manages to equal them through her own subtlety.
5) Jane the Virgin, season 1- This has become one of my favourite shows of all time as well. I can't choose a favourite episode. I know I chose the first one in my year-end list but that's only because it needed to be represented. Every episode is great in its own way. I love all the actors, the Latin Lover Narrator, the visuals, the music, the telenovela elements mixed with the real emotional relationships in the show- ugh, everything is beautiful. Though I must give a special shout out to Jamie Camil who plays Rogelio, a character that would have been a caricature in lesser hands, and Anthony Mendez whose Latin Lover Narrator is a character in his own rights, the show would be nothing without the absolutely lovely and luminescent Gina Rodriguez. Her comic timing is matched by her ability to find new emotional depths in the crazy life that her character leads, and her chemistry with each and every actor on the show is top-notch. She can and she did, you guys.
6) The Flash, season 1- Heyyy this was fun! I don't love it as much as Agent Carter or Daredevil but I like the actors and the characters and the visuals are pretty good too. a) Favourite episode- "Out of Time". Just like, SO much happens! It's probably the most excited I was all season. b) MVP- Grant Gustin's Barry Allen is adorable but I have a soft spot for Tom Cavanagh's Harrison Wells. He's so deliciously evil. Love supervillains.
7) New Girl, season 4- This was a weird but a pretty good season. I liked that everyone was friends this season again. Much like Brooklyn Nine-Nine, this had wayyy too many breaks for me to judge it properly. a) Favourite episode- "Clean Break". It's a great episode but it would be here on the basis of that proposal alone. DAWWWW! b) MVP- I think this was a pretty good season for Damon Wayans' Coach. He will be missed. 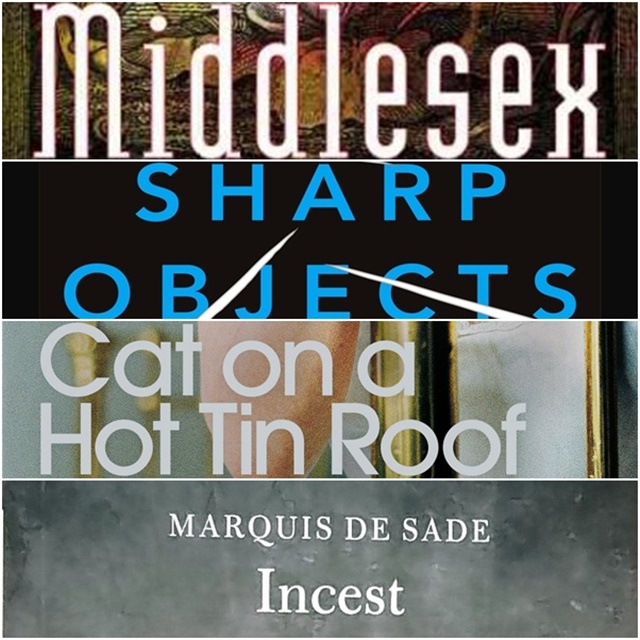 1) Middlesex by Jeffrey Eugenides- I thought the ending was rushed but I loved everything else about it. It's so fantastically written.
2) Sharp Objects by Gillian Flynn- Ooo this one was scary. I love the way Flynn's mind works. Also, I don't know how she imagines such awful women but it's fascinating.
3) Making Movies by Sidney Lumet- I have had this book for about two years now and I was done with hating myself for not reading it already. It's really good and informative and I have a lot of stuff underlined for hopefully the future.
4) Cat on a Hot Tin Roof by Tennessee Williams- I was getting desperate to catch up on my Goodreads Reading Challenge (which is only 30. Please don't judge) so I decided to read the thinnest books I own. I know it's a play but I own it as a book so... :P I really liked it.
5) The Importance of Being Earnest by Oscar Wilde- Trivial but so much fun!
6) Incest by Marquis de Sade- It was intriguing but I could have done without all the judgment throughout the book. Let me judge on my own! I know incest is bad ffs!

And that's it. No promises for what's to come this month :(