IT SHOULD HAVE BEEN SAM AND JOON 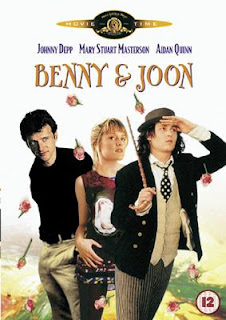 "I would walk 500 miles
And I would walk 500 more
Just to be the man who walks a thousand miles
To fall down at your door"
This is the chorus from I'm Gonna Be (500 Miles) by The Proclaimers, which is played during the opening credits of the movie Benny and Joon. At the end of the credits, we are shown a long-haired-top-hat-wearing-Buster-Keaton-reading Johnny Depp. Instant satisfaction.
Benny, played by Aidan Quinn is car mechanic with an artistic schizophrenic sister Joon, played by Mary Stuart Masterson. He takes care of her and thus has no life. But Joon still doesn't show any mental improvement and so he starts considering sending her to a special home.
Enter Sam, played by Johnny Depp- a clown of a man. Joon loses a game of poker and has to keep Sam, much to Benny’s annoyance. But Sam proves to be useful by...cleaning the house. He makes bread-rolls tap dance, he makes his toasts using the steam iron, he climbs trees and does Chaplin-like performances just to make Benny and Joon happy. Needless to say, Joon falls for him and he for her. Poor Benny can’t hit it off with pretty Ruthy played by Julianne Moore.
When Sam and Joon declare their love to Benny, he gets angry with Sam and throws him out. While he is out to buy tapioca to make Joon feel better, she and Sam run away. But Joon has a breakdown in the bus and is taken away to a hospital. 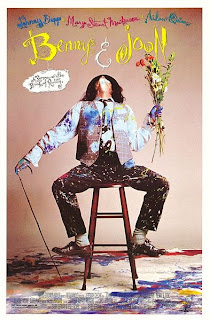 Joon’s doctor doesn’t let her see anyone. Both sad and depressed by Joon’s absence, Sam and Benny decide to join forces and get Joon out of the hospital. While Sam distracts the ward boys, Benny tries to talk to Joon. He tells her he wants her to have an apartment of her own and now likes Sam but she doesn’t believe him. She thinks that she has scared him away, and as Benny is explaining that that’s not the case, her doctor comes.
Meanwhile, Sam is told about the window to Joon’s room by Benny’s friend who worked in the hospital. Benny and Joon’s doctor inside are telling her to decide what she wants. As they are talking, Sam climb’s up the walls (in a non-Spiderman style), takes a hanging swing-kind-of-thing and at Joon’s final deciding moment swings by her window. It’s pure magic! 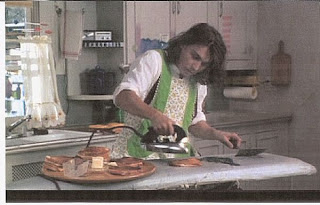 Then what, Joon tells the nosy doctor good bye and starts living in Ruthy’s apartment with Sam. The last scene of the film shows us Benny leaving a bunch of roses by their door as Sam teaches Joon how to steam iron toasts.
Narrating Benny and Joon isn’t remotely as impactful as watching it. Especially because the genius of Johnny Depp is indescribable in words; it can only be seen and felt and worshipped. I honestly believe that Tim Burton must have decided then and there itself that he is going to play the Mad Hatter in the oh so very eagerly anticipated Alice In Wonderland. Sam is one of Johnny Depp’s best role to date, despite the fact that which one isn’t. It is absolutely amazing to watch him and all his eccentricities. Sam is such a dream man, after all which girl doesn’t want a guy who can clean the house, make her laugh, wears suspenders and a top hat, and looks like that.
This movie is as sweet as possible. The subject matter is in reality so complex and delicate but with all the added charm, it is one of the best romcoms of the past century. It’s magical in so many ways- Sam in himself is somewhat a Prince Charming. Mary Stuart is also quite convincing in her role. Joon is soft and caring and weird and quirky. She and Sam fit together.
Aidan Quinn was kind of a bore and the only downside to this movie. Even the nosy doctor and Sam’s evil cousin are more interesting. Julianne Moore looks spectacularly pretty and well that’s about it. This was a complete Johnny Depp film and should be watched by all the lovers of him, romance, and life in general. 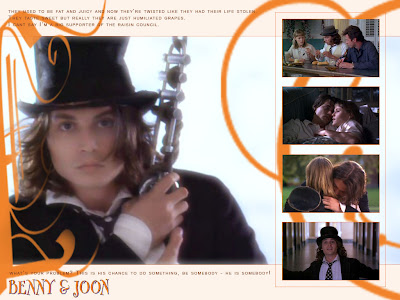