THE PURPLE ROSE OF CAIRO 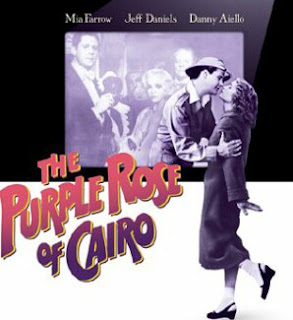 Cecilia went to the Cinema ever so often, with the popcorn in her hands and a glow in her eyes as she saw perfection played out onscreen. Oh how beautiful it was to see glamour and beauty and heroes and Jazz and happy endings.

Real life was quite the opposite. In the real world, she was an unhappy, nervous waitress with an unemployed, abusive husband during the Great Depression who lived in . The Movies for Cecilia provided the only escape from her sad excuse of a life. She would keep trying to leave her pathetic, unappreciative, alcoholic, gambling, beating bum that was her husband, Monk, but he was always right when he said she’d come back.
However, one day, this new movie called The Purple Rose of Cairo came to town. She went the first night alone and again the second night with her fellow-waitress sister. She felt more than lost in the movie with the dashing Gil Sheperd playing Tom Baxter- of the Chicago Baxters, explorer, and adventurer. The third day unfortunately, when she was all sad about not being able to leave her husband again and extra nervous in the restaurant, she dropped her third plate and got fired. As real world became way too horrible and well, real for her she went to her usual Utopia- the Cinema to watch The Purple Rose of Cairo again, and again, and again. Except the fifth time something very unusual happened.
Tom Baxter looked at her and spoke to her right through the screen. She and the rest of the audience were shocked! As were the other characters in the movie. And then the most amazing thing happened when he walked right through the screen...into the real world for our Cecilia.
Tom and Cecilia ran to a closed-down amusement park where Tom declared his love for her. Cecilia couldn’t believe how perfect he was! They went dancing later that night after Cecilia made an excuse to Monk to get out. He gave her the most perfect kiss in the world.
But the real world and the reel world shouldn’t meet. While Cecilia and Tom were frisking in the pros of such a rendezvous, the other characters, the cinema owner, the producer and Gil Sheperd were facing a lot of problem. They all came to , that is the real people, to find a solution. It is then that Cecilia meets Gil the next morning.
She was totally spellbound. He was her favourite actor and she couldn’t believe her luck. Gil is very flattered by her and begs her to take him to Tom. Cecilia reluctantly agrees and then when both men meet, they start fighting as Tom declares that he wants to be a free man in the real world and live with his love Cecilia and Gil tells him that he is fictional and cannot do so because, “You can’t learn to be real, it’s like learning to be a midget. It’s not a thing you can learn.” But Tom still doesn’t want to leave. So he and Cecilia go walking around the town. Tom learns about child-birth and God and how God was like the writers Irvine Sachs and R.H. Levine. At the Church Monk confronts them and Tom and he get into a fight in which Tom loses only because the ‘real’ Monk plays unfair. Cecilia stands up to Monk and saves Tom, who doesn’t have a scratch or a single hair out of place, as those are the advantages of being imaginary.
When Cecilia gets back home, she sees Gil over there. They talk even more and she woos him completely, unintentionally of course. They go by a music store where he buys her a ukulele and sings to her music. Then they recite out lines from his musical after which he kisses her but she leaves him because according to her, “I met a wonderful new man. He’s fictional but you can’t have everything.”
When she returns to Tom, he takes her back to the Cinema where they both enter the screen and go to the Copacabana and introduce the concept of ‘free world’. Then they hit as they go to all the clubs and all the shows and dance the night away, completely in black and white and love. But then Gil comes to the Cinema and asks Cecilia to come with him to . Tom tries to stop her and tell her how he is honest, dependable, courageous, and romantic and a great kisser but Gil wins the argument by saying that he is real. Cecilia chooses the real guy over the fictional one as she explains to Tom how “in his world, things have a way of always working out.” Tom feels crushed, goes back into the screen, and watches on as Cecilia leaves with Gil.
She rushes home and packs up her bag to leave as Monk tries to stop her but then screams out that she’ll be back as she leaves. And as she reaches the Cinema where Gil had promised to meet her, she finds out he left with everyone else as soon as Tom went back into the screen. She walks into the Cinema to watch the next movie, Top Hat with Fred Astaire and Gigi Rogers singing “Dancing Cheek to Cheek” as she forgets her blues and the real world and how she too danced cheek to cheek with Tom, and gets mesmerised by the Movies all-over again.
The Purple Rose of Cairo is made by the brilliant Woody Allen, who is rapidly becoming my favourite filmmaker. The gorgeous Mia Farrow plays the woeful and lovely Cecilia and Jeff Daniels plays the perfect Tom (though fictional) and the heartbreaking actor Gil.

This movie was so very special. It reminded me of all those films during the course of which we want to live and die. Marie Antoinette for example- the complete beauty and atmosphere and setting and music and clothes and food was so mesmerising that one cannot hope enough for life to be like that. Even Twilight, when I saw it first and knew nothing of it and what it will turn into, was so unrealistic and desirable with the unnatural blueness, and the romance and everything. Obviously now I find it revolting but it was almost magical in the beginning. Also Nick and Norah’s Infinite Playlist- the incredibly pretty Kat Dennings and oh so cute Michael Cera and the entire brilliance of the one night was what makes one want to live for.
However, the sad and real ending of The Purple Rose of Cairo was more heart wrenching than most of the films I have ever seen. I loathed and loved it at the same time as it shows the unrealistic feel of the real world and the perfect life-like appeal of the reel world. When it was over all I could think of was this sort-of speech of Andy Warhol’s after he had been shot and truly understood what he meant. 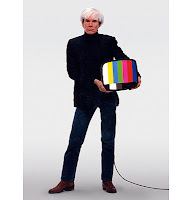 “Before I was shot, I always thought that I was more half-there than all-there. I always suspected that I was watching television instead of real life. People sometimes say that the way things happen in movies is unreal, but actually it’s the way things happen in life that’s unreal. The movies make emotions look so strong and real, whereas when things really do happen to you, it’s like watching television-you don’t feel anything. Right when I was being shot and ever since, I knew I was watching television. The channels switch but it’s all television.”
- Andy Warhol
Posted by Nikhat at 4:00 pm